Is this a defect, is this normal for this Chanel item?

Please post any questions about defects or if things are normal in this thread. Thanks!


I bought a WOC while traveling abroad a few weeks ago, and now that I'm examining it, I'm noticing that the quilts are not properly aligned. Would you consider this a defect? And can it be fixed? Unfortunately, I'm past the return period and no longer in the country I bought it from, so hopefully it's normal for this bag? 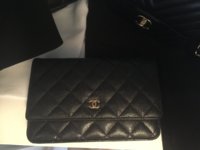 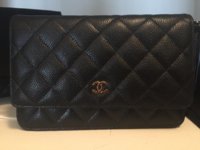 the second picture makes the WOC look slightly off. I dont think its a true "defect" per se, but it would bother me. try pushing it in the opposite direction. if not, try to see if ur boutique will allow an exchange
Reactions: VertColSwift
•••
K

I recently got my first Chanel, a Jumbo with gold hardware. There was a defect with the first one with stitching and I sent it back to Chanel at Bergdorf Goodman to have it exchanged. I opened the box at home and immediately my fiancé and I noticed that the hardware did not seem to be as gold in color as the first bag, it seemed paler in comparison. I thought it was lighting, but we brought it outside in the natural light and it seemed to be the same. Has anyone else noticed any variations in gold coloring?

I also noticed that the hardware was covered with a clear plastic covering instead of the blue I had for the first bag. There also was air bubbles in the plastic covering with a bit of dust stuck inside, like someone has stuck it back on after it was removed. On the clasp, there was a single hairline scratch on the turnlock. I'm sure with use over time there will be scratches too, which isn't an enormous deal. But, I'm a bit uneasy knowing I purchased something new and it's not perfect. I think the bag might have been an return? Would they usually sell Chanel bags that have been returned?

My SA has been very helpful so far, but I'm not sure if should give them another call? Or am I making a big deal out of something minor? haha
Reactions: VertColSwift
•••
N

I was lucky to purchase this 18C small chevron backpack from Saks and while its in otherwise perfect condition, I noticed there is a missed stitch under the flap where it bends to close (it’s hard to see but I tried to get a close up of the frayed ends) I plan on using this daily so I’m worried the stitching might eventually unravel from opening and closing. I’m always careful with my bags but I don’t want to baby this piece either. Does anyone have this season’s backpack or similar issue? Should I return this piece completely ? I’m adding pictures below! I appreciate any advice, thank you in advance! 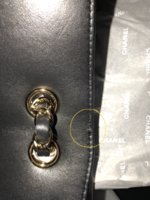 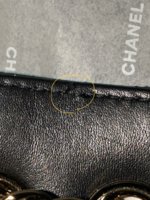 Use it. Enjoy it. *If* it becomes unravelled deal with it at that point. Send it to Chanel for repairs or send it to one of the recommended repair people that others use in this forum. I highly doubt it will be an issue.
Reactions: Justforfun123! and Natty14
•••

I'd ask for a credit from saks and keep the bag - you can get something like this repaired if it becomes a problem.

Is there another you can exchange it with?
Reactions: Natty14
•••
S

I would return the chvron backpack because it's a brand new bag from saks, and you shouldn't need to settle, even if it is a Chanel backpack. Just my two cents.
Reactions: rma7, stepmum, AM2021 and 7 others
•••

That probably wouldn't bother me too much. since it's under the flap. Since it is current season, see if you can exchange, before you settle to keep it.. You might be able find one without that stitch issue.
Reactions: Ricks Krispies, shopgirl4cc, Natty14 and 1 other person
•••

I wouldn't settled if it bothers me. For my $$$ hard working earned, I would exchange if it were me.
Reactions: rma7, Ricks Krispies, spicestory and 2 others
•••
C

Exchange it or wait for new shipment. They will have more. It would bother me. U might need to fork out some repair costs later if it gets worse. Plus the hole is so big you’re gonna think about it every time u open up that flap !
Reactions: stepmum, cherriefairy, Myybags and 4 others
•••
N

gail13 said:
Is there another you can exchange it with?
Click to expand...


I doubt it, I was on the waitlist for this and they only receive a few.

Thank you for all your help! It's funny because if it were anything else with a loose stitch/defect I would have no problem asking for an exchange or returning it. But since this Chanel backpack combo is hard to find in general, I hesitate to do what makes most sense - return the bag lol. I am going to see if my SA can exchange it but most of you are correct, I should not settle, especially at these prices.

Thank you again!
Reactions: Gabs007, Ricks Krispies, spicestory and 2 others
•••

Any info would be greatly appreciated x

Any info would be greatly appreciated x
Click to expand...

Have you tried calling the customer service number to ask?

Honestly I would be surprised if they could repair or replace it because when I mentioned pearls and crystals falling out of brooches my SA said they can only replace or repair if Chanel still had the material in stock - so if it was from a few seasons ago it is unlikely they would be able to.

Also if you don't have a receipt or an existing relationship with an SA it would be harder to make this happen, but it doesn't hurt to ask . Good luck!!
Reactions: Sarenkaldn
•••
You must log in or register to reply here.
Register on TPF! This sidebar then disappears and there are less ads!
Sign Up
Top