thanks! I just now noticed he matches our kitchen curtains.... haha

336- I am surprised your cat puts up with Coco! I am not, however, surprised that Coco went up to the cat. haha. My favorite thing about lovebirds is their utter lack of fear. It does make it hard to cook dinner, though! Even though she's reluctant to leave her cage, I bet it won't be long until you can't get her in there at all. In the past couple of months our bird has finally gotten comfortable going back in his cage for snacks- for a long time he wouldn't go near it for fear we'd lock him back in.

Melissa71 said:
Awww, I love the stories and pictures of everyone's birds. We have an African Grey Congo named Harley, and a Quaker parrot named Hank. They both talk, and are so much fun!
Click to expand...

We have a quaker bird too but he does not talk. Does your quaker have feathers missing from chest like mine? I guess that's a common thing ?

Had to bump & add this... this is my From-Sunrise-to-Sunset aka "Sunny-lala". We adopted her after my Makalii (see previous "devil bird" post) flew to rainbow bridge. 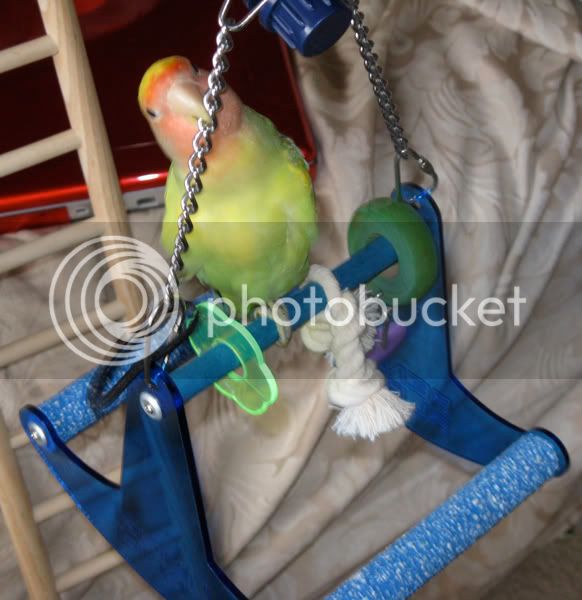 I call her a "she" becuase when i picked her out, I wasn't sure if she was a boy or a girl, and then she started having similar behaviors to my mom's hen. However, I'm almost entirely convinced that "she" is actually a "he" after all. But, i'm already used to calling Sunny a "her" so there we are. She's a pied peachface.


For those of you that have lovies, I recommend a forum called Lovebirds Plus Community... great friendly lovie owners! They also have smaller sub forums for other parrot types.

^She's gorgeous! My lovie has a swing like that, too.

I really like the lovebirds plus forum- I found it because Beaker had a lot of feathers on the bottom of his cage. I was panicking thinking he was plucking his feathers (even though he didn't have any bald spots) because it seemed like he was constantly preening until I found that forum and learned that it was molting season. I felt so stupid! Haha. I think I would have realized if I gave it a little more time, because he started to get in a lot of new feathers after that. But there are some really knowledgeable people there.

Its how I've learned how to introduce veggies to my bird- he was weaned onto seeds and it took a long time for me to get him to eat anything else. He's still not 100% interested in them unless we're eating them- of course he wants anything we have! haha.
T

I had two Budgies in the last 3 years. The first passed away from some sort of kidney problems at the vets, and the second we ended up passing along to my MIL when my FIL died as she needed a companion and couldn't cope with a dog.

It worked out perfectly - we still see him regularly and he's actually getting much more attention now as she doesn't work, unlike us. All the neighbours pop in and chat away to him all day long.

I have to say though that having birds is soooo different than you think it's gonna be. Nobody ever tells you how LOUD they are!

I'd love a larger parrot, and for a while was considering moving on to larger ones once our guy had passed on to his aviary in the sky, but then I realised how much louder big birds are, and also how much attention they need.

My DH was finding the budgies noises to be almost driving him to insanity when he was trying to watch TV - who knew he had ears like a dog? I could tune it out, but he was wincing every time there was a particularly shrill cry.

Another thing that put me off is how long they live. Who wants to outlive their pet? And African Greys can become very possessive. I don't want that from my DH, let alone a pet!

So fair play to all you guys who have opened their homes to larger parrots. I am full of admiration - it's not easy!
You must log in or register to reply here.
Share:
Reddit Pinterest Tumblr WhatsApp Email Link
Register on TPF! This sidebar then disappears and there are less ads!
Sign Up
Top Bottom