On September 20, Rolling Stone put out a list of what they want to see happen before they pay money for this year's Rock and Roll Fantasy Camp. The list includes:


Three days ago, they put this item on their website:

Roger Daltrey and Slash (who played "Sweet Child O' Mine" for the first time in a decade) perform with camp attendees during the 10th Anniversary Of The Rock 'n Roll Fantasy Camp on November 9, 2007 in Las Vegas.


I think that's very exciting. I love that song. The guitar is genius, the vocals are genius. It's one of those songs where it's fun to sing karaoke but it's almost blasphemous if anyone else sings a cover of it.

I have to send this to my mom. You do not know how many times I heard this song growing up. She was a guns n roses fanatic!! 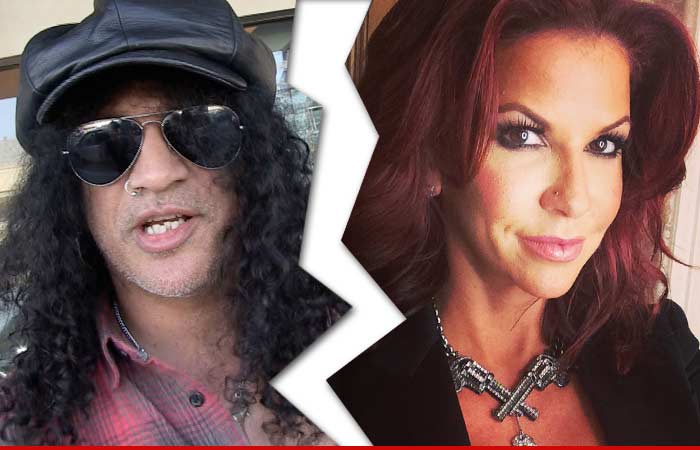 Slash's marriage is on the rocks -- TMZ has learned his wife has hightailed it out of L.A. and is already saying they're separated. Sources close to the couple tell us Perla unexpectedly flew to Hawaii over the weekend with their 2 boys, and threw down a deadline of sorts -- telling Slash they need to work out their issues by New Year's or else.

It's unclear exactly what the issues are -- they've had plenty of blowups during 13 years of marriage -- but one source says ... "this time it's different." Although Perla is telling friends this a separation, we're told she hasn't filed legally.
We called Slash's reps -- they haven't gotten back to us -- but TMZ broke the story back in 2010, when Slash filed divorce docs ... only to withdraw the petition 2 months later.

We're told no one's mentioned the 'D' word this time around ... not yet. That could be especially messy since Perla is Slash's manager and runs all of his companies.
Welcome to the jungle.