Okay dolls, The genius that is Daniel Lee

has shown his Resort/Cruise 2020 Collection.

Here is the write-up for Resort 2020 courtesy of vogue.com

MILAN,JUNE 12, 2019
by LUKE LEITCH
Absent from the rack at Bottega Veneta’s comprehensive Milan presentation of 70-or-so Pre-Spring men’s and women’s looks—plus bags, shoes, jewelry, shades, and other accessories—was a men’s reverse racerback black rib vest worn above a tailored black pant and beefy black loafer. It was a right, old nipple-flasher. As we searched in vain for the garment (it was en route from the atelier) and contemplated its image this morning, Daniel Lee ventured: “You’ve got to have a bit of humor.” Then he added this aside: “I think there’s a bit of misconception around me as well, that I am super serious because I’m not on Instagram. I just don’t like it [Instagram], but that doesn’t mean I’m serious!”

As we moved on to a thin rib-knit sweater in a dense and slightly spongy black cotton that featured a knotted extrusion running from outside the right shoulder into an opening by the left, Lee was asked if there was any other reason for the seriousness misconception. “I guess it’s because of the kind of clothes that I make….and Bottega is a very grown-up house, for sure. And I do think in the market right now there is a space for that which is very relevant. But it is something we can have some fun with, too—just thought-through fun.”

Bradford-raised Englishman Lee was made creative director at this most sophisticated but undeniably austere of Italian houses only 11 months ago. Early reactions have been positive where it counts most: ready-to-wear sales have since tripled across all markets and now make up 15% of total revenue. Yet that doesn’t mean that Lee—who seemed relaxed and affable despite the black-suited pin-drop atmosphere of BV’s corporate culture—is afraid to change lanes when the instinct grabs him. He said: “This season…we stepped back and analyzed what had worked so far, what was strong and also where I felt we needed to improve.”

Which leads back to that notion of seriousness. Of his last collection, Lee said: “I didn’t think it was so successful when things became too cool and hardened. I don’t think that really reflected me. Bottega Veneta, and Italian culture in general, is something that feels very warm, friendly, and inviting to me.”

That this review hands a lot of quote space to Lee reflects that he has seemed an enigmatic presence since arriving here. There is that lack of a social-media second life, plus his decision not to speak after his debut runway collection, and the fact that his last gig was at Celine—a pre-BV CV entry that brings its own particularly loaded flavor of scrutiny. Yet during the time not squandered posting Facetuned vacay selfies, Lee has evidently drilled deep to mine some brand-consistent building blocks with which to reconstruct Bottega Veneta his way.

The moulded raised-square gridding on the bibs of menswear and womenswear shirting and women’s skirts was, like the heat-pressed ribbing at the waistline of a deadly chic leather trench for women and on the leg of a men’s short track pant, inspired by Milan’s culture of industrial design. Along with the semi-sheer fitted knit dresses, plus sweaters for men and women in ribbed cottons and wools, plus leather dresses (a version in orange was especially entangling on the eye), this emphasis on connection and pattern was, of course, a reflection of the house’s Intrecciato DNA: tying together and the patterns that result. Bottega Veneta’s traditional medium, leather, was well represented in the rattan-esque gridding found on a beautiful women’s coat (its pattern reflected in a gridded gold-sequined dress), as well as in trenches and jeans for both genders that featured diagonally bottomed leather paneling atop their respective gabardine and denim.

In menswear there was a surprising emphasis on tailoring. Even without inserted circular panels at each hip pocket, a BV evening suit was a surprising thing, but the softly boxy luxuriousness of its cut and mostly cashmere flannel fabrication (strong in powder blue), fit well both against the more overtly evening womenswear looks and the more casual men’s. These included double-faced knit tracksuits with inverted seaming (something echoed in a fine white boiled wool skirt and cardigan for women) and some long, crispy cotton trenches, which were a feature for men’s and women’s.

Bags were predictably want-able, but not predictable. A wrist-slung, tightly knotted bag in blue, tan, or orange strips of soft matte leather and a loosely knotted perforated tote were two especially comely Intrecciato models. A sandal and raised mule in fake snake featured three and a half encirclements of leather strip that ran from the Achilles upwards: these worked to cinch Lee’s expertly cut wide-leg pants and were complemented by similarly functioning bracelets.

To fulfill his brief for Bottega Veneta, Lee must reconcile many apparently competing factors. He has to make its output feel like it’s fit for the future yet rooted in the signatures of the house’s heritage. He wants to speed up its rhythm and seasonality while ensuring that the deep deliberation in the craft of its designs remains on full display. This collection suggests he has the breadth of vision to gather in all these strands and compellingly tie them together.

First up - The Men's Collection

Next up - Women's Wear

Next up - detail shots: 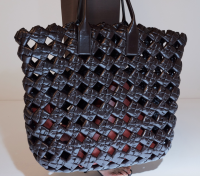 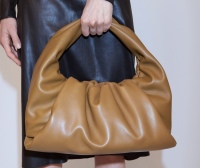 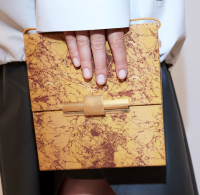 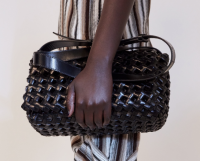 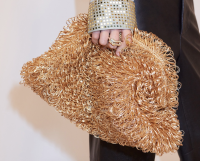 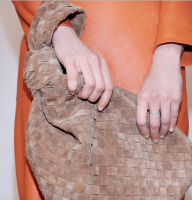 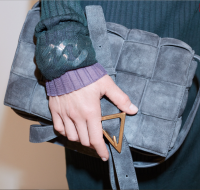 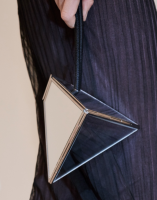