Help me solve the mystery of 13" laptop in Mini Belt

I've been planning to get a Mini Belt bag for months now, but when I went to the store to buy one I tried putting my Macbook Air 13" in it, and it was not possible even diagonally. Maaaybe I could've forced it in, but of course I wouldn't, either on a bag I own or in a store.

Now to the mystery. In a reveal film from MelSoldera I can clearly see her pulling a 13" Macbook out of a Mini Belt! Makes her look like a magician... cause I can't figure out how!

It can't be a big Belt bag because it has the shoulder strap, and she states herself that the computer is 13". And I know for sure that what I tested was the Mini, not the even smaller version.

Does anyone have a Mini Belt bag and puts their 13" laptop in it and can help me understand how it's done? Thank you so much in advance!!

Maybe it has to do with the type of leather? I think mine's the same kind as hers and I was able to fit my 13" MacBook Pro in it. It's a tight fit though! I crammed mine in there in these photos but I wouldn't try to zip the bag.

Edited to add: my husband said that the MacBook Pro & MacBook Air have slightly different dimensions depending on the model. That could be a factor too. I have the 2016 13" model. 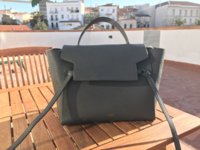 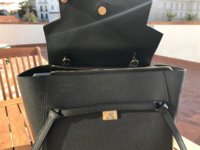 Thank you so much! Beautiful pictures, both the bag and the backdrop!

Wow – I think your husband solved it! I never considered that the Air would be bigger, but looking at it it does have a lot of "margin" around the keyboard, and here's what apple.com says:

This means I should wait getting my belt bag until I get the 12" macbook... But at least the mystery is solved! Thank you so much and a BIG THANK YOU to your husband as well!!

My peace of mind has been restored