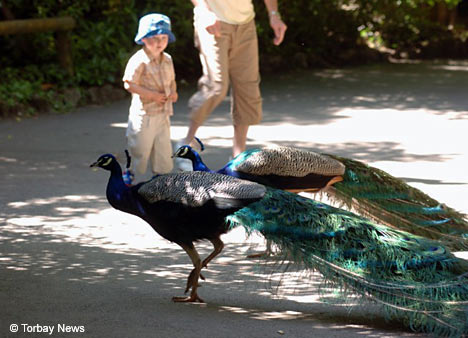 Visitors to the zoo enjoy watching the free-roaming peacocks

Beautiful birds: A male peacock makes a high-pitched noise during the mating season, which lasts for six weeks' a year 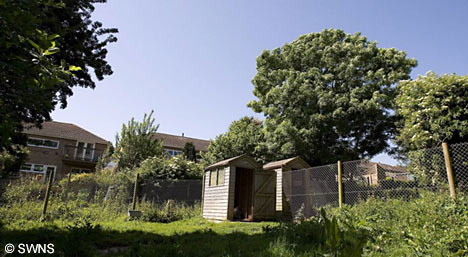 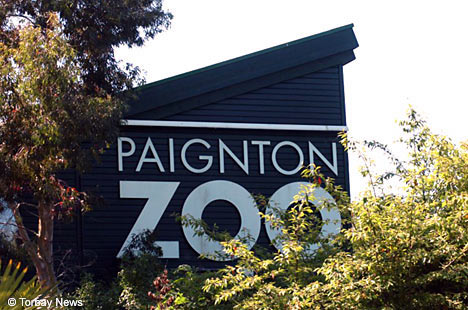 Zoo staff were left heartbroken after a flock of peacocks was killed by vets - because they disturbed neighbours living nearby.


The seven birds, who had roamed Paignton Zoo freely, much to the delight of visitors, were killed by lethal injection.
The shock decision to put down the birds came following complaints from just two neighbours living near to the zoo.
They claimed that seven of the zoo's 100 peacocks which roosted under an ash tree near the perimeter fence were using the branches of the tree to hop over into their gardens. Most residents were pleased to see the magnificent birds and fed them with birdseed and bread.


But one neighbour on the street complained to Torbay Council that his garden was being damaged and covered in bird mess.
He also complained the animals were making too much noise by squawking a high pitched call which he could hear from his house.
Environment Health officials were called in and, after months of debate, the seven peacocks were killed by lethal injection.
The council says that had it received complaints from at least two people. The zoo was unable to find new homes because of the bird flu scare and was unable to move them to a different part of the attraction


Chief executive Simon Tonge said peacocks are so territorial they would have returned to the same spot under the tree.

Eventually the zoo was forced to kill the seven male birds and chop down the tree to stop more roosting there.
Mr Tonge said: "I hate this, but I am being forced into it. There is nothing I can do.
"It has upset a lot of people and especially me as I am in the business of keeping birds alive.

"I can understand people being upset when the birds are right under their windows and we tried moving the peacocks to the other side of the zoo, but they just made their way back.
"We have been forced to do the cull because unfortunately we can't even give these birds away. "There is no demand for them due to the avian flu scare as they are related to chickens."


Zoo spokesman Phil Knowling added: "It is very upsetting for us. We were left with no choice at all.
"One person made persistent complaints. Environmental Health officials were very good about it, but said something had to be done. "It is very sad that complaints from one person could lead to this. We tried and tried but the resident was insistent."


Trouble began last year after a handful of peacocks roosted under the tree and hopped over the zoo's boundary wall into Harbourne Avenue.
Many residents encouraged the birds with handfuls of seed but one complained about them messing on his lawns.
The male birds were also growing new plumage in preparation for mating season which causes them to making a high-pitched noise.
The loud calling lasts just six weeks during May and June when the peacock's magnificent tail feathers grow.
But one man complained to Torbay Council's environmental health department and demanded a cull of the worst offenders.
Mr Tonge added: "We have a row of houses on our boundary, some of the neighbours love the birds, and some don't.
"Some feed the birds and, being free-roaming, they will go whenever they think there is a handout.
"In May and June the peacocks grow their tails, become territorial and shout to high heaven.
"But it is just for six weeks of the year and the rest of the time they are silent."
Zoo officials were in talks with council officers over how to solve the problem but eventually keepers took the sad decision that a cull was the only option.
Staff were visibly upset when a vet arrived to administer a lethal injection on Monday.
The council deny the complaints were made by just one resident - and say they had complaints from at least two people.
A spokesman said: "We can confirm that we have received two complaints from two neighbours in the past year relating to this issue.
"The complaints have been about noise and damage to property at Harbourne Avenue.
"In accordance with our standard procedure we have been working with the zoo and the complainants to resolve this matter.
"However, we have been informed that the zoo has decided to take matters into their own hands and have implemented a cull."
Residents in the street say their exotic neighbours had become welcome guests.
Susan Legassick said: "The peacocks are an attraction, a part of the community, and I love them.
"It is disgusting that they have been killed. They don't do any harm to anyone, they are very friendly. They come looking through my window asking for food.

"I think it is nice listening to them call, not disturbing. Why anyone wanted them put down I will never understand."
Neighbour Derek Gresham added: "When my relations visit from America and Canada they love to see the peacocks, they are my neighbours.
"Killing them is terribly unfair."
But another added: "They make noise at first light and come into the gardens and leave their mess. "If the zoo can't control them then culling them is what they have got to do."

I find that very disturbing that a zoo would choose to kill their animals due to some noise complaints... Zoos are here to protect, preserve and teach people about animals... what sort of lesson is it that an animal is OK to kill since it annoys you? Where is this zoo??
•••

well that's depressing. this world is a self centered place.
•••

hold me back, girls

this is disturbing on many levels.
•••

That sucks...there was not a single preservation or sanctuary that would take them? I find that hard to believe.
•••

Blue824 said:
I find that very disturbing that a zoo would choose to kill their animals due to some noise complaints... Zoos are here to protect, preserve and teach people about animals... what sort of lesson is it that an animal is OK to kill since it annoys you? Where is this zoo??
Click to expand...

That's ridiculous. We used to have them come in our yard all the time, and my parents loved them! They are beautiful and they sound lovely, plus the ones that would appear outside of our house were always friendly and unaggressive. I hate the idea of those beautiful birds being killed. That doesn't make a bit sense.
•••

They are seriously annoying as hell during their mating season... but no reason to kill them.
•••

ViciousBliss said:
well that's depressing. this world is a self centered place.
Click to expand...


The human world yes, people have gotten so arrogant they refuse to share their space with creatures who were here first.
•••

OMG! How distressing! There are some really horrible people in this world! Imagine having it on your conscience that you were responsible for having those beautiful creatures killed but ooops sorry people like that have no conscience. I am so angry right now! Sad little lives with nothing to worry about only their precious gardens, duh!
So sad that because of the bird flu the zoo couldn't find an alternative home!
I honestly hope there will be a mini tornado just on that persons garden & they will have more damage then the birds could ever do, bad I know but heck they deserve it!

This is terrible! I can't understand why they would kill such beautiful animals for nothing. If these people don't like loud noises then why did they choose to live next to a zoo? The peacocks are only doing what they are biologically wired for.
•••

I just thought of something, if the Zoo chopped down the tree that the birds were nesting in then why the need to cull them?
•••

Blue824 said:
I find that very disturbing that a zoo would choose to kill their animals due to some noise complaints... Zoos are here to protect, preserve and teach people about animals... what sort of lesson is it that an animal is OK to kill since it annoys you? Where is this zoo??
Click to expand...

The Zoo is in England. Here's a link.

Poor poor birds!! I love peacocks, they are so gorgeous, I hope that somebody finds out what neighbor was so persistent and gives them hell!
•••
You must log in or register to reply here.
Register on TPF! This sidebar then disappears and there are less ads!
Sign Up
Top