Courting the Superwealthy at Cartier Atelier

Eager to Keep Its Luster,
The Jeweler to Maharajahs
Takes Its Cases on the Road
May 22, 2008; Page D8

Bel Air, Calif.​
Several dozen philanthropists, art enthusiasts and ladies who lunch gathered in a private home here last week to discuss art sauvage and Cartier jewelry. It was almost hard to tell it was a marketing event.
Andrew Bolton, assistant curator for the Metropolitan Museum of Art's Costume Institute, was the afternoon's star attraction -- or nearly so, as he was competing with a 51-carat, yellow diamond ring and several million dollars worth of other jewelry that was strewn among peonies and orchids on the banquet table. 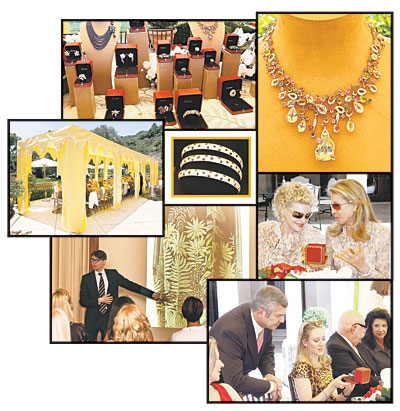 But over Maine lobster and Cara Cara orange confit, the folks from Cartier were hard at work attempting to rejuvenate interest in what the company originally was known for: stunning "high" jewelry of the sort that once caused Indian maharajahs to appear in the company's Paris atelier, carrying bags of gemstones for Cartier to set.

These days, Cartier is better known for its heavily advertised, mass-produced "Love" bracelets and watches -- as well as the accessories that please investors: sunglasses, handbags, pens, lighters. There is even a Baskin-Robbins assortment of fragrances, such as "Délices de Cartier," which is described on the company's Web site as smelling like "iced-up Morello cherry."

These products enlarged Cartier, a unit of Compagnie Financière Richemont SA. But while they haven't exactly tarnished the jeweler's image, they've certainly scratched it a bit. This is precisely the paradox of the luxury industry today. The world isn't creating maharajah-size spenders fast enough to meet Wall Street growth targets, so companies do what Tiffany recently announced and what made Coach a juggernaut a couple of years ago: They open stores in malls and fill them with products trading on the brand's panache.

Anxious about losing its luster, however, Cartier is aggressively stalking the superwealthy in their own natural habitat. Cartier's U.S. chief executive, Frédéric de Narp, last year recruited art adviser Carl Adams from Christie's auction house, where Mr. Adams had assembled an enviable Rolodex. As Cartier's vice president of business development, Mr. Adams organizes 18th-century-style salons that give Cartier access to the nation's leading socialites in their own homes. "We want these influential women to understand the heritage of the brand," Mr. de Narp says.
The luxury house doesn't sell anything at the events. Rather, it aims to build relationships with future customers so that when someone wants to buy a $150,000 bracelet, she thinks of Cartier first.

"I never thought I'd look good in a big rock like this," mused Kathi Koll, wife of real-estate developer Donald Koll, as she tried on the 25-carat "D internally flawless," emerald-cut diamond ring.

Three women, including art patron Susan Gersh, hatched a playful plan to invest jointly in a Panthére de Cartier bracelet set with 1,310 diamonds and 133 sapphires. Prices, however, were not discussed.

By the time the iced mango pudding arrived, Joni Smith -- a fixture on the Los Angeles Philharmonic annual gala committee -- had loosened buttons on her frothy, high-necked dress to try on an elaborate necklace of diamonds, amethysts, sapphires and other gems. She pulled a tiny mirror from her purse.

Mr. Adams fetched a bigger mirror. "We should pass them around, yes. I think that's a great idea," he said belatedly.

Mrs. Smith joked that a bauble might fall into her handbag. "My purse keeps falling open."

After coffee and candied cashews, the group retired to the screening room for Mr. Adams and Mr. Bolton's PowerPoint presentation on fauvism, the Ballet Russes and how wild-animal art influenced fashion and Cartier. A photo of dancer Vaslav Nijinsky in spotted tights segued to a shot of Cartier panther watches and a plug for Cartier as an innovator in setting stones in platinum. The famously blond-bobbed Ms. Somers jabbed her neighbor to point out photos of Cartier patrons and influences whose clothes intrigued her: a snazzy bejeweled dress, a pair of sparkly cowboy boots.

Mr. Adams gossiped about Cartier clients of old. "What was great about the Duke and Duchess of Windsor was that they were extraordinary customers of ours," he said with a grin. Mr. Bolton entertained the salon with tales of scouring eBay to bolster the Met's collections.

There were no questions as the lecture concluded. Mr. Adams appeared thoughtful as a white-gloved handler packed away jewels.

He was already planning his next salon. "I've got to figure out how to get people to loosen up," Mr. Adams said, "and get the conversation going."
•••

thanks for sharing the article -- its really interesting to see Cartier trying to maintain its renvenue numbers while trying to retain its exclusive appeal. As the article hinted, this was something that I understand was/is also an area of difficulty for Tiffany.
•••