With This Ring I Thee WAG


The Wedding WAG-athon sees England captain John Terry tie the knot on Friday, followed on Saturday by team-mates Steven Gerrard, Gary Neville and Michael Carrick.
Not surprisingly, their respective brides have gone to extremes to ensure that their ceremony grabs the headlines in glossy magazines. Forget understated classiness and tradition, national stocks of St Tropez bronzer and Louboutin stilettos have been depleted as those considered worthy of an invitation prepare for this flashy three-day blow-out. But if youre not one of the lucky few on the guest lists, dont despair. Here, ALISON BOSHOFF presents the Mails very own guide to the biggest, tackiest, splashiest weekend in the history of footballs glitterati. . .

The match
With her tangerine tan and shopping passion, former nail technician Alex Curran will make the ultimate footballers wife. Determined not to be outdone, she has ensured her three-day-long celebration will be the showiest wedding. Alex and Liverpool skipper Gerrard met at a nightclub, but she rebuffed the £120,000-a-week star three times before they went on a date. She is the mother of his two children, Lilly-Ella, three, and Lexie, one. They live in a mansion in Formby, and he has recently bought a new £3.5 million home in Lathom, Lancashire.
Kick-off
The extravaganza begins on Friday at Cliveden House, Berkshire. The ceremony is in the Great Hall on Saturday at 1.40pm. The party is expected to go on until 3.30am, with bacon butties and chips available. The wedding cake is believed to have seven tiers and be as tall as the groom.
Team strip
Alex has been to Paris for fittings for a couture Dior number. Lilly-Ella and Lexie will be in miniature versions. Stevie is said to be considering a white suit. Alex has been having microdermabrasion facials and tanning treatments. Shell also be unveiling a "more sophisticated" hairstyle.
Guests
England striker Michael Owen and wife Louise, Gerrards Liverpool teammates-Jamie Carragher and wife Nicola, Robbie Fowler and wife Kerry, Harry Kewell and girlfriend Sheree Murphy; plus Chelsea star Ashley Cole and popstar wife Cheryl. Wayne and Coleen will be at the party. Spurs midfielder Danny Murphy is best man.
Entertainment
Take That star Gary Barlow was reputedly singing, but his manager told us he isnt. A "famous DJ" is promised.
Budget
£1 million.
Extra time
The Jumeirah Beach Hotel in Dubai. Read all about it
OK! Magazine - are paying around £800,000
••• 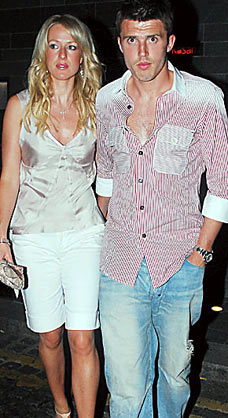 The match
They may not be as glitzy or well known as the other couples but Manchester United midfielder Carrick is one of the most expensive players in the Premiership and Lisa can be a real live wire when shes had a drink - witness her kissing Joe Coles fiancee Carly Zucker on the lips after a 4am bender in Baden-Baden during last years World Cup in Germany. Lisa is a university-educated Pilates instructor who started dating Carrick ten years ago when they were at school in Wallsend, Tyne and Wear. Both are now 25. Carrick has just bought a £4million mansion in Mottram St Andrew, Cheshire.
Kick-off
Saturday afternoon reputedly at a church in Wymondham, near Melton Mowbray in Leicestershire, where Lisas parents live.
The reception will be at nearby stately home Stapleford Hall.
Team-strip
Lisa's dress is rumoured to be by Christian Lacroix.
Guests
Those expected include Liverpool striker Peter Crouch and his girlfriend Abbey Clancy, Chelsea and England player Joe Cole and his partner Carly Zucker, Spurs striker Jermain Defoe and girlfriend Charlotte Mears, who was on the TV programme WAGs Boutique.
Entertainment
No idea, but guests are praying theres no karaoke machine. They are still haunted by memories of Lisas performance of Dancing Queen last year after a few too many bellinis.
Budget
A mere £250,000.
Red card
England boss Steve McClaren. Carrick is still stung by the fact that the meanie manager didnt pick him for the Estonia game on Wednesday. Read all about it
There is an offer on the table from Hello! magazine of £200,000, and it looks as if they are going to take it.
•••


The match
Quintessential childhood sweethearts, from Barking and Dagenham respectively, they have been together for nine years. The 24-year-old former beautician is a pretty blonde-next-door who, unlike other WAGs and her 26-year-old hubby-to-be, has an apparent aversion to nightclubs and prefers to stay at the couples £3million mansion in Oxshott, Surrey, with their one-year-old twins, Georgie John and Summer Rose.
John gave Toni an £80,000 Franck Muller watch to celebrate their childrens birth. So it must be love!
Kick-off
Starts at 4pm at Blenheim Palace, Oxfordshire, built for the first Duke of Marlborough in 1705, and set in a 2,100-acre estate. Sly Stallone got married here in 1997. Eton-educated international party planner Peregrine Armstrong-Jones, a younger half-brother of the Earl of Snowdon, is in charge of the event. His previous bashes include Posh and Becks nuptials, and Liz Hurleys.
He also organised Russian billionaire Andrei Melnichenkos wedding, complete with a performance by Whitney Houston and phalanxes of heavily built men in grey suits with earpieces, so he knows all about creating the perfect romantic atmosphere.
The cream mock-croc invitations are particularly tasteful. Huge security is expected for the star guest, Chelsea owner Roman Abramovich and his Russian entourage.
Team strip
Toni has spurned the WAGs favourite wedding designer Vera Wang, but sources say that she has plumped for a couture gown by Givenchy, with a tight silhouette and spectacular ruffles on the shoulders. Terry will be wearing a white suit by Tom Cruises tailor, Richard James.
Guests
Not the Beckhams. Sadly, David has training ahead of a crucial Real Madrid game, but who cares when Roman Abramovich is going to be there. The question on everyones lips is whether the recently-divorced billionaire will bring his beautiful young girlfriend, Russian socialite Daria Zhukova.
Wayne and Coleen will arrive by helicopter.
Also attending will be a slew of Terrys Chelsea team-mates: Wayne and Vanessa Bridge, Frank Lampard and Elen Rives, Joe Cole and Carly Zucker.
Jose Mourinho and Peter Kenyon will also be there with their partners.
Entertainment
Although Lionel Richie was approached, its understood that Atomic Kitten will serenade the happy couple and their celebrity entourage into the early hours.
Budget
In excess of £1 million for 250 guests. This includes flowers from Rob Van Helden, who did the blooms at the Beckhams Full Length And Fabulous party last year and an enormous marquee for dancing.
Red card
JTS allegedly chequered past. He has always refuted claims of infidelity, but a string of women have maintained otherwise - eight in the past seven years.
Among the more notable are Lianne Johnson, who said they "romped" in a cubicle in Browns nightclub while she was on crutches, and Shalimar Wimble who said they had a liaison in fellow Chelsea star Wayne Bridges Surrey mansion. Terry excused his poor performance, saying he was exhausted after training and had only eaten two Jaffa Cakes.
Lets hope he tucks into the wedding buffet.
Extra time
Instead of a honeymoon, the groom is going on a belated stag trip with his friends to Las Vegas. Who said romance was dead! Read all about it
OK! Magazine is thought to be paying £750,000 for the privilege of covering this glitzy do. Its probably spare change to Terry, who earns £90,000 a week.
••• 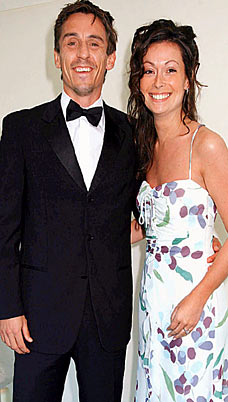 
The match
"Mr Boring" who earns £80,000 a week as Manchester Uniteds captain and his pretty brunette girlfriend Emma, 24, a one-time shopgirl who is now a "holistic therapy student".
They met in 2004. She favours deep tans and long hair - think Nancy DellOlio 30 years ago. The couple got engaged on holiday in Gozo near Malta, where Neville, 32, has a home - he gave her a £170,000 four-carat diamond ring. Yet Emma is "not blingy at all", say friends.
The couple are said to want a "regal, restrained atmosphere".
Kick-off
Saturday afternoon in the surprisingly un-Waggish Manchester Cathedral - its interior is adorned with minstrel angels and wooden carvings.
Afterwards guests will go to the couples estate at Bradshaw in Bolton, Greater Manchester, which has a 12-bedroom house, golf course and cinema. Up to 200 builders have been working day and night to get it ready; a giant marquee will be erected in the grounds.
Emma asked Gordon Ramsay to do the catering but he was too busy. Instead, the menu will include sausage-and-mash canapes.
Team strip
A bridal gown from exclusive London boutique Browns near Bond Street.
The theme is said to be red, white and black (the Man Utd colours). Guests are expected to keep to this.
Guests
Sol Campbell, Rio Ferdinand. Brother Phil will be the best man. David Beckham had hoped to take this role (Gary was his best man) but he has a vital match on Sunday. Victoria, though, is expected to be there.
Wayne and Coleen are understood to be attending the ceremony, before flying off in their helicopter to Cliveden for Stevie and Alexs do. Wayne is particularly close to Gary, but Coleen and Alex are best friends. Lifes so busy for Wayne and Coleen!
Entertainment
Tenor Jon Christos will sing in the cathedral, and little Ray Quinn from The X Factor is thought to be lined up for the reception - Gary loves swing and Motown.
Budget
A relatively modest £500,000.
Red card
Gary offered James Blunt a cool £100,000 to sing Youre Beautiful to his bride, but Blunt said he was busy recording and touring.
Extra time
Malta. Read all about it
Sources at Hello! and OK! indicate Neville was offered the most money out of all the couples but has opted to keep his big day relatively private instead.
•••

wow, thanks for posting Prada Emma Hadfield looks quite old for 24...
•••

Hey Prada, Thanks so much for this post, I love how you post news from your old home!
I read this in my daily newspaper this morning, lol!
I'm mostly looking forward to Steven & Alex's wedding!
xxxRosexxx
•••

Wow, it's neat that two of the couples have been together since their teenage years. Also, that Gary Neville looks WAY older than 32.
•••

rainbow_rose said:
Hey Prada, Thanks so much for this post, I love how you post news from your old home!
I read this in my daily newspaper this morning, lol!
I'm mostly looking forward to Steven & Alex's wedding!
xxxRosexxx
Click to expand...

I'm looking forward to the John and Toni pics and news.
•••

I'm looking forward to the John and Toni pics and news.
Click to expand...


Yes i'm sure there's will be extremely extravagant! And they are definitly sure to have the best guests - Roman Abramovich!

This thread is hilarious. If I was a WAG I would counter all of this overspending and a tiny tiny wedding. Wouldn't it be ironic if THAT story trumped all of these ridiculousness?

Fugs need loving too. Better they get together than spread it elsewhere.
•••