Wine Country Thanksgiving with some surprises!

DH and I went to Napa for Thanksgiving (yea, no cooking for me!). We stayed in Yountville at the Villagio Inn and Spa. The drive up there was awesome, it was so beautiful! Anyhow, I was reading on tPF that Reese & Jake were spotted up there so I wondered to myself if I would see anyone.

On Thanksgiving day, DH and I went to Hurley's for a quick lunch, because, well, there was nowhere else open for lunch! LOL! We had to sit in the chairs around the perimeter of the place because they were totally booked and couldn't seat us. We didn't care, we were just hungry. So we plopped down in two chairs next to the hostess stand. Unbelievably, who walks in but an "unknown female" and Lance Armstrong. I saw him and he looked at me and smiled, kind of the "I know you know who I am smile" and I smiled back. But he was just there wanting to get food there, so I didn't want to bother him.

At dinner, DH and I had reservations at Domaine Chandon's Etoile. We were sitting down by the front door waiting for our table. It was getting pretty busy, and people were filing in, giving their last name for their tables. Then who walks in with at least a dozen people is none other than Mario Andretti. I kid you not! DH just about fell over in his chair! Again, we didn't feel it was appropriate to bother him when he was with his family on Thanksgiving, so we left him alone.

The day after Thanksgiving was much less exciting, we had lunch at Bistro Jeanty before leaving Napa.

DH had a delicious salad with escarole, soft boiled egg, and an apple bacon dressing: 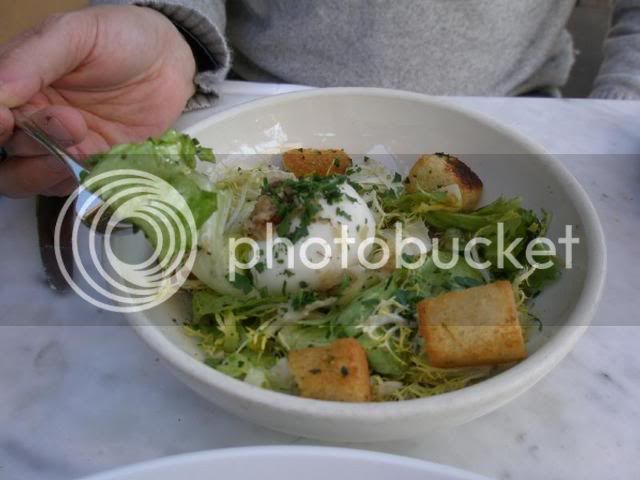 I had a delicious filet in a mushroom cream sauce with green beans: 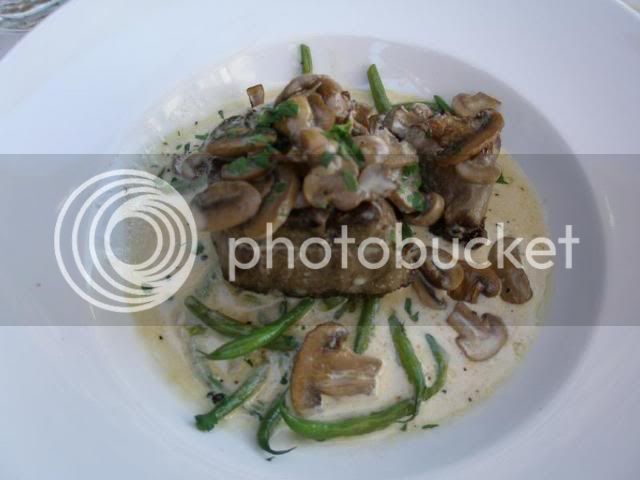 Well, that was my exciting Thanksgiving! Thanks for letting me share!

Awww, sweetie, you should have come a little further north to Mendocino County and taken a wine tour. The Hopland Inn has the best fine dining in the whole area, and you'd love the uncrowded, casual feeling. Not to mention the neat little shops in the area.

I'm glad you had a great time in Napa!

Oh, you lucky Lady...just one of our favorite places on earth!

We stay at the Vintage Inn in Yountville, but I will have to check out the Villagio next time (mix it up a bit)!

Thanks for posting the pics of your meal, yummy!

I thought I'm the only one who takes pics of stuff like that, hehe.

Did you recognize the woman with Lance Armstrong? It wasn't one of the Olsen twins was it (I can't remember which one he was supposedly hanging out with)?!

balihai88 said:
Did you recognize the woman with Lance Armstrong? It wasn't one of the Olsen twins was it (I can't remember which one he was supposedly hanging out with)?!
Click to expand...

The woman who was with Lance was definitely NOT one of the Olsen twins. She was tall with short dark hair. I have never seen her in pictures before -- maybe she's a friend or relative. They were not romantically involved, they were just hanging out.
You must log in or register to reply here.
Share:
Reddit Pinterest Tumblr WhatsApp Email Link
Register on TPF! This sidebar then disappears and there are less ads!
Sign Up
Top Bottom