Will Smith:My Daughter Wants to be Paris Hilton

Will Smith: My Daughter Wants to Be Paris Hilton 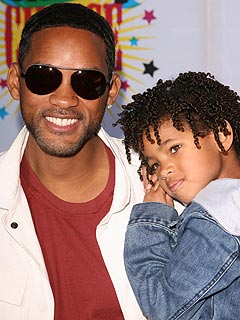 Will Smith has already made a star out of one of his children &#8211; son Jaden, 9, who costarred in 2006's The Pursuit of Happyness. Now, the acting bug has bitten again in the family.

Smith's daughter Willow, 7, makes her onscreen debut in his sci-fi thriller I Am Legend, due in theaters Dec. 14.

"She has a drive," Smith tells PEOPLE. "She has an energy and she just connects to human emotion. I think a big part was probably [seeing] Jaden after The Pursuit of Happyness. She saw what Jaden did, and she was like, 'I want that.'"

Still, there shouldn't be too much tension between the young Smiths. Smith says they have different styles &#8211; and goals.

"And Willow is Paris Hilton," Smith says, laughing. "Willow wants to be on TV."

In one grueling outdoor sequence for I Am Legend, temperatures dropped well below zero, Smith says &#8211; but that didn't stop his daughter from finishing her scenes.

"Willow was out there and she has her stuff on and she's cold and she's getting a little irritable. And she looks at me and says, "Daddy, I don't care how low it goes. I'm going to finish.'

Continues Smith: "I was like, 'Wow, that's good baby, because Daddy's leaving if it goes any lower then that 1."

Another reason for the strong sense of professionalism: Will and Jada Smith make their children audition for their films. But when they told Willow she nabbed the role in I Am Legend, Smith says she turned to her brother, already a screen veteran, stuck out her tongue and teasingly taunted him.

They have an adorable family. I'm sure he wouldn't let her become a real "Paris Hilton" rather than just the wanting to be on TV part... or at least I hope so.
•••

haha thats funny. Its so true! Paris does just want to be on TV!! Lets just hope little Willow has some sort of talent! I imagine she does, after seeing Jaden in The Pursuit of Happyness, hes an amazing little actor.
•••

I thinks he means she just wants to be famous, the center of attention. Not that she wants to drive drunk, or flash her privates.
•••

wordpast said:
I thinks he means she just wants to be famous, the center of attention. Not that she wants to drive drunk, or flash her privates.
Click to expand...

^^ I agree. The other difference being, of course, is that Willow will have a good upbringing, which means she will actually have a conscience and a soul.
•••
C

Phew I literally thought when I read the tile that Will's daughet wanted to be like Paris- but if she wants to be famous like that I suppose thats OK. Who am I to judge anyway
•••

I didn't take it literally

I love Will and Jada- and his son was great in POH and I am looking forward to seeing his daughter in this movie!
•••

wordpast said:
I thinks he means she just wants to be famous, the center of attention. Not that she wants to drive drunk, or flash her privates.
Click to expand...

We better like this family cuz there going to be around for ages, LOL. My neighber took my 2 year old for a walk not so long ago and Will stoped to tell my little one how beautiful she was. Wish I was there, I would have asked him to cast her, just kidding, not pimping my girl out, but I would have like to meet him, he seems so charasmatic. We did see Marcia Cross and her little so cute baby the other day!
•••

keodi said:
oh okay when I first saw the title to the thread I was like


haha me too!! I was thinking 'woahh no way would Will let his daughter be like Paris!'.

Yeah...the title had me worried. Will and Jada seem to be great parents, and that is NOT something to have as a goal for your little girl.
•••
You must log in or register to reply here.
Share:
Reddit Pinterest WhatsApp Email Share
Register on TPF! This sidebar then disappears and there are less ads!
Sign Up
Top