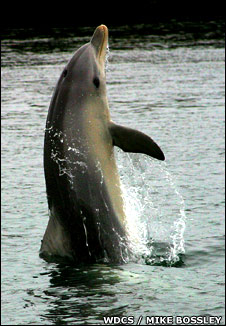 The tail-walking dolphins were spotted at the coast near Adelaide

A wild dolphin is apparently teaching other members of her group to walk on their tails, a behaviour usually seen only after training in captivity.
The tail-walking group lives along the south Australian coast near Adelaide.
One of them spent a short time after illness in a dolphinarium 20 years ago and may have picked up the trick there.
Scientists studying the group say tail-walk tuition has not been seen before, and suggest the habit may emerge as a form of "culture" among this group.
"We can't for the life of us work out why they do it," said Mike Bossley from the Whale and Dolphin Conservation Society (WDCS), one of the scientists who have been monitoring the group on the Port River estuary.
"We're doing systematic observations now to determine if there's something that may trigger it, but so far we haven't found anything," he told BBC News.
Rich culture
In the 1980s, Billie, one of the females in the group, spent a few weeks in a local dolphinarium recovering from malnutrition and sickness, a consequence of having been trapped in a marina lock.

She received no training there, but may have seen others tail-walking.
Now, other females in the group have picked up the habit. It is seen rarely in the wild, and the obvious inference is that they have learned it from Billie.
"This indicates that they do learn from each other, which is not a surprise really, but it does also seem that they exhibit elements of what in humans we would call 'cultural' behaviour," said Dr Bossley.
"These are things that groups develop and are passed between individuals and that come to define those groups, such as language or dancing; and it would seem that among the Port River dolphins we may have an incipient tail-walking culture."
The "cultural" transmission of ideas and skills has been documented in apes, while dolphins off the coast of Western Australia are known to teach their young to use sponges as an aid when gathering food.

dolphins are my favorite animals...they are just such beautiful creatures!