One of the best cheesiest movies out there...

Who's the master? Sho' Nuff! 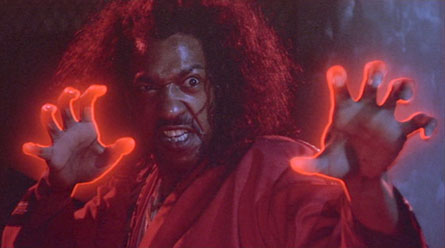 NOOO!!! Julius J.Carry III, who played Sho'nuff in "The Last Dragon," has passed away at the age of 56. Julius died of complications from pancreatic cancer on Tuesday in his Studio City, CA home.
Julius has nearly 60 TV and film credits to his name, but his role as The Shogun of Harlem is what he became most famous for.
He is survived by his wife, mother and brother.
Rest in peace, Julius. You'll always be the baddest mofo low down around this town!

SO and I watched that movie(for like the millionth time) just a few months ago!

I haven't seen it in a while. I used to love me some Bruce LeRoy---remember he was in Janet Jackson's video, Let's wait a while.

Awwww ... I just watched an episode of Spin City that he was on. I loved that movie, too. Sho Nuff was one bad mofo! I'm with you, Ladybug. Bruce LeRoy was the truth and the light back in the day!

I looooove this movie though.