Which Chanel will make a good diaper bag?

Hi! I'm looking for a Chanel big and durable enough for a diaper bag. With my first born I used the Chanel travel line bag and it held up pretty good. The only thing is I wish there were more pockets! I am leaning toward a caviar bag but canvas or lambskin will do as well. Is there a Chanel that is similar to the LV Totally MM? That would be ideal for me. I just preferred Chanel over LV. Thank you!
P

I'd think the Chanel Cerf Executive tote would make a great diaper bag. I've seen celebs carry their dogs around in it, so I'm sure it would hold plenty of supplies! Both of my SA's have one right now. They must be pretty easy to come by. 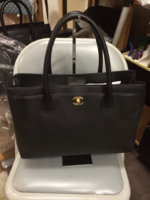 Well, considering what it will be used for I would recommend a seasonal tote. The Grained Calfskin tote is gorgeous but not as pricey as the cerf or other classic totes (i.e gst, pst). It may even still be available in stores.

Or maybe even a pre-owned Biarritz? (second photo)

I'll go ahead and say never! The spirit of Chanel isn't to be practical

Swanky Mama Of Three said:
I'll go ahead and say never! The spirit of Chanel isn't to be practical

Yeah I would agree. It's hard to find a "practical" Chanel. The Biarritz and Seasonal totes come close but they will never be as practical as a Neverfull, St.Louis or Longchamp Pliage.

I would think that the GST would be a great diaper bag and the price is still 'good' for Chanel.

Biarritz for me.
T

i vote for the seasonal tote (first pic) that you posted. it looks very similar to the neverfull


LuxBagLVr said:
Well, considering what it will be used for I would recommend a seasonal tote. The Grained Calfskin tote is gorgeous but not as pricey as the cerf or other classic totes (i.e gst, pst). It may even still be available in stores.

Or maybe even a pre-owned Biarritz? (second photo)
Click to expand...

My vote goes to the first pic by LuxBagLvr. It's the grand shopping tote. There is a gold version that looks similar but without zipped top that is currently in store at NM.


LuxBagLVr said:
Well, considering what it will be used for I would recommend a seasonal tote. The Grained Calfskin tote is gorgeous but not as pricey as the cerf or other classic totes (i.e gst, pst). It may even still be available in stores.

Or maybe even a pre-owned Biarritz? (second photo)
Click to expand...

I could not see any Chanel as a diaper bag - I save too hard for them & could not use them in that way - but I think a Louis Vuitton Neverfull would be great and less worry free?

Imo none work! I once considered a GST for DS and my friend showed me how it didnt fit through the gap under the stroller cot to get placed in the basket. (She had an icandy and so did I)
You could potentially damage the shape if you force it to fit. And then it will be lying on its side so nothing will stay where you put it as it is an open bag.

This is ofcourse unless you plan on carrying your nappy bag as opposed to putting it in the stoller basket.. which when you have your hands full.. doesnt happen that much!

It also depends on what you mean by nappy bag. If you are just popping out for a hour or two one nappy, travel wipes will do. But if you need the full, all-day nappy bag (nappies, wipes, bottles, change of clothes, changing mat, toys, muslins..) it needs to be something you can throw on the changing room floor and i would never do that in a toilet with a chanel even a beach bag! It needs to be something that can get dirty with leaky milk. Tommee Tippee bottles leak despite being good. You dont want a milky chanel!!

Definitely the cerf/executive tote (the first pic)
It has a removable zipped large pouch and lots of space.
It also has an extra shoulder strap so you can carry it crossbody.
The bag reminded me of a diaper bag/bags that come with your stroller.
I made a mental note that I would use it for that purpose when the time came!

Everything IS bigger in TX!

I didn't use a chanel as diaper bag, but I have tried many different non diaper bags for diaper bags and came to realization that nothing replaces a true diaper bag!!!
J

I think it would be hard to use a Chanel as a diaper bag as well. As others have mentioned, they're not really meant for it and I'd have a heart attack if it got misshapen or stained.

That said, I did try to use an LV Neverfull as a diaper bag myself. I had an MM size and it was ok, used it with a purse organizer inside (Purse to go) so just in case something did leak, at least there would be some barrier between the spill and my purse lining. However, I did end up just getting a regular diaper bag to use because I realized that when I had the bag loaded up, I really didn't want to carry it anyways because it's too heavy so it would sit underneath the stroller. And if you're not even carrying the bag, then who cares what it is?

Currently I just use the big diaper bag when we're going to be out all day, and I carry my own smaller purse. If we have the stroller, then the daiper bag goes on the stroller, and I carry my bag. If we're just running out for a quick errand or dinner, then I just stick a diaper, wipes, and couple essentials inside my small purse and don't bring a diaper bag. I usually use my LV Favorite MM when I'm out with the little one because it's cross-body, light, and hands free but still large enough for my stuff and a few baby essentials. I also have a neverull GM now, which I like better but again, if you're going to be holding the baby and carrying a big bag, it gets really heavy.

I wouldn't use a Chanel when I have the baby with me because sometimes she'll kick the bag while I'm holding her. It's fine for my LVs, they can take it, but I wouldn't want my Chanel getting kicked or stepped on.