Hi lovelies I’m new here and I need some help.

I found this preloved Chanel that I’m seriously considering buying. However, one of the photo shows some yellow mark at the lower edge of the flap - looks like dried up glue? The bag is from 2003-2004, so is this normal or is it a quality issue? Also it has no authenticity card, only comes with dust bag. But it has a zeko authenticity email cert.

How much does it discount the value? It’s a medium size classic flap. What would be a reasonable price for this kind of condition (assuming the “glue leak” is the main problem)?

Thanks in advance for all the help!! 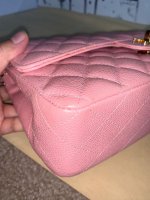 Hi there, I would say that it looks like glue. I have seen similar with other brand bags (ie Gucci) around the seams. Honestly, this would be one I would steer clear of, as glue is not something you can remove and I think it would get worse with time. Based upon what I have noticed in the pre-loved market, I would place this one at around $2500 given the defect and lack of card. Hope this helps.
W

I would avoid this bag because of the glue issue, no matter how cheap. Especially if you aren’t 100% sure about the authenticity.
Reactions: sparklywacky and AEGIS

I would agree with the other two. I don't think I'd be able to look past the glue, especially without an authenticity card.
M

Thanks for the response!! Unfortunately by now I have already bought it, for less than 4k. However it is the much coveted series 8/9 pink color which I've been lusting over for a long time, and I just don't think I'll be lucky enough to catch one priced at $2500 with decent condition! (also, wouldn't price THAT low be a red flag itself?) I saw zeko authentication highly recommended by many Chanel lovers so I chose to believe it. I feel like as long as the bag is authentic, the card shouldn't make too much difference to its value because afterall it's just a card, and we're paying for the bag; also a card could be easily faked if people really wanna scam, right? Though I guess I could get it authenticated by another as well (any recommendation?)
Anyway I got the bag and I'll say it doesn't look bad at all irl and it is just such a gorgeous pink bag! It truly makes my heart sing everytime I look at it! I can upload some pics later if anyone's interested. (:
W

It is a pretty pink! Now that you bought it, are you considering sending it to leather surgeons to fix the glue issue? They will also authenticate before they repair.

****************** is another authentication service I have seen many YouTubers recommend. I will be using them this week, it’s around 10 to 20usd.
You must log in or register to reply here.
Share:
Reddit Pinterest Tumblr WhatsApp Email Link
Register on TPF! This sidebar then disappears and there are less ads!
Sign Up
Top Bottom