vernis Spring street - out of date?

Do you think it is? I'm contemplating finding one and just freshing up the vachetta (as long as the vernis doesn't have scuff marks - i'm okay!) but I wonder if anyone would actually still carry it?
What colors did it come from? And does anyone have modeling pics?

The dilemma is, it's a vernis bag... vernis isn't out dated so why should it be? I have to admit, some of the shades are a bit dated, but there are some magnificent colors, right? I like the gris. Not a fan of the light yellow and still undecided on light pink - but if one comes along at a great price i will snatch it! I do think that they'd be cute in the summer with a little white dress and nude flats... how about you?
I'm starting to like this 'lunchbox'-ish bag.

edit: if i find one on ebay or bonanzle, with the vachetta in poor condition, will LV replace the vachetta for me for $$?
ill make sure to get it authenticated!

Yes! Pomme would be great. pomme isnt really out of date and I figure with the money I save buying pre-loved I could get a matching koala wallet... they match perfectly!

pomme is a good idea, and the koala wallet is my favorite wallet

I don't think the Spring Street is out of date. Adorable!! I believe LV will replace the handle. The colors I remember are the old pastel colors, not the correct names but yellow, light pink (marshmellow), baby blue, light silver and I believe the bold colors were the Fuschia and Rouge (no Pomme). GL finding one!

do you guys reckon i just get the 'rouge' or 'gris' and replace the vachetta handle, OR should i get a SS graffiti 2001 pochette in the 'peach' colour and replace the strap with a cross-body strap? the price for the rouge Spring street it $400, the gris is $380, and the pochette is an amazing deal at $300... i usually see them in the 400s.

Do you have a picture? Is it an eBay auction? Go for the Spring Street. I'm biased because I love Vernis, plus most of the auctions of the Spring Street are of the pastel colors. Sometimes you'll see the Rouge & Gris, then again I'm not watching for Spring Street auctions (or graffiti auctions). How easy is it to find a SS '01 graffiti item? What do YOU really want now and what have you been craving for since these items were discontinued?

The Spring Street is a beautiful bag. I had it in pink but sold it several years ago and regret it..:cry: to me personally, I don't really think any LV bag is out of date...I love seeing people with the discontinued bags because there are so many of them out there that people have never seen before and would be interested to know what year their from. I'm still craving the Graffiti Alma MM in White/Black from the S/S 01 collection!

Bagologist said:
The Spring Street is a beautiful bag. I had it in pink but sold it several years ago and regret it..:cry: to me personally, I don't really think any LV bag is out of date...I love seeing people with the discontinued bags because there are so many of them out there that people have never seen before and would be interested to know what year their from. I'm still craving the Graffiti Alma MM in White/Black from the S/S 01 collection!

Agree! There was a recent picture of Victoria Beckham with a black dress on and she's carrying the Beige Bleecker (sp?) with nude shoes. Looked REAL nice and I instantly thought of the Spring Street. Here it is:
http://forum.purseblog.com/louis-vuitton/celebrities-and-their-lvs-pics-only-344348-104.html

I kicked myself for not getting that hardcase Vernis 'bag' and finally found a beautiful one on eBay.
Last edited: Mar 24, 2010
C

Oh my god! I love that beige bleecker? Did they do the spring street in beige... i decided that i will be on watch for a spring street.

I have one in Silver and I love it to death. I think this is one of the best classic Vernis bag LV ever made. I am sure LV can replace the handle for you for a fee. I would pick this bag over the Graffiti Pochette.

MatAllston, you're looking great with this 'little Lady'.

I can show you 4 colors, basicandorganic. 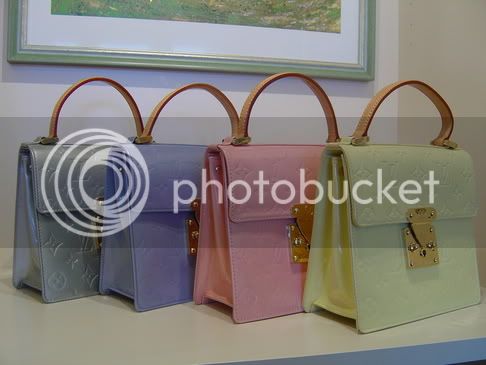 sorry i think its out dated forsure! its kinda grandma-ish!
You must log in or register to reply here.
Share:
Reddit Pinterest Tumblr WhatsApp Email Link
Register on TPF! This sidebar then disappears and there are less ads!
Sign Up
Top Bottom