Hiya everyone, this is the follow-up to the bvlgari necklace thread

So after I got the bvlgari necklace from my hubby, which was out of the blue, and really took me by surprise (and btw my gal pals love it too!) I wanted to get him something in return and most of the kind gals here suggested I get the dog tag for him out of the 2 tiffany chains I shortlisted. And here it is!

It was the last piece in the store, and there were a few hairline scratches. The SA told me she can polish it off, but after it came back for the polishing, there were significantly MORE scratches, no longer so "hairline"... which she said gave the dog tag more character, and a more rugged look

I didnt want to be too nasty since I engraved a message on it already. I was very tempted to ask her to get me another piece, which her colleague gleefully suggested. Sigh.

I hope my hubby like his Christmas present! And after I opened the box to take photos, I realized I couldn't tie the ribbon back although the SA made the ribbon so effortlessly

I guess I can wear it on-off in the meantime since it is opened anyway. To give it more meaning, since it will be imbued with my essence

Starting to sound like the Tiffany SA... rationalization lol. Thanks again everyone here for helping me make this wonderful choice! 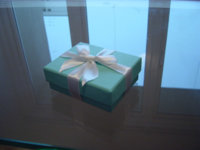 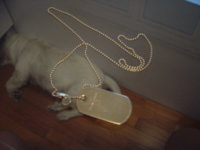 I have the 2 Tiffany dog tag necklaces: one is an oval, the other is a heart...on a really long chain...its so cool bc you there are so many different ways to wear it!

Cool! you're a sweet wife.

I'm SURE he'll LOVE it! And look at it this way--a few nicks means you don't have to obsess about keeping it perfect until he get it! Less stress for you!

...that was my attempt to make it all better!