The Scottish Wildcat Kitten Saving Its Species From Extinction 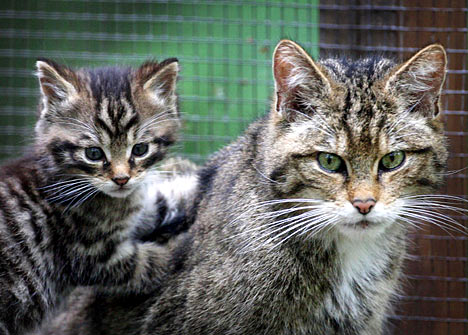 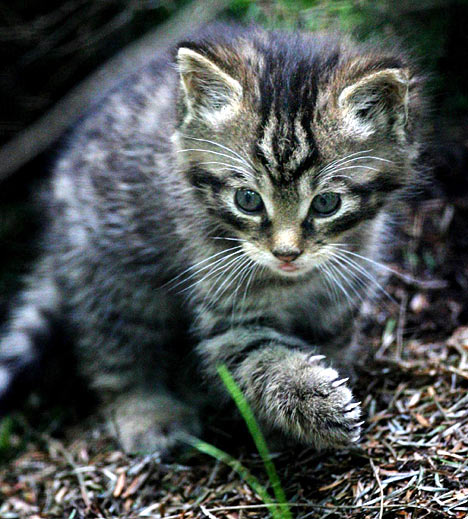 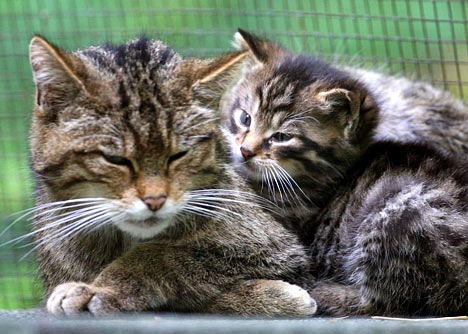 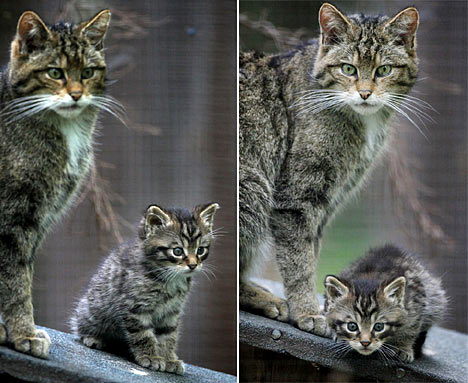 A rare Scottish wildcat kitten carries the hopes of its species on its tiny shoulders.
The unnamed male kitten was born to two pure bred Scottish wildcats, said to be Britain's rarest mammal, at Wildwood Discovery Park, near Canterbury, Kent

Its parents, Hamish and Flora, are among only 400 Scottish wildcats left in the world and scientists warn they could become extinct within our lifetime. Wildcats have been resident in Britain for more than two million years, sharing the land with the mammoth, cave bear and cave lion long before humans found their way through Europe's forests


Peter Smith, chief executive of the Wildwood Trust, said that after centuries of persecution, deforestation and competition from introduced species, the numbers of Scottish wildcats plummetted.
He said: "The kitten's birth will help boost the increasingly important captive population in the UK, which could save the species from future extinction. "The kitten was born earlier this month but it is only now that the proud mother has brought the kitten out to meet the public


Originally a forest dweller, the Scottish wildcat is 50 per cent larger than a domestic cat and preys mainly on rodents and small mammals but also on birds, insects, reptiles and fish. Mr Smith said they live a solitary existence, coming together in pairs to mate for a short period of time in January and February.


He added: "With extinction a possibility as soon as this decade, the next few years will be key in deciding whether the Scottish wildcat will survive.
"All wildcat species are endangered for very similar reasons across Europe, Asia and Africa. However, none are as close to extinction as the Scottish form which is Britain's rarest mammal and one of the rarest cats in the world." The Wildwood Trust is holding a competition to name the kitten, which was born earlier this month.

That little kitten is sooooo cute!!!!!!

Brooklyn New York City where they paint murals of

aww wow that is a gorgeous animal!!

have it! keep it!

awwwww look at its big eyes!

Aww so cute! I wish there was something that we could tell the size of the cats, from the pics they look pretty normal, well maybe the adult looks a little larger than normal, but not too different.
You must log in or register to reply here.
Share:
Reddit Pinterest Tumblr WhatsApp Email Link
Register on TPF! This sidebar then disappears and there are less ads!
Sign Up
Top Bottom