The Mobile Phone That Stops You Being Struck By Lightning

Alarm will sound when blue skies mask the danger of thunderbolts 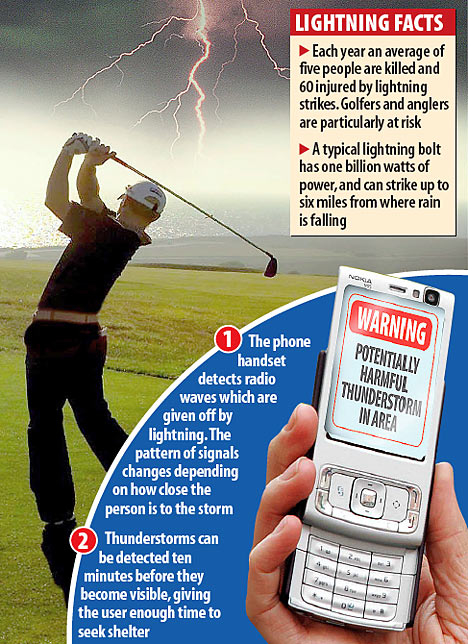 Children have always been taught to work out how near they are to a dangerous electrical storm by counting the seconds between the thunder and the flash of lightning.


Now there is a more modern solution to the summer hazard of lightning strikes - the mobile phone. Phone makers, not content with offering email, camera, video recorder and a host of other options on their high-tech handsets, have developed a phone which can alert the user to the threat of a lightning strike by sounding an alarm telling the person to move to safety.


It is likely to be a boon to outdoor enthusiasts such as golfers and anglers who are most at risk because they often tend to be away from shelter.
In the UK, five people are killed each year after being struck by lightning and dozens more are injured.
The new handset detects radio waves given off by lightning up to hundreds of miles away. The pattern of the waves changes as a storm gets nearer and the alarm sounds.
Nokia says: "Many of the most dangerous lightning strikes occur when no visible clouds are present above as a warning of a thunderstorm.
"Thus, a system that warns of potential harmful thunderstorms, even if only approximately ten minutes before they become visible, can be considered a major safety feature."
Many people are caught because lightning can strike from clear skies as far as six miles from where rain is falling.
A typical bolt has the power of a billion watts - enough to light 10 million lightbulbs.

Between 30 and 60 people a year survive lightning strikes in the UK but more than three-quarters of them suffer a permanent disability, such as brain damage or paralysis.
In 2003, a man was left in a coma for a week and most of the bones in his face were shattered after he was hit by lightning while running around a park in Liverpool.
And in September 1999, two young Thai women were found dead under a tree in Hyde Park, London, after being struck by lightning while sheltering from a storm.
The lightning alarm is the latest in a string of unusual uses for mobile phones. Last week a text message service was announced that will warn sunlovers when they risk getting burnt.
It will receive updates of UV intensity from local phone masts and sound a warning when mobile users who have signed up to the service have spent too long outside in the sun.

A spokesman for the Royal Society for the Prevention of Accidents said: "For people who are out and about playing golf or fishing, if you have an early warning, at least you can be aware before the storm strikes.
"But the important thing is to know what to do if a lightning storm is threatening.
"There is some basic advice: try to find shelter in a brick building or in your car if it is close, because the tyres should provide insulation. "People should not shelter under trees."