The inner turmoil is over - Sold my Hardly used LV for an Everyday Chanel!

I apologize for the long story in advance but I know some of you can relate to this. DH bought me a special anniversary gift while we were away on vacation. We were married on 11/11/00, and on 11/11/11 we were celebrating our 11th anniversary and we stopped in the Aruba LV store. I was going to buy myself an LV Milla wristlet like bag as a souvenir. Of course, you always have to try on your HG bag, which was the LV Brea MM in Amarante. I tried it on and did my little poses in the mirror, when DH said that I could go ahead and buy the bag! I was over the moon.

However, I have only used the bag a handful of times. She was so pretty but I would always worry about ruining her. She was my most expensive bag in my collection, but the least used. Fast forward a few years later, I was on vacation in Barbados. I ran into the same SA that sold me the bag in Aruba years before! We even pulled up my FB page and I showed her I had a picture of the 3 of us when we first bought it. All the other SA's gathered around and they got a kick out of the story.

I even found out that she said back then that she was in training in the Aruba store and that I was her very first sale and her co workers took her out for drinks that night to celebrate! It just made that bag, all the more special as it was my anniversary gift and I just found out it was her first sale.

Back home, I kept trying to use my Brea but it was hard. It was too cumbersome for me for my work commute. Too big for taking out at night. It wasn't functional enough for me and was just a waste to just sit in her dust bag.

I finally asked DH, if it would be ok to sell her and get something I can enjoy more often. (Normally, he doesn't buy my bags as I never want to feel guilty about selling later on). So after years of going back and forth in my head, I finally sold it 2 weeks ago. I knew I had to get something special to replace it and something I would really use. And in her place, I bought this beautiful, pre owned Chanel Ultimate Soft bag! I love it. It's so soft, it's the perfect size and I've already used it. It's in excellent condition! Did I mention I love it! 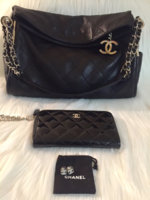 You certainly did the right thing in selling a bag you don't use. Your Chanel is a dream and looks fabulous on you.

LuckyBitch said:
You certainly did the right thing in selling a bag you don't use. Your Chanel is a dream and looks fabulous on you.
Click to expand...

Thanks so much. Definitely have been getting more use out of the Chanel!

that story, it made me think - the special memories you have from the brea are all you need. You don't need to keep the bag to remember how it made you feel and remember that moment in time. It's made me think differently about the bags I've been holding on to for sentimental reasons but never use.
You look great with your new bag, glad it's already making you so happy.
Reactions: Mariapia, Zpursee, Kendie26 and 1 other person

I could give up shopping, but I'm not a quitter.

Thank you for sharing. I enjoy reading your story

How awesome is it that you ran into that SA again? Sometimes we forget that life is not really about things, but the people and the memories we make. Things sometimes link us to those and that is one of the reasons that make them special and take on a life of their own. But sometimes we just want to spend an insane amount of money on a Chanel bag because they're so darn pretty... and that's okay too!

The bag is such a lowkey casual yet gorgeous one. That's the thing about Chanel that gets me everytime. they are timeless classics and for a gal like me who likes to switch things up and have fun with my wardrobe, I wouldn't have in the past thought I am a fan of Chanel which is the classic of the classics. However, they were able to incorporate timeless classics with fun interesting elements - Karl wins everytime.

Congrats on finding such a great bag in excellent condition! Use it lots and may it bring you lots of fun and fond memories meeting great people.

What A Great story! I am a believer in the 1's as far as Angel's. To top it off it was her 1st bag number 1 again! I love your new bag, you will definitely get your use out of it!

Thats a lovely story! Thanks for sharing with us. You did the right thing of getting the bag that you love. I could relate where I usually buy bags myself rather than from DH so that I could sell them later if it doesn't work for me

. Less guilt there. The chanel bag looks lovely on you.

So glad the bag worked out for you!!!!
Reactions: mssmelanie

What a lovely bag! Much better to have your memories and a bag you'll use than one you won't.
Reactions: mssmelanie

Great story - congratulations on your beautiful Chanel bag. I recently sold my LV Prune Epi Electric Brea MM after much deliberation so I can empathize with your difficult choice to let it go. Your replacement looks gorgeous on you!
Reactions: mssmelanie

Thank you so much to all who replied and hit like. I really do appreciate that you can understand where I'm coming from. You gave me some validation that it's ok for me to have sold the bag and I have the memories of the bag and the cool story behind it. Actually, this forum is like a time capsule for me, especially being an OG! I looked for my post about when I got the Brea but couldn't find it but I did find the one where I posted that I ran into the same SA again and I have a picture of us if anyone's interested, it's here. It was also entertaining to see some of the things I posted and then ended up selling. This is such a great place and I love it here!
https://forum.purseblog.com/threads...a-elaine-benes-seinfeld-style-shut-up.844835/
Reactions: Mariapia

Life is short, buy the lambskin!

Just wondering but were you able to get more than half back for the LV?

ooooh... I remember the ultimate soft, such a great bag! Always regretted not buying it back then. Enjoy!
K