That's right, I have a wolf now.

LOL! Meet Lucky. My SO found her when she was three weeks old, half frozen in the snow outside his drag racing shop where he used to build cars in Michigan. She is mostly wolf-- timberwolf I think-- mixed in with maybe some collie. You can see the pointy ears, yellow eyes, stocky body, long brown fur. This is by far the most intelligent ... er, dog?... I have EVER had. I mean, she understands English. She's incredible. She can open doors even. She can open the door to my SO's truck. I'm serious. I'm not even kidding. I've never seen anything like it.

Anyway, when we went to Michigan to visit SO's family, who kept her when he moved here (they loved her, they said) we found that they were chaining this six year old dog to a WASHING MACHINE every night.

:censor: She is an older girl at 6, and just lays around, and we were furious. They refused to stop, saying they "didn't want to trip over her at night" So we brought her home to Arkansas. She and my adopted kitties are already making friends-- I can't believe it. 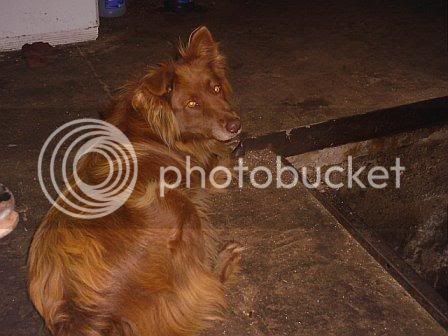 Hi Lucky! Lovely to meet you! Wishing you and the kitties tons of happiness.. and you really look like a sweet sweet girl!

Pat, that's what my vet said! He couldn't believe the combination. She's illegal in Arkansas I think, though, you can't have a dog more than 50% wolf, so getting a city license will be difficult, hopefully they will not have a problem with her, those yellow eyes give away that she is a wolf!

R: it's always heartwarming when people do kind things to hapless animals!!!

Keep us updated on the city license happenings; hope there's no problems with that.

Wow! what a beautiful dog and great story too. congratulations on your new family member!

She is the most beautiful girl! I'm glad she lives with you now.

My sister has a dog that is part-wolf too. Her step-kids got her when they lived in Minnesota. She's says the same thing you do about her temperment. She's loving and sweet and gentle with her other dogs and cats, plus she's the smartest thing on earth!

Congratulations on the new addition to your home!

why yes, it was

Don't ask for trouble - just call her a collie mix for the license. Not all wolves have yellow eyes, and some domestic dogs do. I have even seen yellow eyes on a greyhound. Even if she is part wolf, don't go around advertising it. You don't want Animal Control coming to your house to take her away!
You must log in or register to reply here.
Share:
Reddit Pinterest Tumblr WhatsApp Email Link
Register on TPF! This sidebar then disappears and there are less ads!
Sign Up
Top Bottom