I know, the show has been off the air for a while now, but I catch the reruns and I just bought season 7 on DVD.


I love this show!

Back in the days of Led Zeppelin 8-tracks, TAB colas, and Farrah Fawcett posters, "That '70s Show" continues to flashback to the times where bell bottoms were the hip thing. Set in the Wisconsin suburbs, Eric Forman (Topher Grace) lives under the authority of his parents, Red and Kitty (Kurtwood Smith and Debra Jo Rupp). Next door is his girfriend/neighbor, Donna Pinciotti (Laura Prepon) and her parents Bob and Midge (Don Stark and Tanya Roberts). The rest of the gang includes Jackie (Mila Kunis), and her on again-off again boyfriend, Kelso (Ashton Kutcher), Hyde (Danny Masterson), a conspiracy theorist who believes Xerox will take over the world, and Fez (Wilmer Valderrama), a foreign exchange student who is soaking up American culture like a sponge. The gang mostly likes to spend their time in Eric's basement, pondering their lives, parents, and their futures, but they get into many funny mishaps and adventures in their teenage lives.
(from imdb)


I love watching them in The Circle. I loved watching their fantasy sequences and I loved the music.

Watching my DVDs, I would make note of songs featured in the shows and then add them to my ipod.


I remember seeing the very first episode my freshman year of college, and since then, every chance I got I would watch it.
A very memorable scene in The Pilot: Eric and his friends have just partaken in The Circle when his parents call him up to the kitchen to talk to him. They're talking about giving him the Vista Cruiser, and all Eric can see is the wall moving behind them.

I remember getting teary watching That 70s Show: A Look Back.

I remember watching That 70s Finale in the locker room of my gym.


I love how the entire series has gone by and we still don't know which country Fez is originally from. 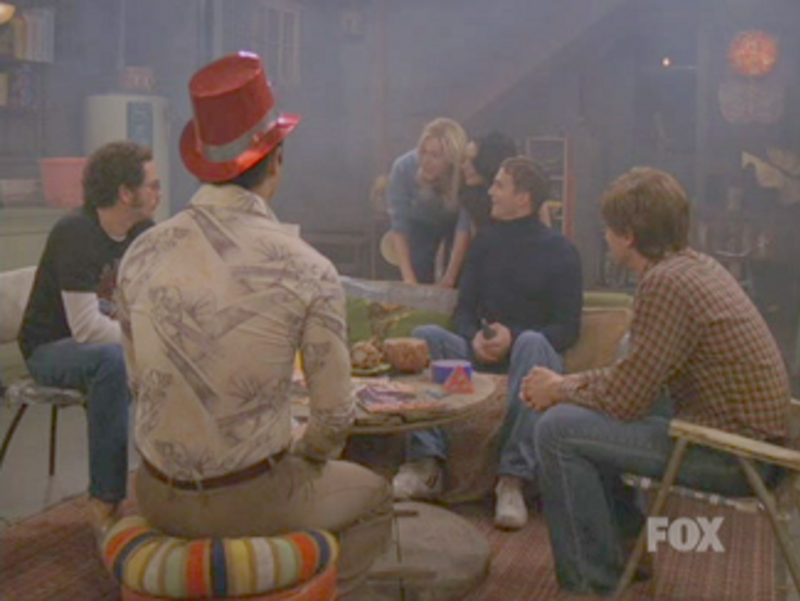 
Kelso: Geez, if Red's like this now, he's going to be a total headcase when they shut down the plant. He's just going to be this pathetic guy...
[Red walks in]
Kelso (loudly): ...with breasts the size of watermelons! ... is what Moses said to the Egyptians.

(Talking about how "whipped" Kelso is, imitating Jackie's voice)
Hyde: Michael, call me at 8:00.
Eric: Michael, do your Chico impression.
Fez: Michael, rub oil on my thighs while I spank you.
(Kelso, Hyde, and Eric all look at Fez, surprised)
Fez: Please, someone else talk now.

Ricky: Tell me, what do you consider your best quality?
Eric: Well, I'm a real people person.
Hyde: I don't answer stupid questions.
Fez: I speak Dutch.
Kelso: My eyes. Oh, and I guess my butt too.

(playing a KISS record backwards)
Mr. Erdman: There it is!... Devil loved me, Devil lives! It's clear as day! (Fez laughs) What's funny?
Fez: In my language, the record just said, 'I want to sex your monkey!'...Which I have never done!

Red: Without rules, we might as well all be up in a tree, flinging our crap at each other.


Kelso (reading from his Career Day report): "Autumn is an important time for the farmer, as he wakes up at dawn to pick carrots fresh from the trees."

Jackie: Well, I have a date too.
Kelso: Who is he? What's his name?
Jackie: His name is... not important. What's important is, he's better than you, in every single conceivable way.
Kelso: Damn, Jackie, that could be anybody!


Kelso: Guys, guess who's taking Pam Macey to the prom?
Hyde: Anyone with a quarter?
Kelso: NO, ME!
Fez: Darn, and I had a quarter, too.


Kelso: Laurie, what's going on? You're acting like you're liking me, and that's weird.
Laurie: It's like I told you Kelso, I'm bored.
Kelso: Well that's very flattering, but uh, you know, Jackie and I are back together.
Laurie: Oh. I understand. Do you wanna see my appendix scar?
Kelso: Once again, (looks at it) what's-her-name and I are back together!


Kelso: Yeah, no parents would be cool. Like The Lord of the Flies.

Ted: Speaking of, has anyone read Equus? I gave a copy to Midge, but, no offense, Sweetie, it may be a little too deep for her.
Midge: Wait a minute, what do you mean, 'no offence'?
Ted: Well, I mean, don't be offended.
Midge: Oh!

(Red comes into the kitchen shouting about how the youth of today is a bunch of degenerates then storms out)
Kitty: Laurie's living with a boy.
Eric: Yes.
Kitty: Just... just one boy, right?
Eric: Yeah, I think so.
Kitty: Well, now, see? It could've been worse.

Laurie: What about Hyde? I mean, he doesn't have to go.
Hyde: While I respect the Judeo-Christian ethic, as well as the eastern philosophies and, of course, the teachings of Mohammed, I find that organized religion has corrupted those beliefs to justify countless atrocities throughout history. Were I to attend church, I'd be a hypocrite.

(Red is putting the garbage out)
Bob: Hey there, Red. Takin' out the trash, I see. Yeah, well... better late than never.
Red: Is that supposed to mean something, Bob?
Bob: Just happened to notice that that low-life Hyde you've been harboring has been busted for possession.
Midge (gasps in shock): My gosh! That stuff was right here in our own neighborhood? (Bob and Red both nod) And to think of all the times we had to drive across town to get it!
Bob: Ix-nay, Midge!

(in the circle)
Donna: So it turns out that my super-sensitive-guy boyfriend wants me to be a baby machine. What a dillhole!
Eric (looking stunned): Donna, I'm sitting right here!
Donna: That's why I said it, you dillhole!


Eric: Golly, Laurie, a baby! And just in time for your black mass!
Red: Eric, what did I tell you about calling your sister the devil?
Eric: It's offensive to the devil?


Laurie: Cosmetology is too hard! I'm quitting.
Kitty: Laurie, don't you think I wanted to quit nursing school a hundred times? The first time I put in a catheter, it broke off.

Kelso: Hey guys, guess what I got?
Hyde: VD?
Kelso: No. A hundred bucks.
Eric: So, money to treat your VD.

Kitty: You know I love my family, but sometimes I just want to get in the car and run them all over.

Eric: So, did you meet Dick Trickle?
Kitty: Eric!
Eric: What?! He's a racecar driver! His name is Dick Trickle! Oh My God! Listen to my voice! I'm so loud!

I love this show! My favorite couple was Hyde and Jackie. I was so sad when they didn't end up together. When I went to Hollywood, I saw Danny Masterson who plays Hyde. I was so excited that I couldn't even say anything.

I liked Hyde and Jackie as a couple, too, but I thought it was great that Fez and Jackie ended up together.

So I'm really, really late to this but I just started watching this show a few weeks ago. I've really gotten into it this week while I'm off work since it comes on every night on The N.

I have a storyline question... How did Hyde end up living with the Formans? Did both of his parents die? Have he and Eric been friends since they were little kids or are they actually related?
Last edited: Mar 13, 2009

luvpurses24 said:
So I'm really, really late to this but I just started watching this show a few weeks ago. I've really gotten into it this week while I'm off work since it comes on every night on The N.

I have a storyline question... How did Hyde end up living with the Formans? Did both of his parents die? Have he and Eric been friends since they were little kids or are they actually related?
Click to expand...

Eric and Hyde were childhood friends. As a teen, Hyde's mother abandoned him and his father was in jail. This all happened at the end of Season 1 and Hyde moved into their basement when it was discovered that Hyde's mother, Edna, had abandoned him. They're not related, but Kitty and Red considered Hyde a son and treated him like he was a part of the family.

^^Awesome! Thanks for answering my question KathyB!

I always loved this show too! Its always on now here in Canada a few times a days so i usually catch it! I love Kitty!

I love this show. I still catch the re-runs every once in awhile.
I love Red, he's my favorite.
You must log in or register to reply here.
Share:
Reddit Pinterest Tumblr WhatsApp Email Link
Register on TPF! This sidebar then disappears and there are less ads!
Sign Up
Top Bottom