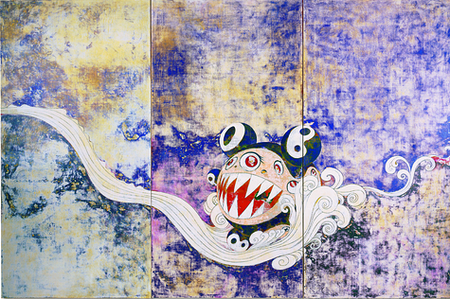 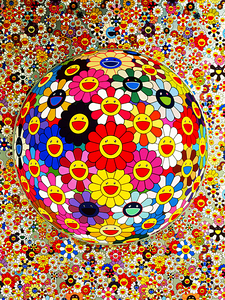 Flower ball (3D)
2002
Acrylic on canvas mounted on board

The smiling chrysanthemum theme also recurs in much of Mr. Murakami's works, as well as on a wide range of Murakami merchandise: key chains, shirts, even soccer balls. Mr. Murakami was trained in classical Japanese painting and his flower motif is seen as a modern take on more traditional works featuring the chrysanthemum, which is the symbol of Japan's imperial family. 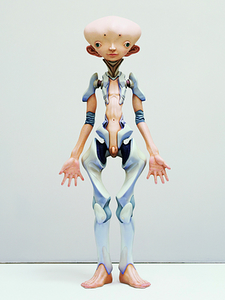 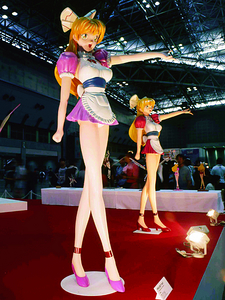 Miss Ko2 is a sculpture inspired by Japan's "otakus", often defined as young men obsessed with animation, comics, or video games. Many of Mr. Murakami's works blur the boundaries of Japanese pop culture with art. 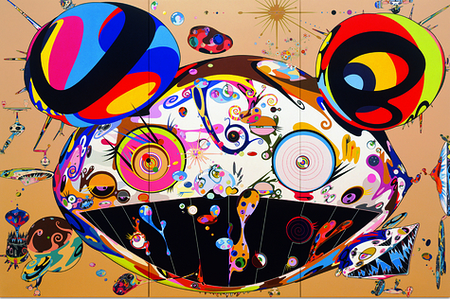 Tan Tan Bo
2001
Acrylic on canvas mounted on board

In this work, DOB has evolved into a gigantic, toothy monster with liquids oozing from his mouth, a fantastical work set against a flat sky that is characteristic of Mr. Murakami's paintings. 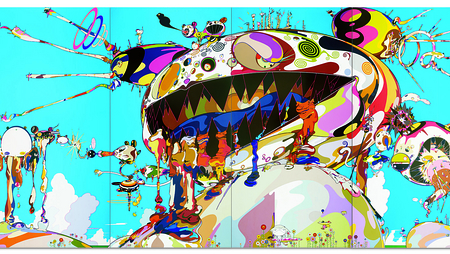 Tan Tan Bo Puking - a.k.a. Gero Tan
2002
Acrylic on canvas mounted on board

In Tan Tan Bo Puking, DOB is transformed into a nightmarish head with gaping black teeth, and seems to represent a figure bloated with gluttony and waste, and on the verge of explosion. The work is seen as a critique of human greed. 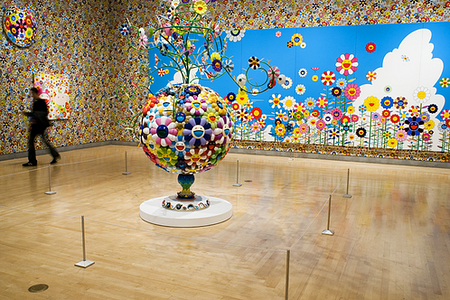 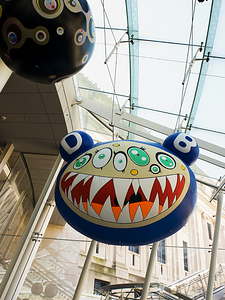 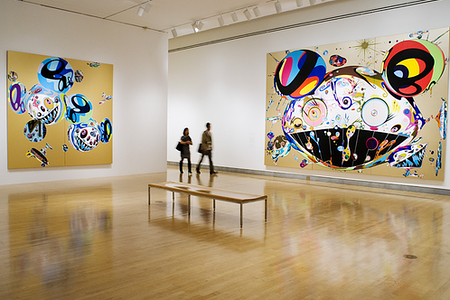 Tan Tan Bo
2001
Acrylic on canvas mounted on board. Pictured at the Brooklyn Museum's exhibit, April 2008. 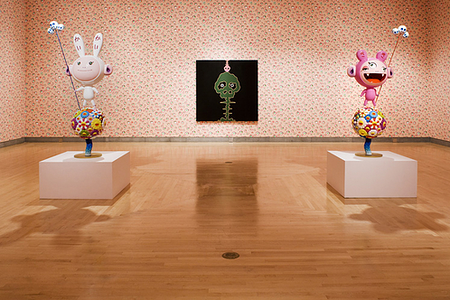 Throughout his decade-long career, Japanese pop artist Takashi Murakami has been known for his fiberglass figurines, smiling flowers and creepy-cute paintings of cuddly characters with fierce-looking teeth.

But it won't be just his busty figurines, like the miniskirt-clad Miss Ko2, raising eyebrows at his exhibit. "© MURAKAMI" features a Louis Vuitton store that will sell handbags printed with the artist's colorful take on LV's hallmark monogram design. A handbag at the store sells for as much as $2,200.

The unusual merchandising effort embodies Mr. Murakami's unabashed appetite for all things commercial. In 2003, he teamed up with Nissan Motor Co. to launch its round, eco-friendly concept car at the Tokyo Motor Show. Later that year, he designed a whole family of mascots that look like aliens for Roppongi Hills, Tokyo's premier office-and-entertainment complex. Last year, he let the Ginza Matsuya department store cover its facade with his Louis Vuitton monogram. He also provided artwork for rapper Kanye West's 2007 album "Graduation."

His blatant commercialism has raised criticism in some quarters, especially in his native Japan. But the artist shrugs off the censure. "I really don't care," Mr. Murakami said by e-mail. "Whether it's art or brands, we're all talking about human desire."

Mr. Murakami's interest in mercantilism stems from his days as a struggling artist in Japan in the 1990s. Though he initially received wide coverage in the local press for his striking, animation-inspired art, he couldn't sell enough in Japan to survive, he says in a 2006 book. He hung around convenience stores for donations of throwaway bento boxed lunches, and collected cardboard boxes from liquor stores to wrap his artworks for shipping, he recalls.

That spurred him to try his luck in New York, where he soon became a phenomenon. "Superflat," an exhibit at the Museum of Contemporary Art in Los Angeles in 2001, was lauded by critics for its bold blend of Japanese comics and animation with fine arts.

Mr. Murakami is now well-known among the Japanese -- but they still aren't buying much of his art. Most of his works are sold at overseas auctions. Partly to blame is the lack of a thriving market for contemporary art in Japan. But Mr. Murakami also lays the blame on Japanese artists, saying they aren't entrepreneurial enough in marketing their work. "I put a lot of emphasis on money, because I've realized that you need time and money to produce art," he says in his book. "But Japanese artists have no business sense."

The retrospective, for now, won't be traveling to Japan. The exhibit in Brooklyn is the second leg of a touring show that also travels to Frankfurt and Bilbao, Spain. The show ran at the Museum of Contemporary Art in Los Angeles from October through February.

The artist is intent on living in the U.S. "It's my hometown," Mr. Murakami says of New York. "I love it, and hate it too. It's where I'm going to die."

wow, great photos! Thanks for posting!

I wish I could own some of his art *sigh*

I like Kai Kai Ki too! But what is he?
W

murakami is crazyyy at what he does i love it.

oh i would LOVE to own one of those!!!

thanks for the pics and article, maxter!

I love his art!