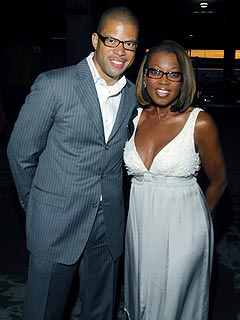 Star Jones has filed for divorce from husband Al Reynolds, the former View co-host has announced.

In a statement to Entertainment Tonight, Jones, 46, says: "Several years ago I made an error in judgment by inviting the media into the most intimate area of my life. A month ago I filed for divorce. The dissolution of a marriage is a difficult time in anyone's life that requires privacy with one's thoughts."

The statement concludes as follows: "I have committed myself to handling this situation with dignity and grace and look forward to emerging from this period as a stronger and wiser woman."

Jones and Reynolds, a banker who is seven years' Jones's junior, married in 2004 in an elaborate ceremony  complete with controversial corporate sponsors  that included 500 guests and the bride's arrival at the church in a horse-drawn carriage.

"Every single wedding fantasy I ever had was fulfilled, down to the most handsome groom in the history of the world," Reynolds told PEOPLE at the time.

As early as 2006, however, Jones was putting to rest rumors that her marriage was on the rocks. "These categorically false stories and their continuation are clearly being generated by someone for vindictive reasons alone," Jones said through her publicist.

In all, it has been a bumpy two years for the former View cohost, who parted ways with the ABC daytime program  and with its chief host and executive producer, Barbara Walters  in 2006.

In early February of this year, when her eponymous TruTV (formerly Court TV) show left the air, Jones expressed pride in her efforts and in herself.

In a statement at the time, she said, "Whenever there is a change in life, you re-assess, re-evaluate and decide if what you are doing ... is what you should be doing. My answer is yes."

What took her so long?

I was expecting that to happen eventually

They really sell us girls a bag of goods with the wedding fantasy bullsh!t. Star Jones was super intelligent (and a grown woman to boot) when she bought into it hook, line, and sinker.

That's sad. It's like he was caught up in everything she was doing and now he gets left by the wayside.

Gee, didn't see that one come from a mile away.

Score another one for Terri McMillan.

What gets to me is that these women never realize their husbands are gay. He is flaming and now she is filing for divorce? Now she can go exhale.

michie said:
Score another one for Terri McMillan.
Click to expand...

your wrong for that one

your wrong for that one

You know it's true. And, now her bitter ass can rest in peace, knowing that she helped another woman see the light.

it was only a matter of time. Star knew Big Gay Al was Gay, GAY, GAY!

I wonder who will sponsor the divorce.

Man! I knew she'd wake up one day and realize he likes pole more than she does... oops!

In my own world