Back in 1997 they gave all of their fans a special treat by making Spice World, and now the Spice Girls are working on a sequel.

According to Emma Baby Spice Bunton, the Wannabe singers are gearing up for the film project and excited to get rolling.

Bunton told press, Now we're all involved in the new Spice Girls film, which is being done by Judy Craymer and the team behind Mamma Mia! We email each other ideas and we are overjoyed it's happening.

As for the 13-year delay, We would've liked to do another film, but after Spice World, there was an album, then a tour and then Geri left, so it didn't happen. 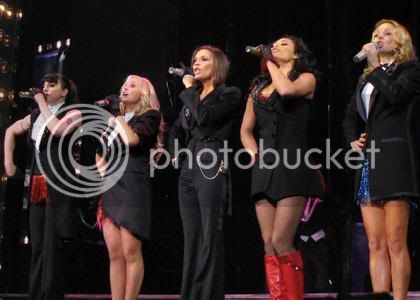 Just read on Perez, it's not true. Emma Bunton denied it on Twitter.
•••

omgosh i use to love them when i was younger... good to see them reunite
•••

Bradysmum said:
Just read on Perez, it's not true. Emma Bunton denied it on Twitter.
Click to expand...

Man, so they fabricated her quote?

The Spice Girls have denied reports that they are set to reunite to release a sequel to their 1997 movie Spice World.

Emma Bunton, writing on her Twitter page, Twitter.com/emmabuntonheart, explained that the five-piece will not be teaming up with Mamma Mia! producer Judy Craymer for a film based on their current West End musical Viva Forever - as had been claimed.

"Guys I'm sorry but I DID NOT mention that we would be doing another film!," she Tweeted. "But we r very excited about r musical in the theatre!".

Her comments came after the Sunday Mirrror reported that a movie was in production featuring the band's hits 'Wannabe', '2 Become 1', 'Who Do You Think Are?' and 'Say You'll Be There'.

The Spice Girls are currently putting the finishing touches to their musical with Craymer.
Click to expand...

I didn't believe it, Vicky B has so been "over" the Spice girls for a long time.
•••

hahaha, I remember Sporty was the only one with a good stand-out voice
•••

Yeah, yet she's the least successful.
•••
You must log in or register to reply here.
Register on TPF! This sidebar then disappears and there are less ads!
Sign Up
Top