was just wondering.......... has anyone else had a problem where the edges of their speedy are getting extremely worn and the piping starts coming out??? On my one speedy, the whole corner has worn away and the piping is sticking out almost in a loop-like shape........

Haven't had this problem with my Azur Speedy.

I am guessing that LV would fix it, but then it may be expensive and not worth it - consider the overall condition of the bag and then perhaps its more cost effect to buy a new one!
I

My first LV, was a speedy azur 30. I used my speedy for about half a year, and realized that the piping was getting worn out and eventually torn apart.. it looked disgusting. I just trimmed it, and brought it to LV. I believe the estimated cost was about $80 to replace the piping! I did not get it fixed. However, I somewhat got turned off by the piping issue.. and stopped using LV all together for a while..

Till this day... I blame myself for purchasing the display model. The speedy was my first LV, so I had no existing knowledge about the patina process or whatnot. When I purchased it at 5th Ave, they weren't that helpful... I purchase the speedy with patina and it was probably on display for a while... I'll never walk into LV @ 5th Ave again.. I always go to SOHO. Although it's depressing, because 5th Ave is so beautiful.


I've attached a couple of photos of my speedy now. It's been 3 years since I've had her.. and it's just collecting dust. But I still love her, even though she's a little messy. :buttercup: 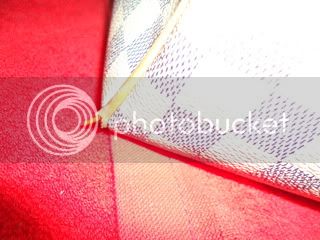 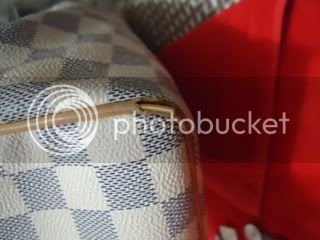 ^Oh I think the $80 dollars is worth it to have that fixed! At least it just won't be lying unused in the closet!

thanks for the info ladies!!!!
S

May I ask how this happens? I have a speedy (bought it in March), but so far the corners still look brandnew. Now I'm scared this will happen to my bag as well.

Spicy87 said:
May I ask how this happens? I have a speedy (bought it in March), but so far the corners still look brandnew. Now I'm scared this will happen to my bag as well.

neither of my speedy bags have this problem. i wonder if it would be considered a defect on a bag so young.

The piping came out of the corners of my speedy after using it for about three years. LV fixed it for about $65 for each side so it came out to be around $130ish in total. The only problem is that now the vachetta on the piping is a different color from the vachetta of the handles.

ive seen this issue on alot of newer speedies on ebay,...i think its mainly because they have used thinner leather all over the bag. i had a speedy from 2006 and one from 1995. the 1995 had such nice thick piping it was like indestructible. the 2006 speedy had small cracks all on the piping. really bugged me as i baby my purses alot. i ended up getting the leather on the 2006 redone and selling it. i sold the 1995 as is. id prefer and older speedy over the newer ones any day. i would take it to the store and raise hell.

ughhhhhhhhhh itsgloomy mine looks exactly the same, but its even worse off!!!!!!!!!

i am still using it, but i should probablly just spend the 80 dolalrs and get it fixed of thats all it is.

hmm,i think you should take it to the store and let them fix then.

hi does any one know what it will cost to fix the piping of a speedy 30. 1 side of the bag has worn corners. it looks like it is 2 halves to make the one piece so i need to know what the cost is for the whole piping of the bag is on one end of the bag. hope this makes sense!

YES! my azur speedy, which was less than 1-2 years old did this. i took it to LV and they fixed it for free. i think it would have cost $150?

my mono speedy, which i have had 5-6 years and carry WAY more has not shown any signs of trouble.

Two of the corners of my Speedy 25 also have worn away. Im pretty sure it didnt scrape the wall.

I just noticed it today. I expected so much more from an expensive bag.

Bella214 said:
Two of the corners of my Speedy 25 also have worn away. Im pretty sure it didnt scrape the wall.

I just noticed it today. I expected so much more from an expensive bag.
Click to expand...

This bag looks well-worn from the pics. You can always take it to Louis Vuitton and ask for the pipping to be replaced. It’s a standard repair.
Last edited: Oct 13, 2018
Reactions: lizaariani59 and Bella214
You must log in or register to reply here.
Share:
Reddit Pinterest Tumblr WhatsApp Email Link
Register on TPF! This sidebar then disappears and there are less ads!
Sign Up
Top Bottom