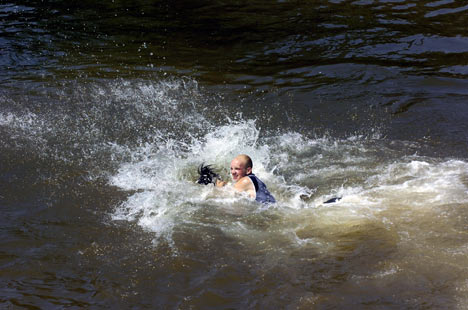 The horse plunges into the deep water 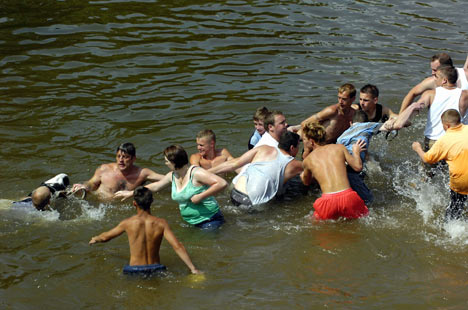 Onlookers try to pull the horse to safety 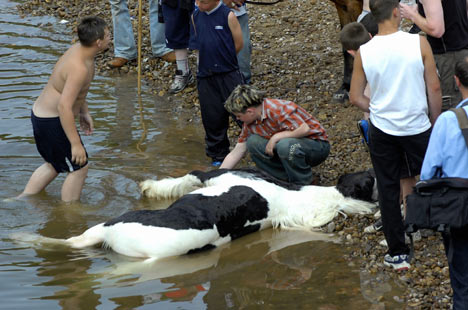 The animal lies lifeless by the water's edge 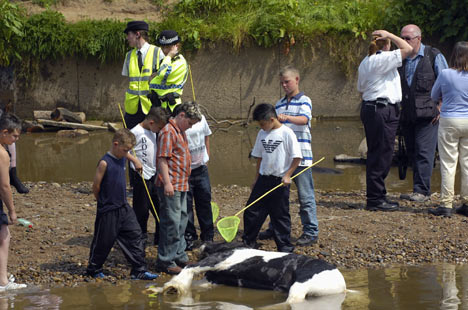 The lifeless horse lies on the river bank
•••

For almost 350 years, horses have been ridden into the River Eden to be washed.

But this year, the annual ritual at Appleby Horse Fair ended in a sickening spectacle. Although dozens of horses swam safely in the water by the bridge in the Cumbrian town, one appeared to lose its footing and drowned despite frantic efforts at a rescue by onlookers.

The fair for horse trading began at the site in 1685, when James II granted it the protection of a charter. It is attended by 25,000 visitors each year. At the event, horses are raced in front of prospective buyers. And, to prepare them for the day's trading, they are washed in the Eden

Tradition dictates that the horse's head should be dunked beneath the surface before it is ridden on to dry land again. But this distressed animal is thought to have pulled away from its owner in a panic, lost its footing and possibly broken a leg.


It sank beneath the water and re-emerged but its rider continued the ritual, dunking the horse's head under the water.
Again, the animal disappeared, but did not surface again. Worried onlookers began a human chain to pull the horse to shore. But by the time it was brought to the bank, it was dead. The rider fled.

One man, who was present at the horse's drowning, said: "It's a macho thing with the young men.
"They are trying to prove how hard they are by riding the horses through the deep part of the river. That poor horse didn't want to be there. You could see the terror in its eyes.
"The rider just wasn't capable of handling it. An experienced rider wouldn't have got into that situation."
But Eden councillor Ella Langan, who chairs a committee in charge of planning the event, said there were no plans to stop the tradition in light of Friday's accident.

She said: "We're hoping to introduce a ramp for the horses to get into the water for next year, but there's certainly no way the historic ritual will be stopped.
"As I understand it the horse was bought earlier that day by someone who was specifically told not to take the horse into the water as it was not used to it.
"Of course this person insisted on taking it in. I'm told that the horse broke its leg while in the water before drowning.
"It was later hoisted out of the water but by then it was too late. All we can do is ensure that the RSPCA are there and on hand to make sure everything is safe.
"People have been trying to stop the tradition for years but it's part of history and is set in stone by way of a charter."
The horse show, which is held over seven days, is attended by Romany and travelling communities from across Europe.

Last night, RSPCA chief inspector Brian Jeffries said the organisation had launched a joint investigation with Cumbria Police.
He said: "We are extremely disappointed that it happened. "Those responsible for the horse have not yet come forward, but we are working to track them down."

That sounds like one tradition that needs to come to an end ASAP.
•••

This makes me sick. Horses don´t scubadive. So utterly useless and now the horse is dead.
•••

I hope that the person who kept dunking the horse's head underwater is charged with animal cruelty.

How disgusting. The horse looks way to small to have a large person on it, especially when expected to swin. Hopefully this tradition can be put to an end after this incident.
•••

*ugh* I would have lost it. That is so sad. Poor horse.

That guy deserves to have his face beat into the ground. What is the point of this "tradition" again? *sigh
•••

I find those pictures very distressing, perhaps a warning in the title is appropriate as I would never have come in here had a known that the pictures would have been posted.

I'm very sickened that this has happened. Poor horse

That is so sad and so unnecessary. Hopefully this makes people realize that it's a very stupid tradition that puts those horses in danger for no reason.
•••

Danica said:
*ugh* I would have lost it. That is so sad. Poor horse.

That guy deserves to have his face beat into the ground. What is the point of this "tradition" again? *sigh
Click to expand...

this story makes me extremely sad...kinda wish I hadn't clicked in...

As soon as I read the title my heart sank and after reading it I am certainly teary. This is such a horrible thing. I can't imagine the state I would be in if I witnessed such an act. I truely hope they catch the rider and give him what he deserves.
•••