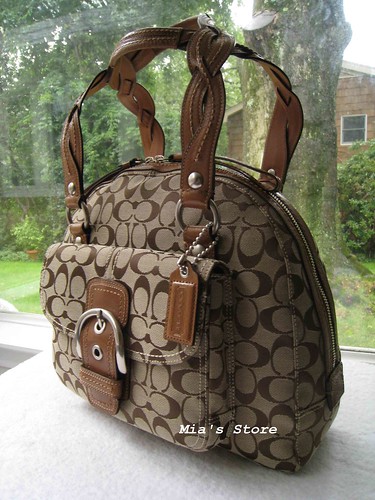 kattykay said:
kinda has a luci vibe to it
Click to expand...

I liked the metallic one:

selketkrb said:
I liked the metallic one:
Click to expand...


If I recall correctly, this one was on the website as recently as this past spring, but I never saw it in the store. I really like this bag as well! This is one I'd get in sig. I've only got one sig bag the rest (20+) are all leather, but I really like this one!

Stunning, especially in the metallic!
•••

Oh cuteeeeeeeeee I don't like that it's sig and tan (kinda blah in my opinion) but I adore the style!
•••

I'm hoping this bag (or something similar) will be released in the new Soho floor set. Is Soho set out to be released at the end of this month? I have always liked the Soho satchel, but DIDN'T like the zipper -- the way it started and stopped like a jacket.
•••

That bag is BEAUTIFUL!! I really hope that we see it in the boutiques
•••

I don't recall seeing anything like this on the product knowledge cards for the new Soho items. I'll be happy to double check for you on my next shift though.
•••

selketkrb said:
I liked the metallic one:
Click to expand...


Yeah, I like this one too, actually, and I've seen it as well as the leather one at the outlets. I almost bought it but just have way too many leather bags on my list and probably wouldn't get around to wearing it that much.


The new boutique Soho line is going to be very different. One of the SAs was talking to me about this and was very excited because it doesn't really "look" Soho. I asked to see the binder sheets when I was at my local boutique, but at the time, they said they didn't have them. I know some stores do, though, but I forgot to ask after that at other places.
•••
You must log in or register to reply here.
Share:
Reddit Pinterest WhatsApp Email Share
Register on TPF! This sidebar then disappears and there are less ads!
Sign Up
Top