So, It Was Britney's Birthday Yesterday Y'all !

X17
check out Britney and Sean's afternoon at the LA Zoo. Mommy was so cute with her cute little boy and it looked like they were having a grand 'ol time, though you've gotta wonder if the paparazzi were more like animals than the animals. But Britney was in good spirits because, after all, it's her birthday! -- Happy 25th, Brit!

X17
Girl can't catch a break -- heading home from the zoo, she decides to stop for some dinner and then shopping at Dolce & Gabbana at Sunset Plaza and just look at what she picks out. Were D&G out of their minds when they designed a bolero made out of white rabbit?

wow! I just posted this the same time you did!

maybe we need to combine?

Her hair extensions look much better these days.
I think SP is such a cute little boy, I can't believe how big he's gotten!

I worked night shift last night (still have a few babies that need their bottles every 3 hours) and as I was coming in one of the keepers told me that BS was at the zoo all day with one of her kids. Sorry, no photos. But you will probably see some soon because she was surrounded by dozens of paparazzi. She was taken around the zoo by one of our curators in a golf cart but security was tight around her so no one could get to her. The paparazzi apparently followed her to the zoo from home and had to stand in line to pay to get in and once they did, they ran to find her. The curator said she was really quite nice but one of the other keepers told me the only thing that grossed her out was when she pulled a piece of gum out of her mouth and put it in her kids mouth!

(aren't both her kids a little young for gum?) oh well. It was her birthday apparently and she had a great time.
that was our excitement for the day.

shes soo adorable and what a wonderful gift to herself...i love the jacket!

This may have been the magic moment as she is in front of the chimp exhibit and it was the chimp keeper that told me what she saw....

she looks good.. and her baby is cute!

I think she looks great ! I'm presuming she has her knickers on ! 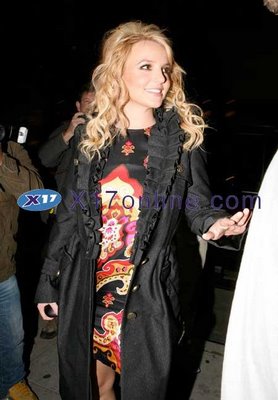 Britney Spears entered her second week of non-stop partying by celebrating her big 2-5 in style at paparazzi haven, Mr. Chow, in Beverly Hills

She looks a lot better in these pictures, seems like she's done something more with the hair definitely an improvement! Generally I'm not a fan of Britney's style but she does look better here!

I believe the dress is Dolce Gabbana

She looks cute with baby Sean. I love her boots !
You must log in or register to reply here.
Share:
Reddit Pinterest Tumblr WhatsApp Email Link
Register on TPF! This sidebar then disappears and there are less ads!
Sign Up
Top Bottom