Seller refuses to refund despite Ebay agreeing my side

Hi,
I was wondering if anyone had experience of Ebay adjudicating in their favour but then the seller refuses to refund the money?
Does Ebay refund you and then reclaim the money from the seller or is it supposed to come directly from the seller?

I bought a Hermes scarf ring from a Belgian seller, nadiebo123, which was listed as New with Tags under the Item Condition. When I received it, it was obviously very used with quite a few scratches. When I tried to discuss this she got quite abusive, accusing me of scratching it myself and claiming that she had never said it was new (obviously doesn't remember what she put in her own listing). Not sure why I would scratch it myself, since I had got it at a good price (if it had been NWT)!

I took this up with Ebay's Resolution centre and it was decided in my favour. I returned it promptly, making sure that I paid for the most secure postage with insurance, signature etc. A week after Royal Mail said it had been delivered, I still had not received any refund, so I contacted Ebay again. They asked me to send them a copy of my postage receipt, which I did and also pointed out that the seller had already relisted the item (this time she did declare it to be used). Ebay have said that they have issued me a full refund 3 days ago through Paypal but I still haven't received anything. Is this normal?

In the meantime I have received another email from the seller:

By the way she charged 20 postage (for a scarf ring that weighed less than 70g including packaging!) when it only cost her 5. She also goes by the name of Missme1, so I suggest you do as she says and give her a miss!

Call ebay again, they should have her paypal account frozen for that amount and once they have the tracking number that shows delivery, they should be able to refund you. She'll have to refund you the full purchase amount including shipping charges!

Thanks Pigalle! So should I expect my refund to come from Ebay or directly from the seller?

Ebay will refund you from the seller's paypal account...so it's from the seller but it's involuntary on her part. What a rotten seller. Make sure you give her appropriate feedback...

Hi, so sorry this has happened. I don't have experience myself of this situation but from what you've said I think ebay are the ones you need to deal with now though, if they have said they've refunded you.

Did ebay say it would take some time to go into your PayPal account? Maybe it just might take a few days. Also, can you check that they paid it into the correct account?

Do not have any more correspondence with the seller, only communicate through the ebay/PP case. If they ruled in your favor, they will refund you; she will have to pay or else they will close her PP account. And they will still get her in the end. And I would leave Fb that reflects what happened.

I left appropriate feedback that stated the facts very briefly (Sold as NWT but was scratched/used.Returned but no refund. Seller reposted item); this is what she has replied:

Nice! Here's a photo of the item purchased to show what a "liar" I am! 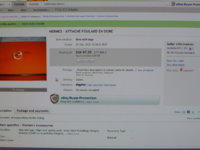 I agree with the other ladies. It is not up to her to decide, you will get your money because Paypal refunds you!
Sorry for the bad experience! (My god, she lives super close to me!)

Repeat - I would not further correspond with this one.

I would not talk to this nut job anymore either. I believe that as long as you can prove that you returned the goods to her, Ebay will refund you. However, you will have to call them with your tracking information first. (They didn't refund in my case until I badgered them for it, after I was able to prove that the seller that ripped me off had ample chances to pick the item up from the post office and was just being a pain in the $#@.) Good luck to you!

oh my gosh. I can't believe the woman thinks she can have the scarf back AND keep your money! What a weirdo!!!! People are nuts these days.

Are you sure the money has not been refunded back onto your card you paid with through paypal? It happened to me once, they insisted I had been refunded but I couldn't see it in my paypal and it took a while to show up in my credit card statement.

i would call again to make sure it goes back to your paypal. the seller relisting it is proof enough they have it back!
You must log in or register to reply here.
Share:
Reddit Pinterest Tumblr WhatsApp Email Link
Register on TPF! This sidebar then disappears and there are less ads!
Sign Up
Top Bottom