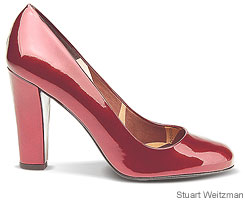 The Honor Roll pump from Stuart Weitzman, who places thin padding and sturdy shanks in his shoes. 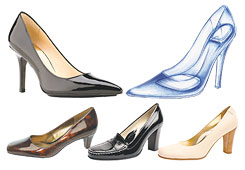 High and Mighty: Seeking
Comfort in the Power Heel

These days, stylish shoes come in two heights: flat and towering. Fashion magazines and stores are showcasing more flashy three- and four-inch heels than ever -- and sometimes adding on platforms that we once thought only Elton John would wear.

The pinch of high heels isn't an issue just for fashionistas. At the office, high-heeled pumps are the feminine equivalent of wingtips. A woman who wants a power shoe -- or added height -- will usually wear heels, even if they leave her wriggling her tingling toes in the privacy of the space underneath her desk.

But in recent years, a small but fast-growing group of shoemakers have tried to combine height and comfort, seeking solutions in orthopedic and athletic-shoe technology. I decided to try some of the latest heels that are marketed as comfortable and healthy, to see how they lived up to their billing. I also tried several shoe brands that have long been known for being more comfortable, if sometimes less fashionable.

All these technologies attempt to absorb and spread pressure, addressing the fact that tiny foot bones weren't designed to carry the weight that heels put on them. When you're wearing a three-inch heel, the pressure on the ball of the foot is akin to the pounding that part of the foot takes when you're running. And few people run for 10 straight hours -- the length of many workdays.

To see which were most comfortable for a full day of work, I bought six pairs of shoes ranging in price from $89 to $495, with heels from 2½ to 3 inches high. I wore each one all day and even hiked through airports with two of the pairs. For comparison, I also tried inserting arch supports and toe pads into some of my own heels.

There was a clear winner for comfort married with style: Taryn Rose, the most expensive shoe in the group. With contrast piping, metallic leathers, slim wedges and peep toes, the shoe line looked highly stylish. The $495 price for the Daphne model I chose could make such shoes prohibitive for some pocketbooks, but special built-in supports made it a cradle compared with the others.


A $275 pair of Stuart Weitzman heels lacked thick padding, but this shoe's sturdy footbed and toe room made it one of my airport stompers. And the selection was the most glam of any brand, with a wide range of materials from patent leather to snakeskin. Cole Haan's $275 Nike Air pumps also deserve a special note for combining comfort and style; they come in a variety of sleek-looking styles, including razor-point toes, open toes, slingbacks, wedges and some with a small platform. Still, the pointy toe made my toes numb.

I also looked at Naturalizer, Aerosoles and Ecco -- brands that have focused on comfort for years. Of the three, the $84 Naturalizers blended comfort and style most effectively, and, given the price, they were the best deal of all six pairs. Aerosoles, $83, and Ecco, $144, had more-limited offerings for office looks, though they had wide selections in lower heels and walking shoes.

For inserts to my own not-comfortable heels, I tried Dr. Rosenberg's Instant Arches in a favorite pair of pumps, and I stuck Foot Petals cushion inserts in the toes. The result was an improvement, but the built-in supports of the other shoes felt better overall. I would recommend inserts only for people who want to improve a favorite pair of shoes.

There's a reason that Taryn Rose shoes performed well -- the company was founded by an orthopedic surgeon named, naturally, Taryn Rose. She recently resigned from the privately held company, but continues to hold a minority stake, people there said. The director of design, Roberta Covari, described to me a construction process that starts with a wide, ergonomic "shoe last" -- a form around which a shoe is made -- to allow the foot to "lean properly." There are soft sheep-leather linings, a layer of a shock-absorbing material called "Poron," a sole made of a light material called "Wearlight," and a bottom that is part leather and part rubber for flexibility where the foot bends. Despite all this, Chief Executive Andrew Forbes said, "We don't like to think about them as orthopedic shoes."

It's a good bet that we're going to see more of this sort of thing. Taryn Rose's revenue doubled in the past two years to reach $40 million in 2007, says Mr. Forbes. And Cole Haan, owned by Nike Inc., has seen fast growth since it began inserting Nike's tiny airbags in some women's dress shoes several years ago. Cole Haan Air helped sales of Cole Haan dress shoes more than double over the past year, says Chief Executive James Seuss. The dressy Air shoes now represent approximately 30% of the company's assortment of women's shoes -- triple the amount of fall 2006. In fact, it's been so successful that Cole Haan plans to add the Nike Air bags to "all possible" men's and women's shoes in the spring 2009 line, Mr. Seuss says.

But don't expect super-high heels to go away anytime soon. Stuart Weitzman says he offers a range of mid-height heels each season, but when fashion editors arrive at his showrooms, they ignore shoes that aren't either flat or radically high. He argues that the pressure to get photographs in magazines forces less-established designers to create eye-catching high heels in order to get attention. The effect, he says: "They are almost forced into designing shoes that are uncomfortable."
L

Thanks for the article. For me, the search for comfortable dress shoes is endless...
You must log in or register to reply here.
Share:
Reddit Pinterest Tumblr WhatsApp Email Link
Register on TPF! This sidebar then disappears and there are less ads!
Sign Up
Top Bottom