Seal Pup Finds Shelter from the Storm on a Car Dashboard

After braving the stormy Dumfries, Scotland, weather, a savvy seal found some shelter ... on the dashboard of a car. 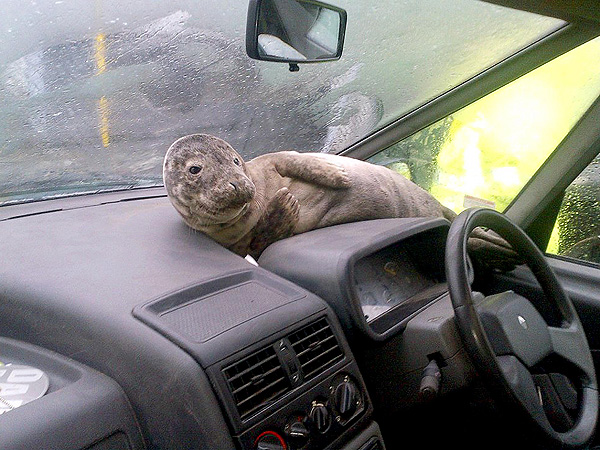 The 6-month-old pup, fittingly named Smartie, was first discovered wandering the area surrounding the Cairnryan ferry terminal. Concerned, staff tried to return the seal to the water. When Smartie refused, an employee put him in the trunk of his car to wait until animal rescuers arrived on the scene.

But Smartie needed a change of scenery.

The seal managed to wiggle his way from the the trunk to the vehicle's dashboard by pushing down one of the rear seats, reports the U.K.'s Daily Mail.

"He is clearly a very smart seal as he ended up watching the storm out the windscreen of the car from his warm, dry spot on the dash," said a spokesman for the Scottish SPCA, the rescue group that scooped up the pup.

Now, Smartie is living at the National Wildlife Rescue Centre near Alloa, Scotland. "We hope to return Smartie to the wild in about a month's time," said the rescue's manager, Colin Seddon, "but only when we're sure he's fully fit and able to fend for himself."

Awwwww. What a cutie pie.