So 10 days ago I bought a sarah wallet from LouisVuitton.com. There were a few things that bothered me about the wallet. My main concern was that it had been used and then returned. Then sold to me. This is now a non-concern as according to the date code, the wallet was made literally 2nd week of December - right before it was mailed to me! Fresh off the production line

The front button has some micro scratches. I mean tiny. Also the 'Louis Vuitton' stamp on the button seemed like it the Vui letters were not stamped as heavily as the rest of the word. This concerned me as I thought it may rub off and/or 'wear' sooner than it would had the whole word been stamped evenly. It's not super noticeable btw.

So, I ordered another sarah wallet - intending to return the one I felt was a lesser quality (why is this even an issue with such an expensive wallet

I rec'd the second one yesterday. Ok, so there are differences! I am wondering why?!!!

**So, the 1st wallet I purchased and rec'd has the stamping in black and it says "Made in France". 2. Also, the date code is in the very back pocket of the wallet and on the right-hand side.

***The 2nd wallet which came yesterday has the stamping in gold and it only says "Louis Vuitton Paris" with NO "Made in ***"? I'm guessing from what I've read is that the 2nd one was made in the USA? So, it doesn't say that? It only says Paris under the word Louis Vuitton. Again, its stamped in GOLD, not BLACK like the 1st wallet I rec'd. So, for the other difference in the 2nd one I rec'd, the date code is in a different place? It's in the first section of credit card slots, the 2nd slot back, and on the right side. It's NOT in the very back (large) slot like in the 1st one!

See pictures for detail please!! In the pics, my finger is indicating, pointing to WHERE the date code IS. First set of 2 pictures is of the 1st wallet I rec'd (made in December 2020 and also the one which I think I'm going to keep) and the 2nd set of 2 pics are of the 2nd wallet I rec'd which does not have the "Made in ***" part....and also the date stamp (made in 14th week of 2019 btw) is in a different spot.

I'm not an LV veteran so I am seeking advice on why the same wallet model would have date codes in different places? Also, why does one wallet have stamping in GOLD and one in BLACK?

Thanks everyone and Merry Christmas! 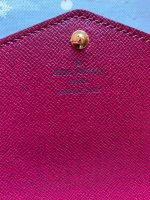 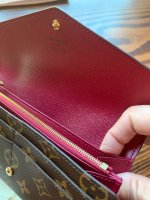 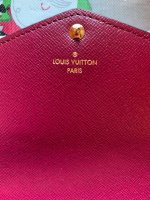 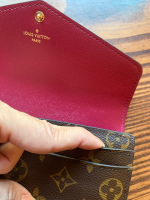