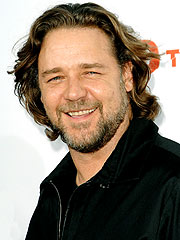 Russell Crowe is many things  but a metrosexual?

"I love going shopping," the American Gangster star, 43, tells Men's Journal for its new issue, which went on sale Tuesday. "I have a black belt in it. My wife [Danielle] really appreciates that in me. Whatever you need, mate, I'll get it."

As for his technique once he hits the store, Crowe claims, "I can do the supermarket in six minutes. I can pick out the first nine things my wife would like to try on. I'm not bragging; it's fact. I have retail-therapy issues. But I am cool with that. I shop with a big smile on my face."

The article (titled "Our Favorite S.O.B.") describes the actor  who's had more than his fair share of negative press  as "pugnacious and difficult," but also "charming and endearing."


Baptism Not Under Fire

His decision to get baptized along with his sons  Charlie, 3, and Tennyson, 1  would likely fall under the latter categories.

"I'd like to do it this year," says Crowe. "My mom and dad decided to let my brother and me make our own decisions about God when we got to the right age. I started thinking recently, If I believe it is important to baptize my kids, why not me? I do believe there are more important things than what is in the mind of a man. There is something much bigger that drives us all. I'm willing to take that leap of faith."

Not that he's denying his reputation for landing in hot water. "Look, I call a spade a spade. I don't deny that," he says. "But my intention, for want of a better word, is a certain purity." 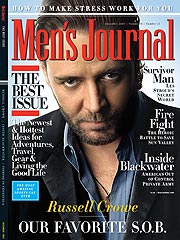 Having recently shared with Jay Leno his thoughts on the joys of fatherhood, Crowe also goes on to say his wanting to become a parent in the first place "was somewhat in my control. The voice in my head said to be patient. When you become a dad you should have your life in order."

With a sigh, he adds, "But there is a bit of regret there. You run the clock down. How much longer are you going to be around? I do feel more vulnerable. That's a given."

As for the future lessons he'll teach his boys about the opposite sex, Crowe says, "Look, when it comes to women, you are talking about mysteries that haven't been unraveled by the wisest scholars of all time. I'm not going to be able to do that. But I can teach my sons to respect them."

I seriously love him

Nice to see he likes to shop! I wish my DH was like that.
R

I can't stand him. Sorry ladies.

I wish my SO loved to shop. He won't last more than 5 minutes

He's so hot when he's cleaned up! Otherwise, he just looks like he belongs on a beach somewhere, surfing LOL

I dated a guy who liked to shop, and he would appreciate looking at the new things I bought on me. he was very complimentary. It was great.
You must log in or register to reply here.
Share:
Reddit Pinterest Tumblr WhatsApp Email Link
Register on TPF! This sidebar then disappears and there are less ads!
Sign Up
Top