I'm around 3 months post-op. I had a full incisional procedure done with Dr. Chung at Item Clinic in Gangnam.

I had consultations with several different clinics beforehand, but finally decided on Item Clinic. I had watched some reviews of people who had the procedure done at that clinic, and I liked the look of the results. Also, one thing to note is that some of the clinics I went to claimed that I needed certain procedures such as ptosis correction and botox, but the doctor at item clinic told me that I didn't need it done, and explained why my muscles were not weak and therefore did not need that additional procedure. I was wary that some other clinics were recommending additional procedures just to charge me more. I appreciated Dr. Chung's honesty.

My eyes before surgery were fairly fatty, and had a lot of extra skin. Therefore, full incisional surgery was recommended to me.

After I went for the initial consultation where we discussed what look I wanted, how much of a fold, cost, and other details, on the day of the procedure, there was also a final consultation to confirm everything.

This was my first surgical procedure, so I was quite nervous, but it went very smoothly. They put me to sleep for a few minutes in order to inject the local anesthesia in my eyes. I did not feel any pain during the procedure and the doctor chatted with me a bit as it was happening.

After it was finished, I was led to a room where I slept off the anesthesia for a bit, and rested my eyes. When I was feeling well enough, I travelled home by myself - after being given follow-up care: icepack, medicine, and pumpkin juice for swelling.

Initially after the procedure, I was a bit worried because I did not want prominent double eyelids but instead a more natural look. In the beginning, it did not look as natural as I wanted, but now that more time has passed, it is becoming more natural little by little. So if you decide on getting double eyelid surgery, be aware that it will take months for the swelling to fully go down. 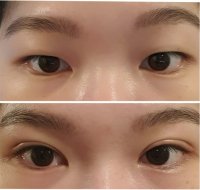 Wow! You eyes are beautiful!
Don't you mind to share quotes that you got?
Y

wow… it’s been 3 months and your eyes are still that swollen? hm… when I got my eyes done with regen’s dr.lee my eyes were back to normal within like few weeks lolz. Looks like recovery really does differently for everyone huh…
H

I think it's really good! My friend had sausages for 5 months! LOL
L