Home & Garden renting a hole in the wall?

Talk About Renting a Hole in the Wall 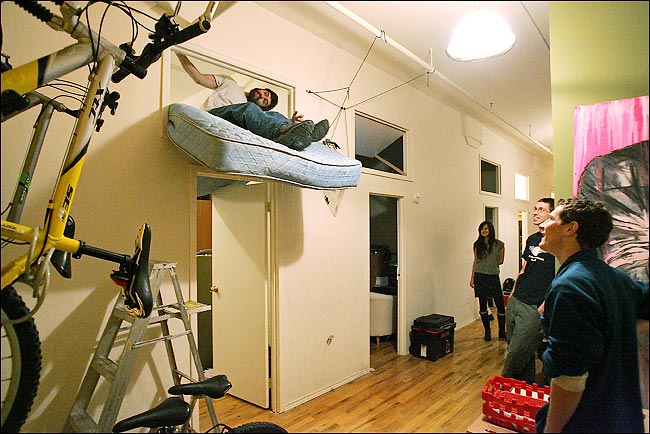 that is the most hysterical article i have ever read in a long time. and i can't believe a lot of people would even consider sleeping like that! unbelievable what people would do to get a place in nyc.
•••

OMG! It makes me so glad that I live in probably the best housing market in the enitre world! You can get so much bang for your buck here! Average house price with yard, garage, etc is about $130,000.
•••

This reminds me of how some trains in Japan actually have very tiny rooms on the train where you can sleep horizontally on top of other mini rooms. It's like a coffin. lol
•••

I read that earlier, and thought that it was pretty funny.
•••

Irissy said:
This reminds me of how some trains in Japan actually have very tiny rooms on the train where you can sleep horizontally on top of other mini rooms. It's like a coffin. lol
Click to expand...


Did you see the Top Model episode when they slept like that in a hotel??

It was so much fun, they were FREAKED out LOL
•••

Swedie said:
Did you see the Top Model episode when they slept like that in a hotel??

It was so much fun, they were FREAKED out LOL
Click to expand...


Awk, I missed that. Those "models" have been spoiled for way too long...

LOL! And I thought some of the apartments I lived in as a student were bad!!!
•••

I was just going to say, it seems just like those Japanese hotels !~


Oklahoma. I used to be in the mortgage business years ago and I loved it when people were being relocated to Oklahoma, they would be so excited about the house that they could buy. We would have young starting out couples buying houses much larger and nicer than their parent from back home! Here the thing you are going to pay the most for of couse is the location of the house or if you want land, how close it is to town. Example, my neighborhood is about 14 minutes from town can get just about anywhere in 30 minutes but far out enough I don't have to deal with all of the lousy traffic or lots of crime. Here is a good middle range example: I live on a quartler acre corner lot, 2 car garage, 2300 square feet house, 3 bedroom, 2 1/2 bath, ceramic tile counters and floor in kitchen, wood floor rest of downstairs and loft, carpet everywhere else, marble counters in all bathrooms, alarm system, in ground sprinklers, awesome landscaping (if I do say so myslef) and a custom designed in ground diving/swimming pool, quite neighbors, virtually no crime, lots of street lights, scenic entry to edition and all under $200,000! We have all 4 seasons here, but winters are pretty mild, it does get very hot and humid in summer, I think OK also has the best selections of restaurants and great food of all kinds (except for seafood - landlocked) We also have a convience store almost every mile or so in town, can't believe how much we miss these when we go elsewhere also our gas prices are probably one of the cheapest too as OK produces so much natural gas and quite a bit of crude oil. Both hubby and I drive big ol' SUV's with lots of room! the people here are some of the most friendly that you will ever meet too! also very down to earth, we are talking lots of old time oil millionaires that are just as nice as your next door neighbors! There are also a little bit of everything to do here, sports, tons of lakes, great opera and ballet companies, etc. The biggest downfall is there are not any high end shops, so the most you get here is dillards, coach, LR, Saks, Miss Jackson's etc. Also the drivers here suck, but now you have a nice and honest sales pitch of NE Oklahoma.
•••

But are there trees? I always picture OK as being flat and tree-less.