Razor-thin TV screen You Can Wear On Your t-shirt 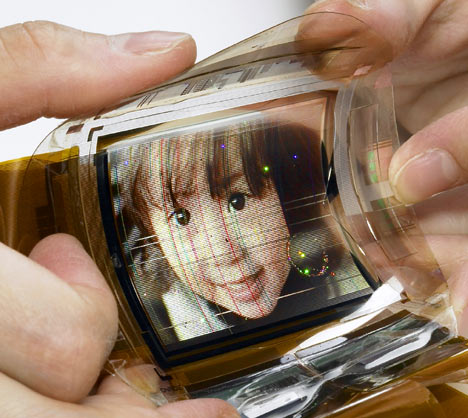 In the race for ever thinner displays for TVs, cell phones and other gadgets, Sony may have developed one to beat them all - a razor-thin display that bends like paper while showing full-colour video.

Sony Corporation posted video of the new 2.5 inch display on its' web page. In the video, a hand squeezes the 0.3 millimetre (0.01 inch)-thick display, which shows color video of a bicyclist stuntman, a picturesque lake and other images.
Sony will present the research and video at an academic symposium in Long Beach, California, for the Society for Information Display this week, the Japanese electronics and entertainment company said.
The display combines Sony's organic thin film transistor, or TFT, technology, which is required to make flexible displays, with another kind of technology called organic electroluminescent display, it said.
The latter technology is not as widespread for gadgets as the two main display technologies now on the market - liquid crystal displays and plasma display panels.
Although flat-panel TVs are getting slimmer, a display that's so thin it bends in a human hand marks a breakthrough.
Sony said plans for a commercial product using the technology were still undecided.
"In the future, it could get wrapped around a lamppost or a person's wrist, even worn as clothing," said Sony spokesman Chisato Kitsukawa. "Perhaps it can be put up like wallpaper."

Tatsuo Mori, professor at Nagoya University's Department of Electrical Engineering and Computer Science, said some hurdles remained, including making the display bigger, ensuring durability and cutting costs.
But the display's pliancy is extremely difficult to imitate with LCD and plasma screens, he said.
"To come up with a flexible screen at that image quality is groundbreaking," Mori said. "You can drop it, and it won't break because it's as thin as paper."


Article: News of the world.

That is amazing! I'd love to have video wallpaper, lol

That is so cool!

That's so crazy!!!! Thanks for sharing!

damn thats incredible! what would these people at SONY come up with next!!

Wow! That's amazing, what next?

I would definetly get the wallpaper... ^_^ Not too sure about clothing though.

sony is such an innovative company when it comes to televisions - theirs are head and shoulders above most of the ones on the regular consumer market.

wow! thats neat! i dont know what i would think if i saw someone wearing that around their wrist. haha

There were talks of a "newspaper" that was basically just a screen that updates itself and works much of the same way as this TV.