To anyone out there who has compared the Legacy Satchel 11130 to the earlier Legacy Satchel 10330, could you please give me some advice? I posted a few weeks ago that I one owned the 10330 style and had to sell it because it was just too heavy. 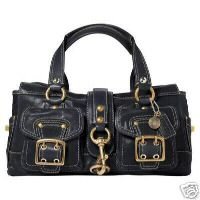 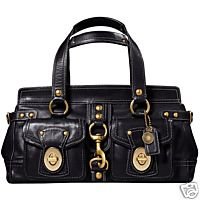 I was wondering if anyone knows if the 11130 satchel is any lighter? Also, if anyone out there owns the 11130, would you please give me your opinion on the bag. Thank you in advance!

It is much lighter, the leather isn't as thick as the legacy anniversary satchel. The hardware is much heavier and you have to unlock the leash each time you open your purse. The newer model is dog leash is just for show so there isn't much of a hassle and it has turn locks on the pockets which is nice as well. But in my opinion, the anniversary satchel (2006) is by far better quality and so much nicer. I have seen the other in person and its no where near as nice. But don't get me wrong great bag.......just not worth the same amount of money. I hope this helps?
W

Is the first satchel better quality because of the leather? Does the last one just seem cheaper made?

The bag is heavier, I just think its nicer and the quality of leather is a significant difference. I own the '06 one and love it, and the '07 model I saw in both boutique and outlet and wasn't impressed. its a personal choice. Still beautiful bags.

I also sold my '06 satchel, but MANY people have previously commented that the '07 was not as "nice"
W

I have the 11130 and I absolutely love it. It can be a bit heavy but I think the hardware is gorgeous and I just love the overall shape/design of the bag better than the 06 model. The 06 is beautiful too but I'm just more partial to the 07. Again, I love mine! HTH

Weight doesn't bother me, so I'm the worst to ask that question! However, I will say that I looked at both satchels because I thought of buying one (or both). Hands down the '06 is nicer (leather), but I didn't care for the small size and the flap bothers me (hard to open). So I bought a Mandy instead. IN fact, I'm not the only one that did that in the outlet at the time, and the SA made the same recommendation.

As for the '07 satchel, TBH, I don't like the look as well as the '06 (so I didn't buy it either), but I also don't agree that it was THAT much lighter than the '06. I think the leather is thinner on the newer Legacy pieces, and I have no doubt of that when I compare something like the Ali with the new shoulder flap. But, honestly, I don't know that it's going to equate to a major change in weight...or enough to help you if this already bothers your back significantly on the '06. Of course it's partly what you pack in a bag, but the Legacy leather bags are all heavy. Everyone that picks up my Bridgit always comments on how "heavy" it is, but it's soooo light in comparison to everything else I have. It's all relative... If you want a light bag, then I don't know that Legacy bags are your best option.

I think I would recommend trying that bag on if you can...or something similar before purchasing. Also, one thing I do when a buyer asks me this question is to physically weigh the bag for them free of all contents. That way they can compare it to one they already own at home. Of course sometimes bags aren't weighted well (evenly distributed), or the straps/handles make it such that it feels worse because it pulls on the shoulder. That's another thing you might consider...would a single strap bag that's a similar weight be better than a satchel type??

Both are beautiful bags, though! I'm personally a fan of turnlocks over the buckles, but I do love the look of the '06 satchel overall better than the '07.
You must log in or register to reply here.
Share:
Reddit Pinterest Tumblr WhatsApp Email Link
Register on TPF! This sidebar then disappears and there are less ads!
Sign Up
Top Bottom