ps 1 clasp does not stay closed

I recently bought my ps 1 for a good deal.

I was happy with my purchase, until I noticed the clasp does not stay closed.

I can open and close it, but when I hold the short handle the clasp doesn't stay flat against the leather. It lifts upward until eventually it completely unlatches.

If I hold the long handle, there is no problem with the clasp opening.

I want this clasp to stay closed! Has anyone ever had this clasp problem? I bought through Nordstrom Rack and highly doubt they can help. Does Nordstrom ever take care of these Rack problems? I will be disappointed if I have to return. I wonder if Proenza Schouler can help with this? Any help appreciated! :help: 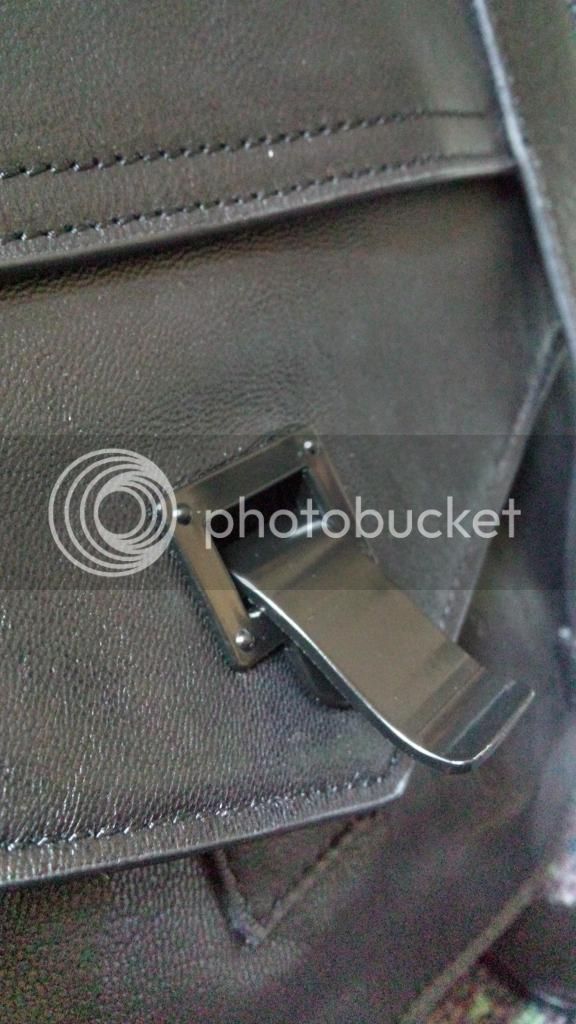 you can take it to Nordstrom and ask, I'm assuming it's a full line transfer or a previously altered item? Ask for a manager when you go and see what they say about it. I've purchased watches from the rack and full line will take out links and such, even without seeing proof of purchase. I'm not sure if you brought it in if they'll even verify where you purchased from...
S

Well all Proenza Schouler products come with a lifetime warranty, so I'm sure if you took it to a PS store they would be able to send it out to be fixed, whether they replace the clasp or can "tighten" it, if that's the issue. But Nordstrom does have amazing customer service, so you'll probably be able to do something just with Nordstrom.

I recently bought a PS1 from Nordstrom and had some issues with the clasp as well. Long story short, I took the bag to the Madison Avenue PS store and they refused to touch it since I had bought it at Nordstrom. They said I needed to go through my local store.

My local store took care of it and sent it to the resident Nordstrom designer bag repairman (which my normal sales guy told me was strange, since the girl who helped me should have just sent it to their PS rep) and they did a great job or repairing it for free.

I can't speak for Nordstrom Rack, but if you have a favorite salesperson at your Nordstrom I would ask what they suggested. Nordstrom really is notorious for going above and beyond in customer service, so it's worth a shot.

However, looking at your picture and knowing the traditional PS clasp, I was curious to know if the metal bar that sticks out from underneath the claspy part is going through the designated hole in the flap of the bag? If it isn't perfectly closed, it does have trouble baring the weight of the beg when held by the handle. (Sorry if that sounds confusing, but not sure how else to describe the metal bar thingy!)

I'm so sorry to hear that! Well I had a little problem with my PS11 calf hair bag and I contacted PS via their website and they agreed to fix my bag. I originally purchased the bag from Lane Crawford. Here's the link to my other thread -> http://forum.purseblog.com/proenza-schouler/i-need-help-my-ps11-is-falling-apart-875505.html
You must log in or register to reply here.
Share:
Reddit Pinterest Tumblr WhatsApp Email Link
Register on TPF! This sidebar then disappears and there are less ads!
Sign Up
Top Bottom