jennlt said:
I posted this article earlier today. Tyler Perry has a new "romantic" Netflix drama that premieres soon and I think Netflix has asked him to cross promote the Harkles because it's mutually advantageous for all of them. Apparently, all of Hollywood will do anything to make a buck even if it's means sacrificing integrity. Or maybe I'm just too cynical 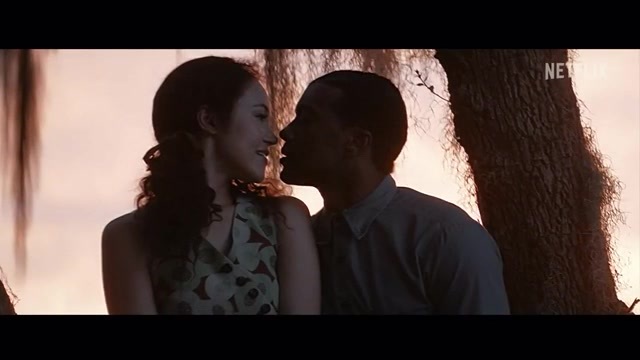 Tyler Perry is flexing his dramatic muscles in a new Netflix love story. It’s about a couple torn apart by family in 1940s Georgia, but...

I would think talking about Meghan and Harry (who don’t have anything ready for Netflix yet) would only distract attention from Perry’s own movie which he will be promoting.
Reactions: Hermes Zen, Chloe302225, andrashik and 5 others
•••

Old news? Why publish it now? Is he firing warning shots or does he really have more? 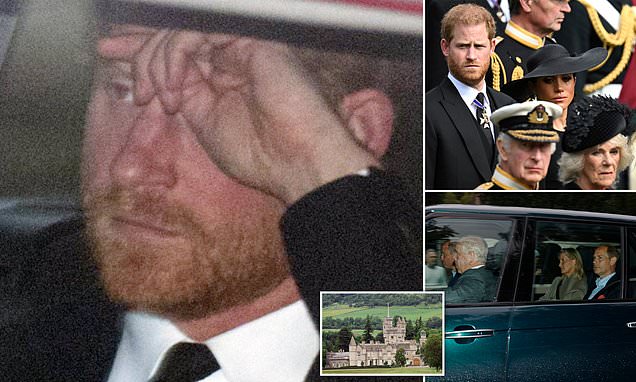 Harry 'snubbed Charles and William after Meghan BANNED from joining'

It's alleged that Charles phoned his youngest son to say it was 'not appropriate' for Meghan to be there and in the ensuing row Prince Harry missed his flight to Scotland.

He always behaves like a petulant 4 yo (apologies to 4 yo)
He could have say goodbye to his grandmother of whom he claim to be her “protector” and be very close to but instead he blew it
This two have the reverse Midas’ touch, nothing they touch turns into gold but turns into s#%^ instead
Reactions: kemilia, lulilu, Hermes Zen and 22 others
•••

miss_chiff said:
I missed this. Thx for reposting!
Gees.

It reeks of desperation for the Harkles and Netflix but I can't figure out how TP will profit from this association. He must owe someone a really big favor 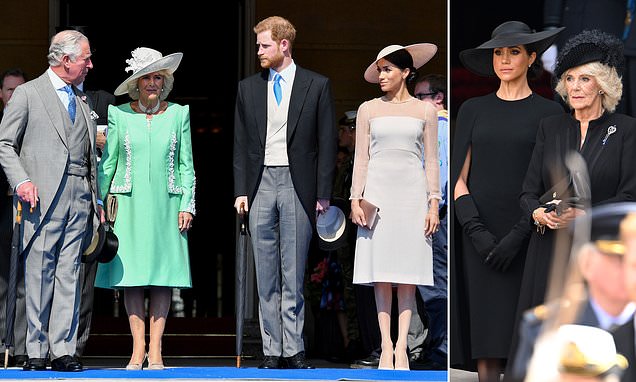 An explosive new biography of Queen Consort Camilla by Angela Levin has described how the then-Duchess of Cornwall 'warmly' welcomed Meghan and was 'fond' of her.

An explosive new biography of Queen Consort Camilla by Angela Levin has described how the then-Duchess of Cornwall 'warmly' welcomed Meghan and was 'fond' of her.

Not that MM every listened to anyone, but she was predisposed to dislike Camilla from the start because Harry had told her how miserable she made his mother's life. Yet she could have learned from Camilla how quiet diligence goes a long way in earning the respect of the public.
Reactions: lulilu, Pinkified J, Hermes Zen and 24 others
•••
C


The only place I heard this was from Lady C. I’m not sure the Queen had bone cancer, it’s really hard to know how it feels to be 96 until you experience it. But doing something one day at that age can leave you exhausted for up to 3/4 days afterwards. She worked so hard, her husband died and she was undoubtedly stressed at the M&H shenanigans along with Andrew. I’ve lost a few members of family to cancer and none was fine one day and gone the next. There was always a deterioration that involved a lack of lucidity but the Queen was a sharp as a tack with Liz Truss the day before she died. Some will dispute this but I believe that those with an incredibly strong faith don’t fear death and often feel ready to go.
Click to expand...

Agreed! I was only pointing out this had come from Lady C days before whoever it is that posted it came from LA.
Reactions: BlueCherry, etudes and EverSoElusive
•••

From a children's storybook

DoggieBags said:
Diana supposedly got a $22.5 million divorce settlement in one lump sum in 1996. In today’s $$, that would be about $42 million which is not that impressive when compared to the theoretical net worth of the BRF. She also got to keep her apartment in Kensington Palace and a yearly sum to maintain her office. She was married to the Heir to the Throne in addition to being the mother of a future king. Fergie got a much smaller divorce settlement from Andrew in 1996. Something in the neighborhood of 2 million pounds. So TW being married to the spare and not the heir may not get $20 million or more. Of course Diana and Fergie both got divorced in England whereas TW presumably would file for divorce in California which is a community property state. In very simplistic terms anything H had before he married TW would not be community property but anything acquired or earned after they got married would be considered community property. So if they acquired substantial assets after their marriage, TW should do well in a divorce. However, if the rumors are true and they really are in financial difficulty, there might not be much property/ assets to split up. Child support would be another source of contention. Any attorneys on this thread please feel free to correct if I got anything wrong.
Click to expand...

Sarah received a smaller settlement maybe because Andrew was no longer the spare and had become redundant at #3 since Charles already had two children #1W and #2H. Now, Dufus is in a worse situation because William has three children #1G, #2C and #3L which makes him utterly redundant and probably not worth much more than Andrew. What would ZedZed be worth considering that Sarah's received only 2 million pounds in 1996? In 2021 that figure converted to approx. 3,955,032,704 BPS (inflation etc.) Sorry couldn't find any results for 2022 and trust me I didn't do the calculations. So lets throw in a few more pounds for ZedZed who is no more important than Sarah was in 1996, but unlike Sarah, she abominably disparaged Queen Elizabeth II and therefore should be satisfied with last years' figures. Child support would of course be separate but I would never trust her to manage that account fearing she might use for her own desires.

ETA I'm not an attorney, but just having fun!
Last edited: Thursday at 9:48 PM
Reactions: Hermes Zen, Kaka_bobo, purseinsanity and 16 others
•••

charlottawill said:
Not that MM every listened to anyone, but she was predisposed to dislike Camilla from the start because Harry had told her how miserable she made his mother's life. Yet she could have learned from Camilla how quiet diligence goes a long way in earning the respect of the public.
Click to expand...

Missed out a few words: She's known to be passionate about making the world a better place for herself.
Reactions: lulilu, Hermes Zen, nzbaglover and 22 others
•••

Looking back, we could all see the decline in the Queen's health since Prince Philip's death. (Whether she suffered from bone cancer as the rumors say, I've got no idea of course.) The bout of covid she suffered last winter and likely the stress from the past 4 or so years probably added to her decline though. Harry, Meghan and Andrew contributed to that stress and all 3 of them should be ashamed. Andrew, for as much as I dislike him and I dislike him a whole lot, at least had the grace to basically disappear, not complain, and not leak stories to the press.

Harry and Meghan? Every single day it's a new complaint, a new trivial something about how they have been wronged. Neither of them can understand that the Queen had no wish to have Meghan at her bedside in her final hours? That Charles and his siblings only wanted those closest to the Queen and to themselves to be present at such a sad time? That Kate likely stepped back and didn't go to mollify Meghan?

It just boggles the mind, these two little toddlers masquerading as adults, addicted to manufacturing drama. Apparently, Harry can't spend 18 hours apart from Meghan. So, we have him throwing a tantrum that he couldn't bring Meghan when the Queen was dying, when he is the one who declined the Queen's invitation to go to Balmoral this summer with Meghan and the children when the Queen was actually still alive and would have been happy to see him.
Reactions: Sina08, kemilia, lulilu and 46 others
•••

I think Vanity Fair made this part up about Doria taking care of the kids all this time. No one else has reported that, have they?

While on this extended trip, Harry and Meghan left their two children, 3-year-old Archie and 1-year-old Lilibet, back home in Montecito with the Duchess's mother, Doria Ragland. The pair have been living in the ritzy California neighborhood popular with celebrities since 2020 when they officially stepped down from their positions as senior royals. 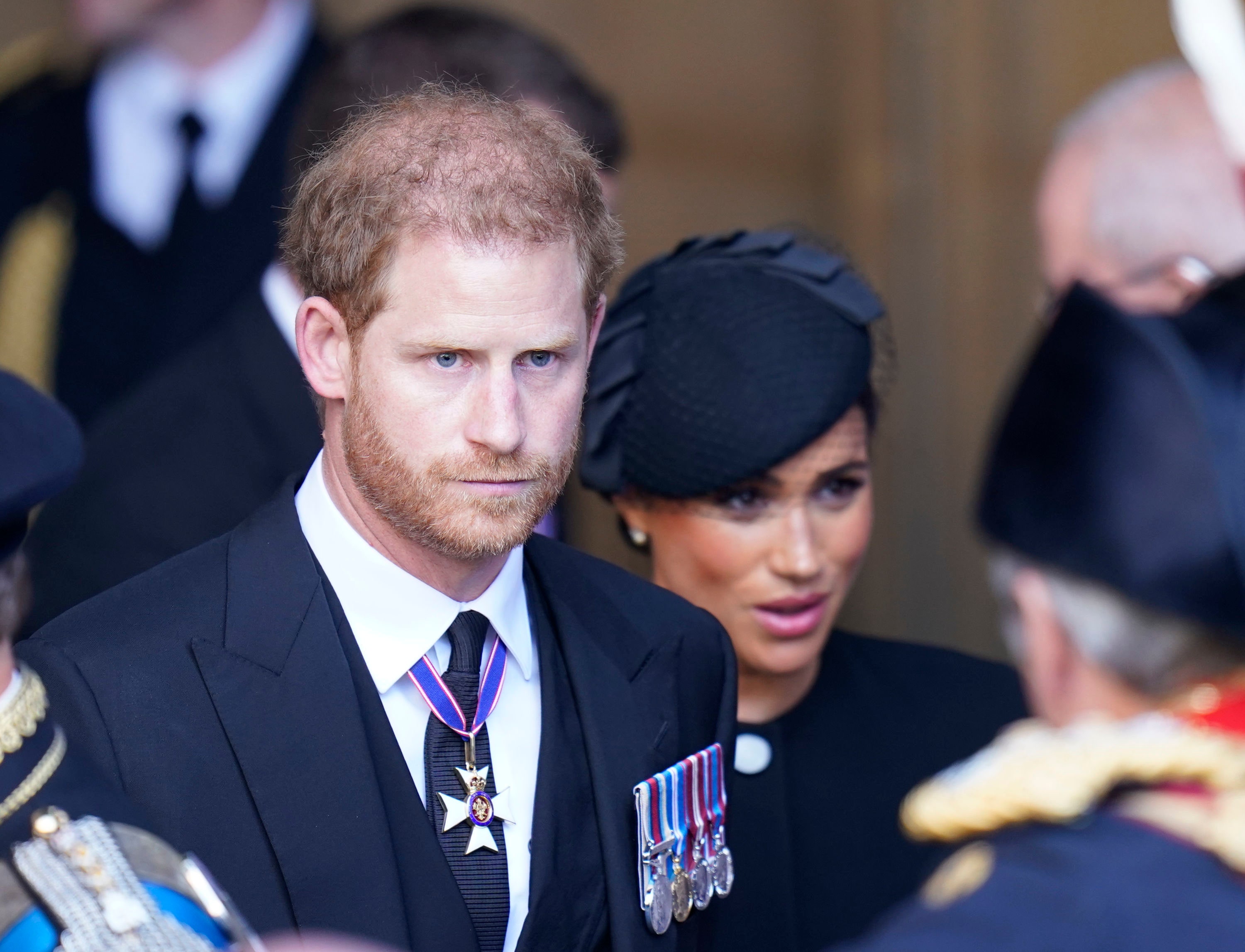 The royal couple was originally in Europe to support a number of charities they work with when the monarch died.

Redbirdhermes said:
I haven't read any speculation about what the effects of having COVID at age 96 would be. I did read that she had COVID in February, and told someone in April that she was easily fatigued. I can't help but wonder if the effects of this disease helped to shorten her life, by hastening her decline over the summer.
Click to expand...

I haven’t read anything on this possibility, either, RBH, but it was the first thing I thought when Queen Elizabeth’s death was announced. Seeing how thin she was at the jubilee and how frail she was in the photos with Liz Truss, I couldn’t help thinking, did covid contribute?
Reactions: MiniMabel, Hermes Zen, tannfran and 10 others
•••

charlottawill said:
Not that MM every listened to anyone, but she was predisposed to dislike Camilla from the start because Harry had told her how miserable she made his mother's life. Yet she could have learned from Camilla how quiet diligence goes a long way in earning the respect of the public.
Click to expand...

From what I read about TW, I would think that her predisposition to dislike Camilla has more to do with Camilla not facilitating her financial/power desires than whatever Harry feels about Camilla.
Reactions: Sina08, lulilu, Hermes Zen and 16 others
•••
You must log in or register to reply here.
Share:
Reddit Pinterest WhatsApp Email Share
Register on TPF! This sidebar then disappears and there are less ads!
Sign Up
Top