I celebrated a work anniversary and am considering a bag present to myself! I'm currently obsessed with red bags with red enameled chains at the moment and can't decide between these two options.
The Miu Miu quilted shiny leather shoulder bag in Rosso. The design is similar to the YSL Niki, and I find that bag very functional with the back exterior pocket. It's a vivid red and I enjoy bright colors. The strap threads through the flap to be adjustable for crossbody or shoulder wear. However, I know from the Niki that the bag hangs from the flap, and when full can pull on the front magnetic snap (unless this bag is stiffer than the Niki, which it might be).
The Ferragamo Viva Bow Bag in Nebbiolo has been calling to me. There's something about the flat, dark red leather and chain that I find mesmerizing. It's more sophisticated and age-appropriate for me (I'm 50, but I like to think a young 50 and I'm in a creative professional field, so no rules on style). However, I don't think it would be quite as versatile - the strap is not adjustable, there's no exterior pocket, and I would have to set it down flat on its back. Also, do you think that the puffy bag style is going to date quickly?
I would be so grateful for any opinions on this! Thank you!

Could you please re-attach pictures as pictures? They're shown as .pdf files.

My opinion: go with the Viva Bow bag. I think it's a gorgeous bag and Ferragamo is an underrated brand. They deserve more spotlight. I don't think 'pillow'/'puffer' (whatever you want to call them) bags are going to be out of style any time soon. No exterior pocket is disappointing, I agree. But I think this bag is quite elegant, slightly quirky and more sophisticated, so to speak.

With the Miu Miu... OK, this is a tough one, because typically, I'm a big fan of this brand. But this particular bag is a straight rip-off of the Niki.

Wasn't able to edit my original reply - and my Chromebook refused to generate jpgs this morning! But here are photos: 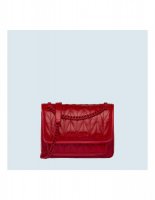 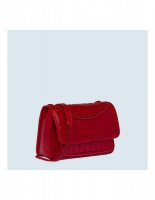 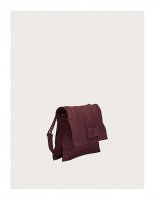 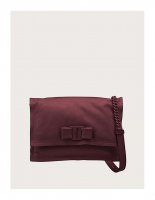 Neither. They will both date and the Chanel won’t (depending on the style). If Chanel is what you want, then don’t settle. The miu miu bag looks too much like the ysl Nikki bag and personally I if I wanted this style then I would go for the original. I don’t like the ferragamo bag and it is not versatile so that would be out. If you like the puffy style then consider the ysl loulou bag. It’s puffy but not as puffy and trendy as their puffy pillow chain bag... not sure of the style name. The ysl lou lou is more classic looking and versatile. The leather is also reasonably durable.

They’re nice...but I voted neither. Keep saving for a Chanel, or as @earthygirl suggested, consider a YSL Loulou. It’s a great chain flap bag! It doesn’t have the red chain, but honestly those coated chains tend to chip quickly. And it doesn’t have a back slip pocket, but the internal organization makes it super easy to use. 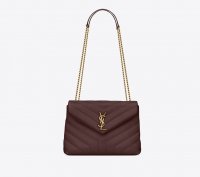 I think the red MiuMiu will tie you quite a bit, SF keeps the value reasonably well, has really good quality and that burgundy colour is a bit more versatile, while a Chanel is a bit of a dream for most people, I find that you need to baby them a lot, I prefer something that is lower maintenance, personally

foxgal said:
They’re nice...but I voted neither. Keep saving for a Chanel, or as @earthygirl suggested, consider a YSL Loulou. It’s a great chain flap bag! It doesn’t have the red chain, but honestly those coated chains tend to chip quickly. And it doesn’t have a back slip pocket, but the internal organization makes it super easy to use.
View attachment 4929716
That's so funny that you recommended the LouLou! I know it well 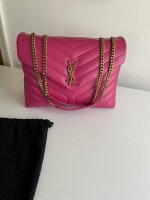 I vote for Ferragamo!

PROS FOR FERRAGAMO
CONS FOR MIU MIU
In other words if you want to splurge on a bag that will last and has good customer service I definitely suggest Ferragamo.

P.S
I also have several Ferragamo belts in croc and leather that are around 15 years old and there isn't a crack or wrinkle in them.
Reactions: Euclase
J

I think the Viva Bow is super cute, I got one in the woven version. It is a little small, and less versatile. I also think that the puffiness is subtle, and will likely deflate

. The leather is very nice and it is leather lined. I love that it is understated, but it would ne improved with more strap adjustability.

The MiuMiu bag is a too spot on YSL dupe. I'd skip - and MiuMiu bags tend to underwhelm in person. (for me at least)

I think if you really want a Chanel and know the shade you want - then you should get it. But I really like the Ferragamo and I am a Ferragamo fan.
Reactions: LuxBoy_AJ

save for the bag you really want. I don’t like either of the two bags posted. I think that the MiuMiu will probably age better than the Ferragamo will. I like Ferragamo but not this line, I think that the leather will get very smooshy with use, which I normally love but the design IMO is not suited for smooshy leather I feel that it will end up looking sloppy. I’m also not a fan of coated chains, they will chip at some point and that will irk me.

LuxBoy_AJ said:
I vote for Ferragamo!

PROS FOR FERRAGAMO
CONS FOR MIU MIU
In other words if you want to splurge on a bag that will last and has good customer service I definitely suggest Ferragamo.

P.S
I also have several Ferragamo belts in croc and leather that are around 15 years old and there isn't a crack or wrinkle in them.
Click to expand...

Thank you so much for the information! It was very good to know about your experience.
I have a few Ferragamo accessories, a belt and sneakers, and I agree the quality is excellent. I have never had a Miu Miu bag. I was tempted by the functionality, but it does not look as if it's worth the price it costs.
The good news is I got an "item back in stock" alert from Farfetch today, and there was one small Viva Bow Bag in Lollipop on sale. I was surprised by the price - about 40% off! - so that was the clincher for me. I and decided to go for it. The Nebbiolo (dark wine) was my first choice, but I will see if the Lollipop suits me - it looks very similar to Nebbiolo on Farfetch. If it's not appealing, I'll return, but it was a steal!
Thanks again for your advice and stories! I doubt there will ever be a Miu Miu in my future now!
Reactions: LuxBoy_AJ
You must log in or register to reply here.
Share:
Reddit Pinterest Tumblr WhatsApp Email Link
Register on TPF! This sidebar then disappears and there are less ads!
Sign Up
Top Bottom