Perez Hilton to have radio show 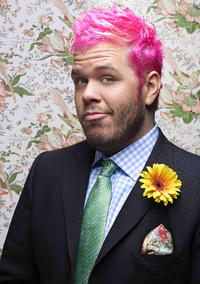 In a move that shows how the blogosphere is generating new talent for traditional media, Perez Hilton, ubiquitous purveyor of celebrity gossip on the Internet, is expanding his empire to the airwaves.

Starting May 5, the blogger, whose real name is Mario Lavandeira, will have his own twice-daily miniradio show. Running three minutes in both the morning and afternoon rush hours, the show will launch in big cities including Los Angeles, New York and Chicago, with a goal of rolling out to more markets in the next few months. Mr. Lavandeira will call into the biggest stations to chat live with the hosts; smaller stations will get a produced version with some quips tailored for individual cities.

The radio show is part of a strategy that includes more television appearances; the release this summer of a feature movie, "Another Gay Sequel: Gays Gone Wild," in which Mr. Lavandeira stars as himself; a coming book; and a possible development deal with Warner Bros. Records.

Mr. Lavandeira said he draws inspiration from other celebrities who carefully cultivate public images and business deals, such as Paris Hilton. "She and her team have been able to create her into this cottage industry," he said.

Some fans might find radio an old-fashioned place for brand extension, but Mr. Lavandeira doesn't agree. He said he regularly listens to radio, particularly while driving, and sees the medium as an opportunity to drive more traffic to his Web site. "It will hopefully introduce me, potentially, to a whole new audience," he said.

"We're going to prove that [the blogosphere] is a place where you can find talent," said Mr. Schuon.

I don't like Perez. All he does is report on other media outlets stories (tmz & x17), draws stupid stuff on their pictures and that's basically it!

A radio show... of course, he is too ugly for TV, but his voice isn't pleasant either.

kirsten said:
I don't like Perez. All he does is report on other media outlets stories (tmz & x17), draws stupid stuff on their pictures and that's basically it!

Exactly. What is it about this guy that everyone likes?? I cant seem to find that out..

i find him hilarious
E

I don't like him- he is just so nasty. I understand that can be the nature of gossip, but still, he is over the top and just plain gross w/ some of this postings and things he draws.
I

He doesn't posess any interviewing charm at all.

Wow. Perez is doing this thing! Good for him! I heard he makes around 30mil a year...
H

i do not like him. He's so boring and unoriginal. And I cannot stand his voice so I'd never be able to tolerate him on radio...actually I can't even tolerate him when I see him on VH1 either. I wish his 15 minutes of fame were over...they're alittle past due!

envyme said:
Wow. Perez is doing this thing! Good for him! I heard he makes around 30mil a year...
Click to expand...

^ seriously! I find that number hard to believe. I read in Rolling Stone that his site makes about 250K conservatively a year. I can't imagine him earning an additional 29.5 million a year or so, give or take a bit. I know he's got to be paid for his VH1 thing, but I doubt it's all that much b/c he earns cash by promoting himself that way, KWIM? Something is wrong with this world if Perez Hilton's "talents" merit 30 million a year, IMO.

Watch his video here where he talks about it. He also took to his Twitter page about it.

What do you all think?