OMG!!! So pleased with my outlet SA!!! Pics inside!

Hi Everyone! I was going about my day yesterday with no intention of going to the outlet; since Dillards had their sale I figured I'd head there instead. Well, I was on my way there after work when my favorite SA called from the outlet to let me know they received lots of full price transfers and he was holding something for me. I made an immediate u-turn and headed to the outlet instead. I found a couple of goodies besides what he was holding for me

First up are these lovely wallets that I had my eye on but did not want to pay full price for. I couldn't decide between the pink and silver (they also had teal and purple) so I got both. Item # 43301; original price $138. They were on clearance so after the 50% and 20% they were $51.99 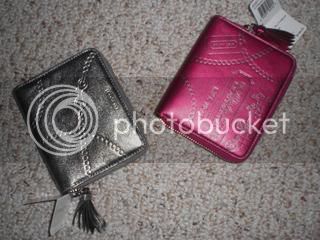 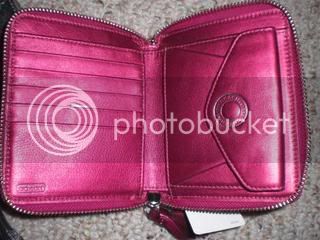 Now, on to the reason for the deviation from my Dillards trip. I have to preface this by saying that both SAs who look out for me at the outlet work partime so it's not often that they are there when the good stuff comes in. I totally lucked out yesterday when I got the call. 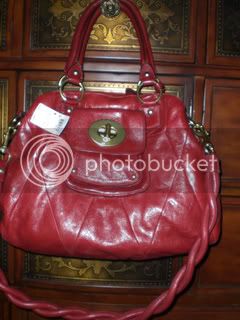 The place was mobbed, clearly everyone got the memo that they received full price transfers. The resellers were out in full force and it did not appear that they were being held to any item limit. Apparently they received quite a few large Inlaid Brookes (gorgeous) but they were gone by the time I was there...got to see them because about three ladies were in line holding them. My Kira was the only one and she was quite the topic of conversation while waiting in the very long line. At least six ladies approached me about her and kept asking the SAs if they had more. Anyway, they had lots of bags and apparently many more boxes to open. My DH is sweating already

Oh wow, they're ALL gorgeous!

I love the metallic wallets , I bought the mini skinny in blue/purple from Dillards but would much rather one of these wallets!!
The silver on the metallic is very pretty in real life!

im dying for a green kira, you're SOOO lucky =]

Love the wallets and the Kira!

wow, those are so pretty, you always get the nicest things! can you tell me the style # for the wallets pls?

the land of want

. It. All. I have some of the metallic wristlets and mini skinnys but would love to get a wallet or two. Something about them just pulls me in!

IN LOVE WITH SAGE

you're really lucked out! Congrates on your Kira, she is TDF!

Gorgeous Kira! You lucked out!

Love the wallets! I will be calling my SA's first thing tomorrow about these beauties! Great buys, congrats!

mytwocents said:
I love the metallic wallets , I bought the mini skinny in blue/purple from Dillards but would much rather one of these wallets!!
The silver on the metallic is very pretty in real life!
Click to expand...

Thanks! I actually got the pink mini skinny and wristlet at Dillards yesterday morning. I wanted the wallet which is why I was heading to the other Dillards after work to see if they had it! I love pink so that was my choice until I saw the silver, it's so beautiful in real life!
C

Congrats! I really love the pink wallet - what a gorgeous colour!
You must log in or register to reply here.
Share:
Reddit Pinterest Tumblr WhatsApp Email Link
Register on TPF! This sidebar then disappears and there are less ads!
Sign Up
Top Bottom