Oh no! My multicolore pochette GM is discolored!!!

I took my brand new MC pochette GM out today in preparation to use it during my upcoming trip. I noticed a red stain on it. Then I looked closer and realized that the red was bleeding from the inside of the pochette and went all the way around the edge!

I read on here that there was an issue of the liner bleeding and the canvas turning yellow due to the glue that they used in the earlier batches. But I thought that was corrected by the 2006 batch...I guess not!

I took it to my local LV store in Riverside Sq Mall in NJ and spoke to the assistant manager. She said she would have to send it out to their repair shop to have them examine it.

I hope they do the right thing and either give me a new one (which may be hard since they dont make it anymore) or give me store credit to get something else.

My pochette GM was made in mid 2006. Is there anyone else on here who has the M C pochette GM made around that time that has discolored?

I am so bummed. I got it just a few months ago and have never used it.

Wow. There's not one person who's had a problem with their MC pochett GM? Am I the only one??

I don't have it, but so sorry to hear this

i have a multicolore pochette MM.. and have not had this happen to mine..
i'm sorry about what happened to yours..
the interior of mine is mushroom color (alcantara?) though, not red..

is this the style you have (but in GM)? 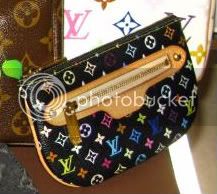 Yes. That is the one. I have the large one in white and the black one in the smaller size (same as the one you show in your photo).

I dropped it off at the local LV boutique almost 2 weeks ago. I called them today to ask if the repair shop came back with whether my pochette was defective...which I already know it is. It is a known problem. i dont even know why she didnt just give me credit for a new one or give me a new one.

I spoke to 3 different people, all very snippy. I am not happy with the way this is going so far. I tried to explain that I was going out of town for a few weeks in 2 days and wanted to know whether they heard any updates. Instead of letting me finish, the snooty SA cut me off and asked me for my name and number...again. I gave my name and number to 2 other people before her. I am spending good money at this store and my business pays her salary and I would appreciate it if they remind SAs of this every once in a while. Depending on how this turns out, I may be sitting down to write a very long letter to the regional manager of LV north america.

It's not up to them at the store, they HAVE to wait to see what the repair shop says. There isn't anything they can do to speed up the process either. Sorry

I believe they only did exchanges and free repairs on the ones that turned yellow. That was the glue issue.

The bleeding (pink + red ones) isn't a glue issue, it's a lining + humidity + your bag is white untreated canvas issue.

White bags are an eminent fail.