Not Quite Sure Why Or Where You Would Wear This Dress But... 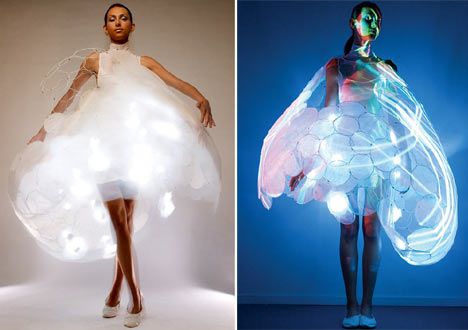 The Bubelle dress changes colour depending on your mood

The Bubelle Dress is made up of two layers, the inner layer contains biometric sensors that pick up a person's emotions and projects them in colours onto the second layer, the outer textile


The sensitive dress, which was designed by electronical giants Philips, works by monitoring physical changes associated with different feelings.
Emotions such as stress, arousal, or fear affect the body's temperature and sweat levels and these generate the light that changes the pattern and colour on the dress.
Ingrid Bal from Philip's Design said: "You could programme the material so that it turned red if you were angry or stressed, or green when you're calm."
Should the prototype ever hit the high street it would help British couples to communicate better.

It was developed as part of the SKIN Probe Project, a research programme concerned with what lifestyles might be like in 2020. Time magazine named the impressive clothing as the best fashion invention of the year.
Ms Bal said: "We were interested to see how technology may affect our lives in the future and to provoke debate. We are asking: 'Would the idea of emotional clothing be something we will wear in 10 years time?'"
Scientists at the Dutch firm also designed electronic tattoos which could also change design based on mood as part of their design project.
A spokeswoman added: "In much the same way as make-up is put on and taken off to suit the occasion, a tattoo could alter whenever desired. "The tattoos could even change in response to gestures or emotions."
•••

I'd wear it to the right kind of party in a club, but I'd die if someone spilled a drink on it!
•••

I think it's pretty! Something like that would make a cool Halloween costume...I don't think anyone in this world really has a normal place to wear that, though.
•••

My luck, Halloween would fall during the week of my period and I'd be walking around blinking from raging mood swings.

My luck, Halloween would fall during the week of my period and I'd be walking around blinking from raging mood swings.

Oh, come on! I think it's pretty

Pretty weird, really, and I'm not sure the world should know what kind of mood I'm in all the time

I'm reminded of those t shirts that that changed colors by your body heat.

what was I thinking, Look at meeeee You can see where I'm the most sweaty. The dress is interesting....and practical

The technology is def COOL!
•••

If I was a 6 foot tall amazon woman, I'd totally get it!
It's just thing my circle of nerdy/geeky friends would find absolutely fabulous!

I dont think the idea is really good..
can you imagine if you wear that kind of clothes while you meet someone you hate but you dont want to let them know, such as your boss, teacher, or probly your MIL?

I'd LOVE to have this dress, not to actually wear it, but to use it in a theatre production!
•••

quite an interesting concept!
•••

Cool concepts BUT who on earth would want to ADVERTISE their mood to the world?
•••

My SO bought this for me after our last arguement! LOL!