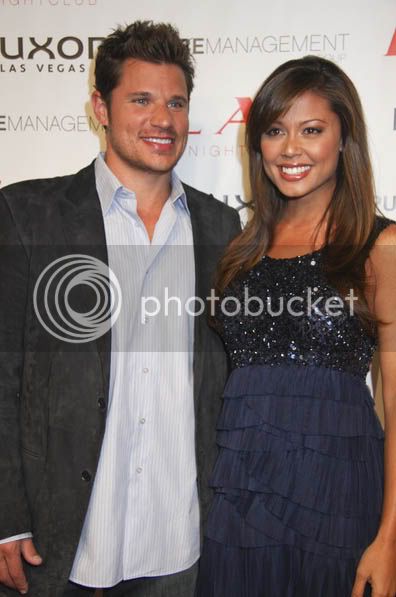 Nick Lachey and girlfriend Vanessa Minnillo are on the verge of splitting. The couple has been trapped in a break up-to-make up cycle, and now Nick is fed up with Vanessa constantly pressuring him to marry and give her children. And he came unglued with the former MTV host accused him of still being in love with ex-wife Jessica Simpson, pals reveal.
Their problems were on public display March 25 at the trendy restaurant Katsuya when they sat in stone silence for more than 30 minutes after having what appeared to be an argument, according to an eyewitness. As they left that night, Vanessa was in tears sitting next to Nick who was gripping the steering wheel of the car.
Three nights earlier, at a birthday bash for basketball star Baron Davis at the Stone Rose Lounge. Vanessa had a good bit to drink, and she turned into a *****y high school drama queen, said an eyewitness. She was rude to some people and then flirted with a bunch of athletes, partying like a single girl. She was hanging all over other guys. Vanessa was rude to fans who wanted her autograph. She spent half the evening sneering at other female guests. From what I saw, its not wonder Nick is sick of her.

These two are so freaking annoying !

I agree, do they even work anymore?

Ergh. I agree.
I never really liked them together anyway, there's something about her I just don't like.

Oh, I liked them together. Bummer!

Lvbabydoll said:
Ergh. I agree.
I never really liked them together anyway, there's something about her I just don't like.
Click to expand...

Sorry i just can not get past Newlyweds... I loved that show.

i think she's very pretty but that's it.

Lvbabydoll said:
Ergh. I agree.
I never really liked them together anyway, there's something about her I just don't like.
Click to expand...

Doesn't she know that shes the rebound girl?

lol nobody likes being a rebound! the poor girl

Yes, she is the rebound girl. I never liked the way she always pressured him. He will always love Jessica, natrually, now if he's still IN love with her thats another thing... I dont think Jessica would mind that either...

Sorry i just can not get past Newlyweds... I loved that show.
Click to expand...

Haha! Me too. Is it mean to say that Vanessa was most likely a rebound and that Nick can't put up with it anymore....

vanessa must be pretty think to think that a recently divorced man who just ran head first into a relationship would want to wife her? is she that stupid?

she set herself up for failure. Nick needs time, just like anyone who was out of a serious relationship.