I got a dark brown city today and i was just searching http://ateliernaff.blogspot.com to check which colour I had and then I noticed that Citys are supposed to have a silver tag inside? Mine has leather! I am so confused.

I have b-bag issues

Are you sure it's a City? Where did you get it? Can you post pics?

What year/season is your city from? There were some cities that just had leather with no metal plates in them, like the metallics from '04...

I dont know which year. I got it at Harvey Nicks :/ 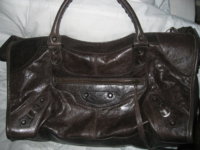 I have b-bag issues

Seriously? Ok that explains it. They said it was a city though in the shop. They had Blue India and Black in the part time and brown and dark green in the City. That's exactly what the SA told me so I assumed I had the City!

i dont know much about tags....

I can tell you that is one GORGEOUS bag! congrats!

Aw thank you! Yes I really love it, and it's my first one (as you can tell). I love the colour. How embarrasing that I didn't know which size I bought though

Don't worry about not knowing the size. A lot of SAs don't know themselves and instead of admitting that they tell you stuff that's not really true...

Yep, it's a Part Time, and the Part Time has the "leather only" tag - no silver. Congrats!

It's very pretty, I prefer the PT, actually, the longer strap and all that

Just wondering if anyone can help me out.

I just got my first B-bag (Blue 05' Twiggy) and am really stuck on where to attach my mirror.

I really want to make use of it, and not hide it away.

Any suggestions/ pics on where to put it?

I've attached a pic of my bag too for anyone who wants a peek...

painauchocolat, I see you're in the UK, so I can confirm that's the Part Time, which comes with a leather tag. I can further clarify that (for reasons beyong my comprehension) they call the Part Time "City" in the UK, and when pressed, they'll say "It's the City, but larger, but not as large as the Work/Office."

Apparently the name "Part Time" name was not introduced or used in the UK. I learned this the hard way when I was ordering my Special Edition Antique Gold, which the Selfridges SA kept telling me was the City, but then kept describing the Part Time. Every time I said that it must be the Part Time, he had no idea what I was talking about and said he'd never heard of Part Time.
You must log in or register to reply here.
Share:
Reddit Pinterest Tumblr WhatsApp Email Link
Register on TPF! This sidebar then disappears and there are less ads!
Sign Up
Top Bottom