Well this reporting back on my second ever trip has been delayed due to my poor brand new camera breaking it's nose and having to be sent away for surgery. Whoever would have thought that the edge of a big pouffy, smooshy ottoman wouldn't be a safe spot to leave a camera, hmm?

ush: So unfortunately I had to go away without my camera as it broke four days before my trip, but now that it's back I'm able to share and show off my new thingoes and a couple of my friend's pics of me at the store!

I'd planned on making a purchase on my second trip, and after considering the Multicolore Noir Pouchette MM and the Damier Koala Change Purse I settled upon the Trunks & Bags Mini Pochette, which I adore! I called ahead prior to my visit to ask them to put one aside for me, and when I saw it it was love at first sight. I adore it, and it goes so well with my Congo PM they might as well be made for eachother!

The other thing I purchased was a black small sized luggage tag for a friend. This is my friend with whom I stay on each trip to Brisbane, and also the one who I converted to LV with my first visit there last time! She adores LV now and has a wishlist almost as long as mine but hasn't made a purchase yet, so for her birthday I bought her her first LV item. Just a small thing, I'm not rolling in it and the trips away are expensive, but I had the idea of getting a luggage tag heatstamped for her as a special bag charm or keyring! The lady serving us, Elaine, is an absolute darling and searched the store high and low to find this small black tag for us, I was over the moon when she found it. My friend's name is Gemma and I had a great big 'G' in red heatstamped on the front, it looks amazing. Gem was actually supposed to be out shopping with me that morning but went home early on feeling sick, which worked out really well because I was stressing about how I'd organise the luggage tag for her whilst she was in the store too! Hhahaa it was hard to look sorry for her when she told me she felt too tired and off to keep shopping, it was like.. "oh no.. oh dear.. okay see ya later then!"

Whilst talking to Elaine about organising Gem's luggage tag I asked her to get my Panda Clefs heatstamped too, and.. my Congo PM! She had a look at the bag and we talked about where I could possibly get it done, and we decided right at the top of the buckle strap. The other option was the other end, at the bottom, but it was much more striking at the top. She checked with the other lady who said it was flat there and would be fine, so I've now got a medium 'L' there in gold!

The whole day was such fun, we were in and out of the store three times that day going back and checking up on the heatstamping, and Elaine was fantastic with us the whole time. She brought out some bags for us to try whilst we were waiting.. I got to play with the Damier Papillon 30 and the Tulum PM, both items from my wishlist, and also I had a look at a whole bunch of purses as I've been considering using a 'real' wallet instead of my Damier Koala Agenda & Cles. I came away with a new item on my wishlist though, the Damier Hampstead MM... absolutely stunning. It'll definitely be my next LV bag purchase, for sure! By the end of the day the lovely doorman was laughing at us for being in and out, and when we told him upon leaving for the last time I'd not be back for a few months, he just grinned and said "see you tomorrow". Well he must have jinxed me, because the next morning when I was supposed to be driving home I just didn't want to leave, so stayed until Monday morning instead. So what did I do that Sunday? Took Gemma to the store, since she'd missed out the day before! And yes, he laughed at me again when I came back in! Gemma was carrying her luggage tag attached to her Alannah Hill bag which coincidentally is black with red trim, it looked amazing! Am getting her to take a pic for me at the moment.

She'd loved the surprise pressie.. when we got home that Saturday afternoon both my friend and I were loaded with bags as Elaine had been lovely enough to give Nicky her own catalogue in an LV bag with a ribbon too. Gem saw all the bags and of course started investigating what was in them all.. when she get to her box I just said that this one was a very special purchase I'd been planning for ages, because it's.. for you!!! She loved it, it was something small but so much fun to arrange and she couldn't stop playing with it for ages!

Overall it was a really fantastic time again, and I can't fault the staff there at LV Brisbane. They're all darling, and Elaine actually called me after I'd left the final time to see how the heatstamping went and to say thanks, because on our final visit she'd been with another client and couldn't pop over. She was so sweet I sent her a big box of chocolates and a card after I got home, I hope she enjoyed them. The heatstamping on my Panda and Congo came out fantastic. I thought at first the 'L' on the Congo was off-centre, but she'd centred the spine of the 'L' rather than the whole letter and I'm used to it now. I love that it's mine, it's so subtle but looks fantastic near the gold hardware there. Here's me and Gem.. You'll have to ignore my 'driving home' clothes, I only packed niceys for one night and one day! I was dressed much prettier the day before but didn't get a pic!

I'll be taking some new group pics of all my LV thingees now, as I won't be buying any more for awhile until I can save for that Hampy MM.. I actually took some whilst I was taking those, but my camera seems to have eaten them.. :wondering
Stay tuned!

Awww you look so happy outside LV!!

I'm picking up my puppy on the date of your next visit (so I will be headed west) - but make sure you go to Jean Brown too!

wow. I'm amazed by your purchase. I love the trunk mini pochette & the panda key chain. I'd always wanted them. Congrats.

Ahhh Bella I know what Jean Brown is now, there's an article on the lady whose shop it is in this month's Madison! Will definitely be headed in there for a visit.

And here's a couple of shots of my entire LV collection.. altogether now, people.. "aaawwwwwwwwwwwwwww.." 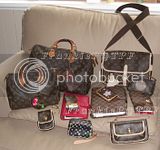 Hey, I've just counted, now I have six limited edition pieces. Can the Damier Koala Agenda be considered LE too since it's no longer made? Or just discontinued?!

Thanks for the great report!
I love your Congo.

Great Purchases! The T&B mini Pochette is too cute

Awwwwwwww....LOVING your collection! You both look gorgeous! Thanks for sharing.
L

I'm glad that you had a great time!

Cute pics! I love the mirage speedy in the background!
S

Congrats ....glad you had a great time .. Zane the security person is one of the nicest people in the store