My Review of the New Galliera GM ....with Pros/Cons/Pics !!

When I first saw the S/S 2008 Lookbook last Dec., I never gave the Galliera a second thought....that is, until I saw it in photo ads of magazines, where it really looked beautiful. For those of you who remember, LV did a similar hobo-style bag called the Croissant, which came in 3 sizes, which was discontinued a few years back.

I like to carry lots of things with me, and since I always get cold, I drag around a sweater or hoodie jacket with me at all times. I knew it would be the GM size that would probably suit my needs, but I really had NO idea just how HUGEONGOUS this purse is....

The Galliera GM at first appeared as large as a beach bag to me....sooooo BIG. But once it actually sits on your shoulder, it "slouches", so it somewhat shrinks from the fold of the bag. However, if you look at it directly flat on the side, it can really be overwhelming in size.... 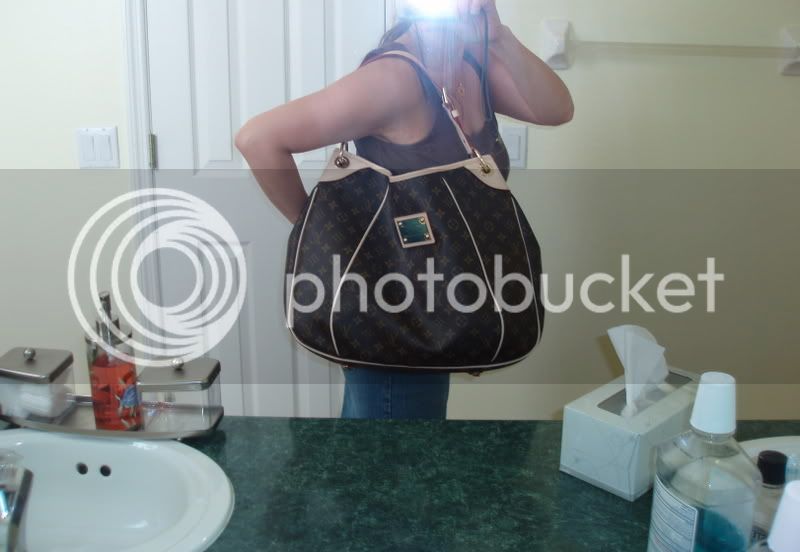 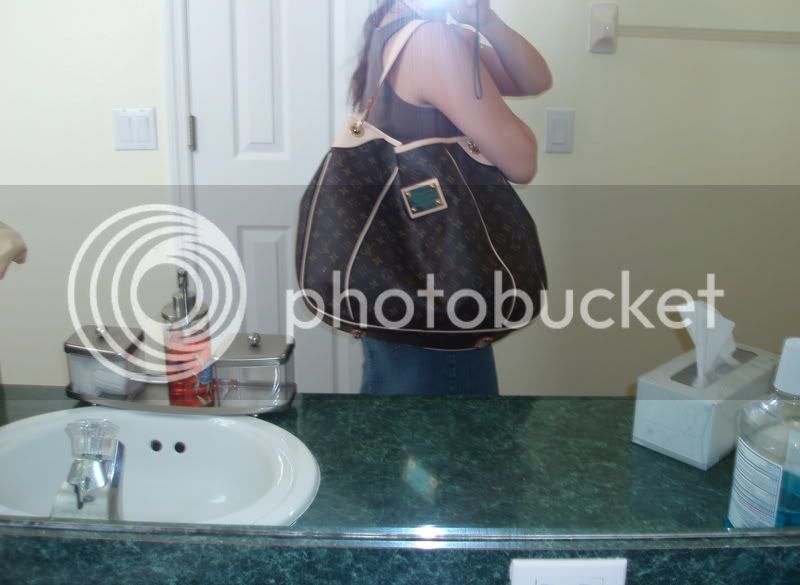 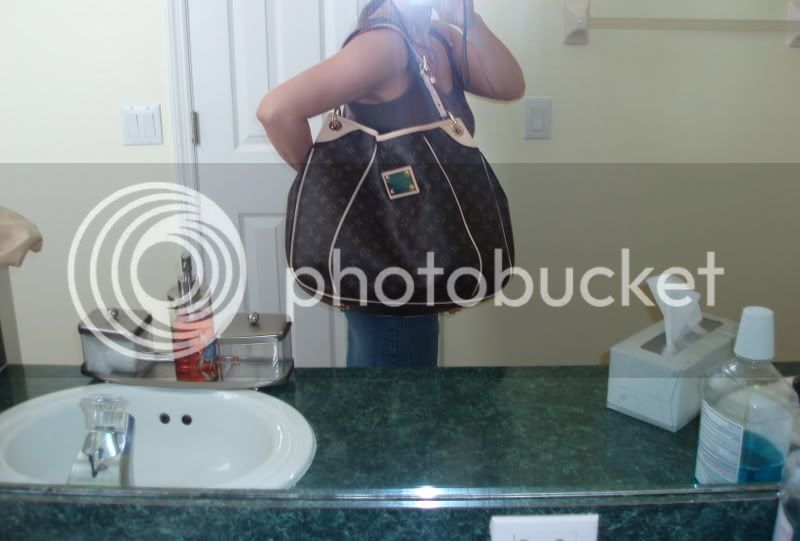 Now I have read some threads about how the Galliera doesn't close properly because when filled, the magnetic closure doesn't align correctly....this it true for the GM as well, but in reality, you don't need to secure the bag with the snap because the way it hangs, your arm really covers the top of the bag well enough. I will say, that it "feels" better when the snap is on when you carry it.

This photo is of the bag (filled with my junk) with the magnet snap shut: 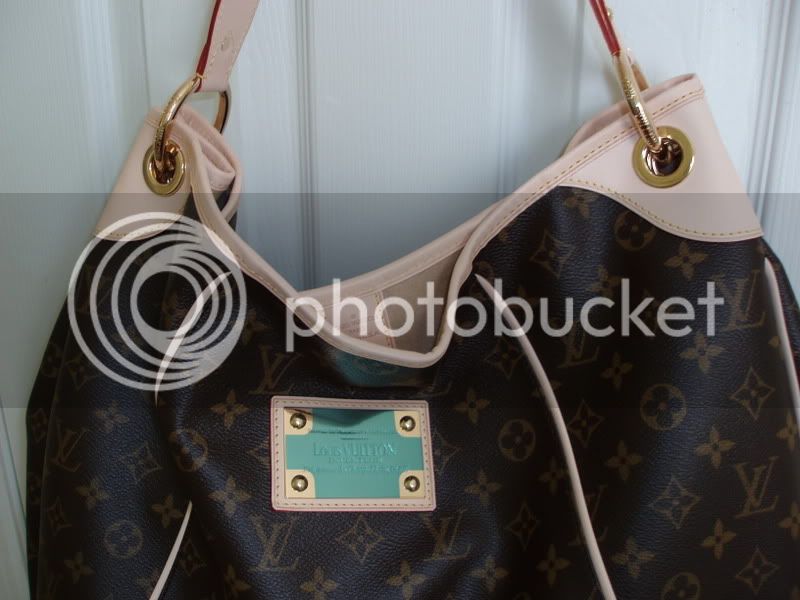 It does tend to "pull" the bag since the shape of the bag is rounded, and so the weight keeps shifting.

This photo below is the bag hanging with snap shut. : 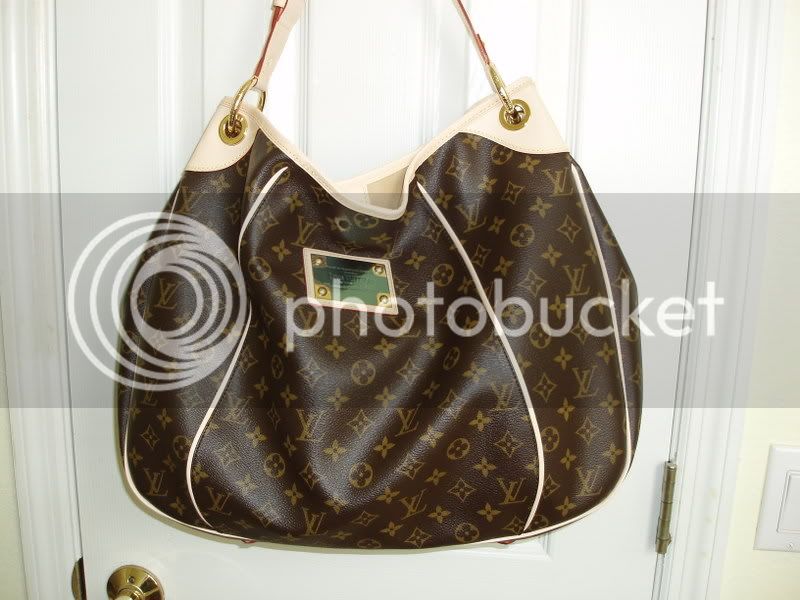 And here is a photo of how the bag looks (filled) but with the magnet closure UNSNAPPED: 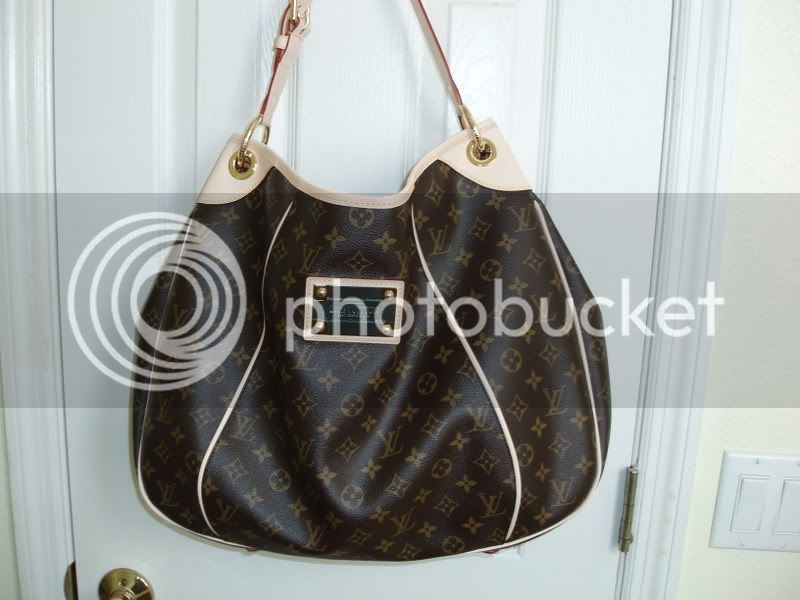 I also find that the L'Inventeur plate is HUGE on this bag....I would have preferred the little "louis vuitton" script plate that is on the Sunset Blvd, since the plaque will definitely "ride up" and bend to hit your elbow: 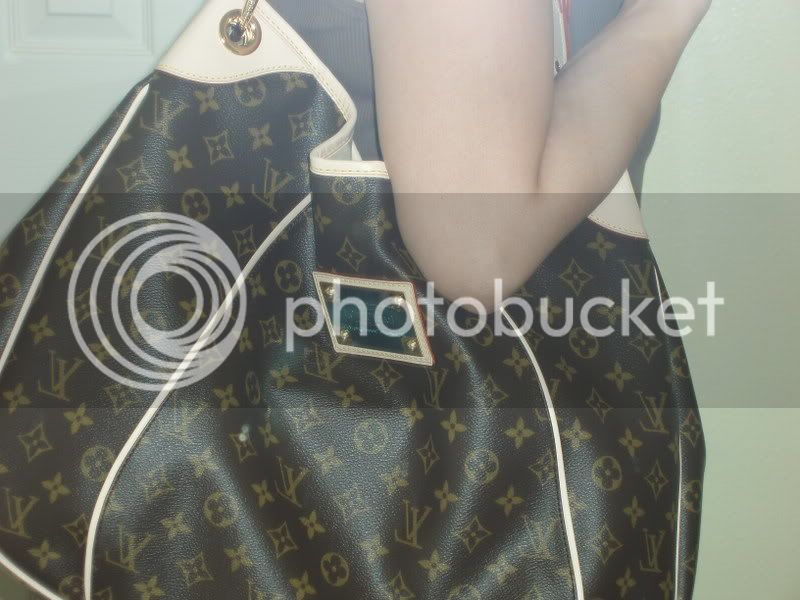 And just for the sake of comparison, the L'inventeur plate is almost the size of a business card !!!!!! 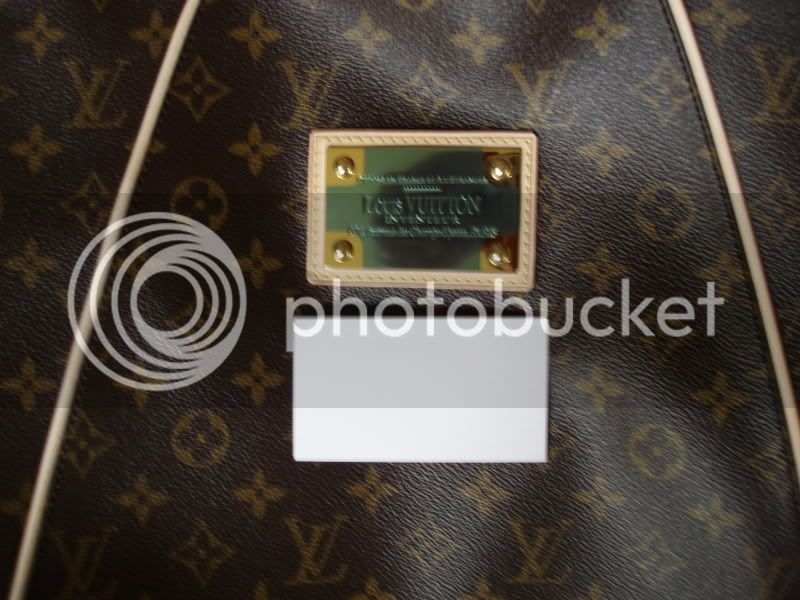 Great review and pictures... I think the bag looks great on you though!

nice bag are you going to keep it?

Thank you SO MUCH for that review and the great pictures!!! I love looking at the bag, but I just don't think it's right for me...my wallet thanks you.

I think it looks amazing on you and I'm sure you have plenty of room for a sweater or five?

Nice pics, travelbliss, & thanks for posting! I just can't get enough of new bag eyecandy!

Great review! Thanks for taking the time to do so!

Ok...now most of you know what the inside of the bag looks like...it does have cell phone pocket and a large snap section. I'm not crazy about the thin feel of the lining, but most of all, I think the color will get dirty easily, since the bag is basically a half-open bag. It is lighter than the Croissant GM, but that's because the Croissant GM was lined in a heavy dark red/raspberry alcantara lining that I didn't really like, and it added un-needed weight to the bag....

Here is my LARGE purseket inside the Galleria GM....it totally dwarfs in size, with extra room.... 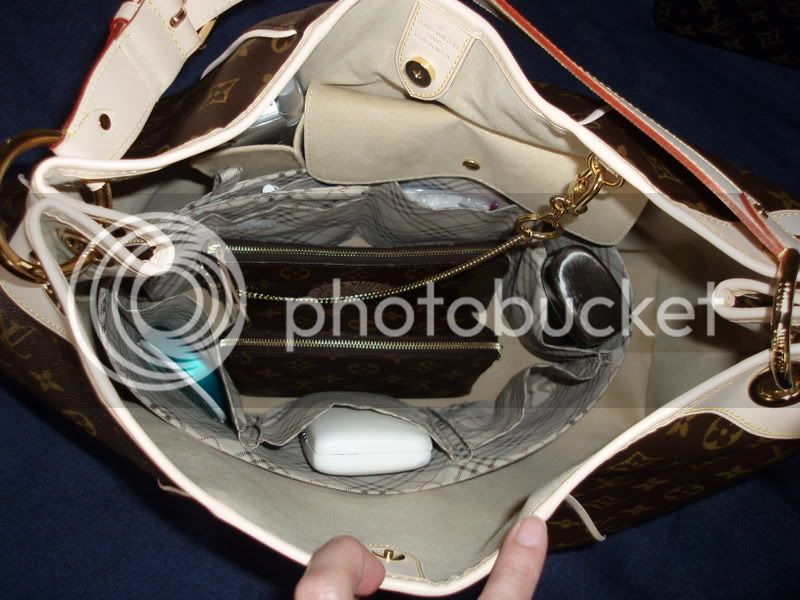 And for size comparisons....Here is the GM next to my Mirage Speedy 30 Noir : 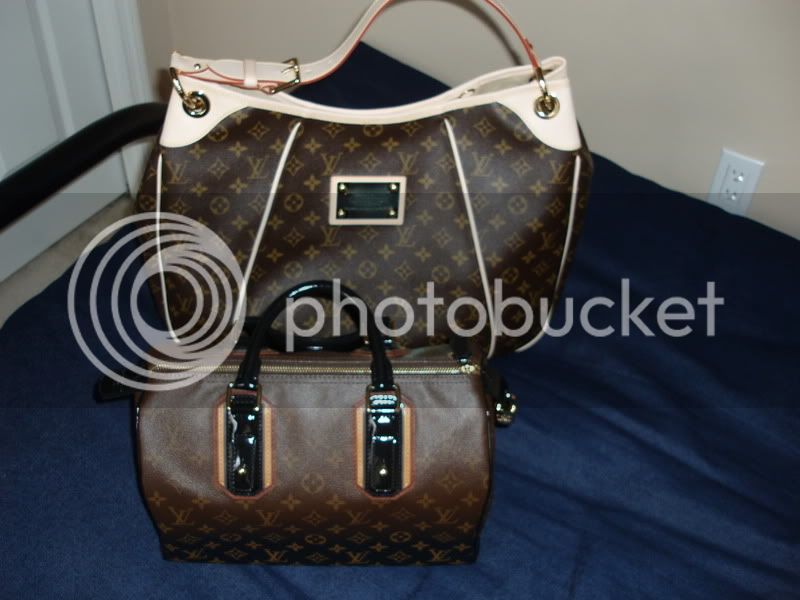 And Yves Saint Laurent makes a bag called the Muse, and this is my black patent Muse in the largest size (called the YSL OS "oversized") and it again seems small in comparison to the GM: 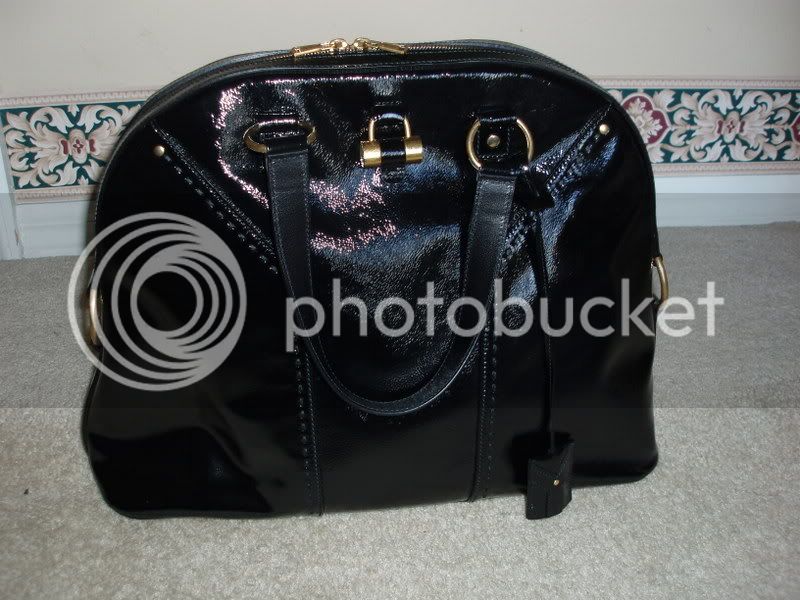 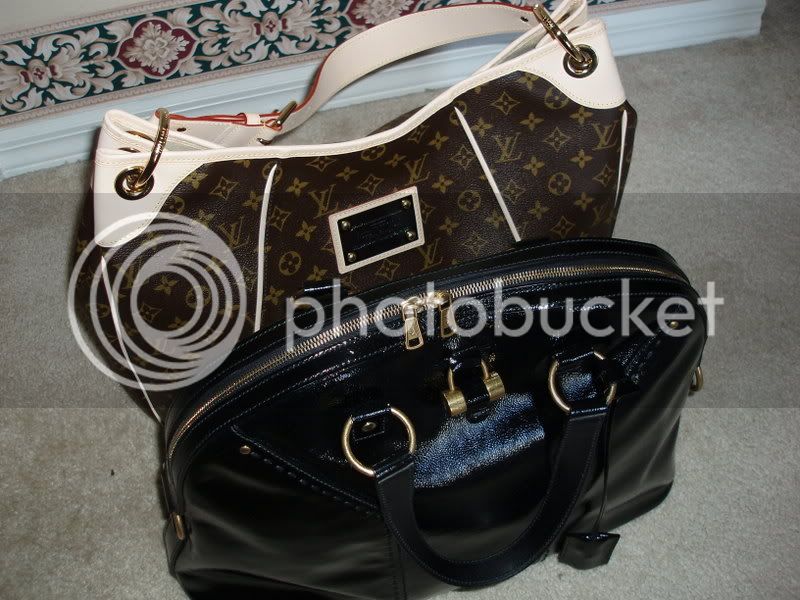 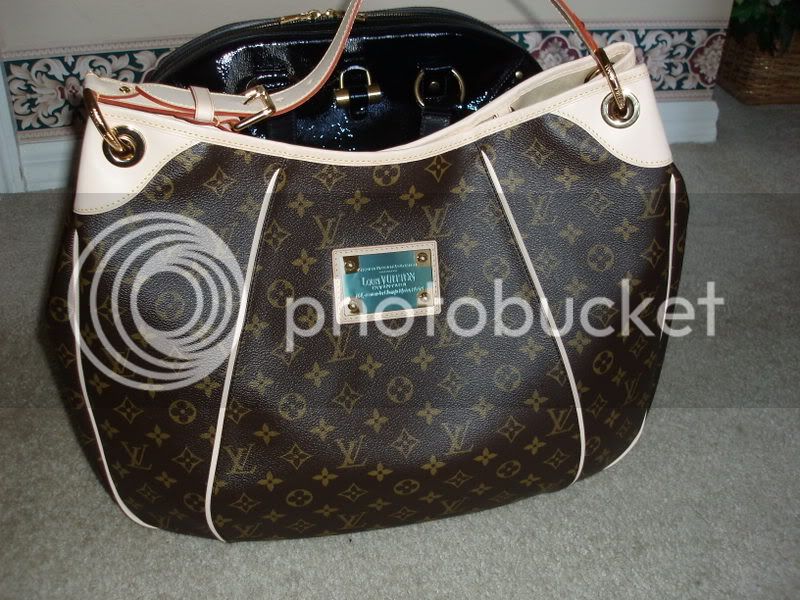 You can actually "hide" the Muse behind the Galliera GM !!! lol....


I'm 50/50 about this bag......half of me wants to KEEP it....the other half says I will get tired of the size and once the lining gets dirty I won't be happy....
As many of you know, I prefer France made LVs, and this is not....
I LVoe how incredibly light it is, believe it or not !! The strap is nice and W-I-D-E
and on the shoulder it feels fabulous !!! Even with all of my junk, the strap really helps to lighten the load....
The metal plate may or may not drive me nuts over time....
I also LVoe how the bag has FEET !! It sits on it's own, and that is RARE for a hobo !!!
I also imagine how gorgeous it will be once the vachetta sets in....

Holy Huge Bag!! that is massive

ya know what...i wasnt too fond of this bag until i just saw it on you! it looks sooo perfect on you! keep it =)

OMG. so jealous right now. i really want the PM!!!!

you have time to think about before your return period runs out but always the enabler here have you considered seeing if they can track down a manosque GM you said you liked it in tinks thread and it's big too that could make a good alternative
Click to expand...

The World is my Playground!

It looks great on you, good luck with your final decision!
P

I think you should return it and get a PM size. With a PM size, I still think there is room for a sweater. I am like you and always carry large purses because I always need a small/light weight cardigan. I think the GM is HUGE and will dwarf you and over time...you wont like it.
P

I hope you keep it though, cause you wear it very well !