Miss Mabel and I were talking cats earlier on and thought it'd be nice to start a thread where we can share photos of our gorgeous feline friends.

A bit out of the ordinary as this is a purse forum, however quite a lot of us seem to have cats.

Mr T found that sometimes reveals take too long on the purse forum....

I have just the one Milo who is 5 and likes handbags and shoes almost as much as me, lying on them or in them at every opportunity being a new Mulberry owner I need hints on keeping him off

Unfortunately both his front legs were broken when he was born and have healed with an overlap so he slopes down at the front, he is not the brightest button in the box either but is my baby

Littlestar and didih - your cats are so cute!!

My cats love bags and boxes!! The younger boys will squeeze into the smallest ones and peek out the top. Bless them. xx

As you can see, he is now king of the outdoors after his little escape back in December!

Great idea for a thread guys. Mulberry girls obviously have good taste in animals too as all the pussy cats on this thread are beautiful!

Little star my cat Gadget also loves relaxing on the computer... the laptop sits on a little stand and he loves resting his chin on it and going to sleep. I will get a pic of him next time he does it... he also loves chatting on Skype and standing on the keyboard!

Gaget is nearly three (we think) and has lived with us nearly a year after coming from an animal shelter. He thinks he is a dog, likes chewing post and climbing as high up as he can and is obsessed by cheese and mayonnaise (not that he is allowed it!)

We have also adopted my dad's cat for 3 months while he is on an extended holiday but the two aren't the best of friends yet. They ignore each other all day and then chase each other all night!

Wil get some pics of her (Manta) and put them on soon. 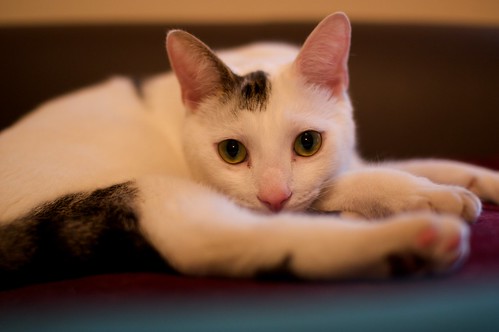 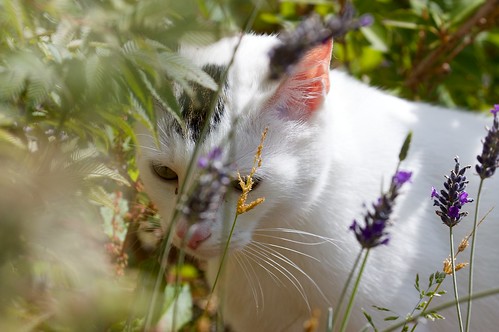 Was he an indoor cat before the escape??

I'm really paranoid about Pippin going outside still. He goes out the back and i'm certain he leaves the garden but I won't let him out the front. I'm scared he'll get lost although logically I'm pretty sure he'd be fine! xx

Your cat is so pretty Loubylou!! xx

Okay I have a lovely mad Bengal called Zach who is only 8 months old and a grey tabby called Minnie who is only 7 months old. I need to take some more recent pics and will post them on Friday (my day off). Lovely animals... and great fun. Zach is my avatar

Thank you loopylou! Great name too

can't wait to see pics piglet... is Zach very noisy? I heard Bengals are very good at getting themselves heard! Beautiful cats though

Was he an indoor cat before the escape??

I'm really paranoid about Pippin going outside still. He goes out the back and i'm certain he leaves the garden but I won't let him out the front. I'm scared he'll get lost although logically I'm pretty sure he'd be fine! xx
Click to expand...

Yes, he's a beautiful cat. He looks very much like the Russian Blue breed, but he was a stray.

He always went out in the back garden but never ventured outside the fence. Or so we thought anyway! He isn't allowed out the front door as the road is too close.

KLP - Same with Pippin, he's still a bit of a dopey kitten. Don't think he understands cars. He gets scared of people outside of the family so that kind of explains what he is like! xx

My Sam is the same, has been since my dad who is 6' 4" scooped him up in his arms on meeting him. Sam's tail immediately puffed up and he jumped down and hid under the sofa until my dad left. Clearly the experience traumatised him! Now he won't come out for anyone buy DH and I. Miss M scares him half to death too so she can't even pet her own cat!

Bengals are a lot of cat.... as the woman at the CPL shelter says but I love that..... I have had siamese before so they were vocal..... He's more a cat dog as DD calls him.... if you throw straws he runs after them and brings them back

All these beautiful cats makes me want more....
B

My first born Nelson is in my avatar he's a British Blue. My other cat is Monty - he is a white tipped British shorthair but he thinks he is a sheep and bleats very loudly.

Both of my cats are indoor cats and very very stupid
I know this is about cats but can't resist showing you my little girl. I keep being told that labs are very intelligent but we have yet to see any sign of it in Coco.