If this has been mentioned before, I apologise, but I did do a search of this thread.
Surely the most important movie with Hermes should be Alfred Hitchcock's 'To catch a thief'.
This is the film where he allowed the designer, accompanied by Grace Kelly, to shop for Hermes accessories. Grace Kelly fell in love with what was then called the Sac à dépêches à mains. She bought some for her own use. Its style became closely linked with her and the name was officially changed some 20 years later.

Even if it does not seem to appear in any if the usual stills from the film, it is the point where the association started.
Last edited: May 3, 2021 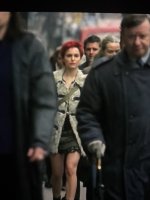 Whaaaat I love this film! But a bit surprised, an Hermes belt doesn’t really fit this character...

louise_elouise said:
Whaaaat I love this film! But a bit surprised, an Hermes belt doesn’t really fit this character...
Click to expand...